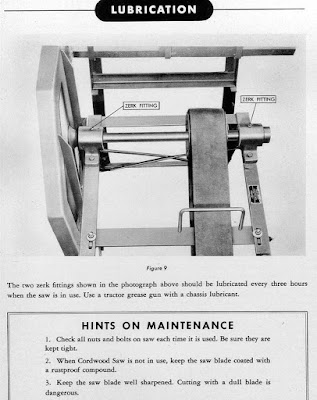 Well adventures in God's supplying our needs, was sort of like getting injured in picking up a bag of gold as when the guy loaded the old buzz saw, he made  a mistake and dented the roof of the pick up with his loader.

All that glitters is not gold.

I got to study the saw when we got it home. It is quite heavy, but it also had two bolts about 18 inches long as stakes to keep it from flying around when a belt pulley was put on it.

It is rather rudimentary and not like the Ford Dearborn equipment manufactured by Henry Ford back in the day. My Grandfather had a buzz saw and I have it now. It was constructed nice with wood, but needs wood now, and the table did not move. The one we picked up for 25 bucks, had a nice table to load wood on and push it into the saw blade.

It looks like all it was, was the saw and pulley, and then they put metal pipe leg on it. It must have been some local blacksmith who built it all, as it is functional, but this thing looks like it came out of the World War II era or before.

What I wanted to know is the saw rotates on a bar or axle of metal, but there is not any zerks to put grease in, just holes. The saw was froze, but I got it to move, put in some Valvolene 10 w 30 oil and kept at it, and pretty soon the oil was disappearing in the opening closest to the saw blade, with the other more puddling it.

I knew that oil was not going to do it, but I also figured that grease was not going to work either as grease pretty much needs to be warm in order to lubricate, and unless I got this done in 80 plus degree weather, I was not going to get any lube on that axle, which would wear it out. There is grease on the saw blade side which ran out and was old as the hills, but old axle grease is all they had, and again I was thinking more on 90 weight outboard motor type oil.

In looking around online though, a manual from the Ford Dearborn saw, put it pretty simple:

USE A TRACTOR GREASE GUN WITH CHASSIS LUBRICANT. 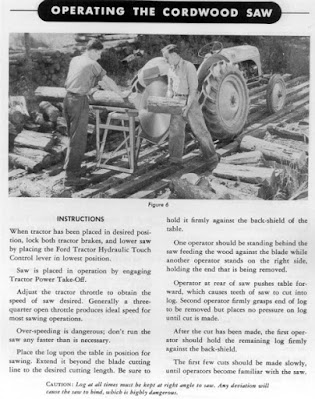 Chassis is not exactly a common word now, so I looked it up.

Oct 1, 2019 ... Chassis is the base frame of a farm tractor on which all the components and assemblies like Engine, Transmission, Tires, Front Axle, Steering ...

What is Tractor Chassis - SlideShare

OK so the chassis is the frame that everything is bolted to. My experience with tractors is Farmall International, and our greases were lithium based, black greases usually, except when we had the pretty red Mystick greases. All grease is not the same, but the old axle grease or the lithium greases were a not as sticky as the bearing greases for packing bearings, but a grease once it was worked, it would become more viscous or fluid.

Now for this situation, I would think that a molybdenum which is a lubricant rock used for firearms and greases, like graphite. I would think the synthetics would work too, the newer wind turban greases would probably be wonderful, but where would one get that at an affordable price. Mobil runs this at 14 dollars a tube. Granted a tube might last me years, but that is some expensive grease. In looking at the spread sheet this grease is not that great and is a lithium complex, In short, why you are paying 3 times for your electric is because Mobil is filling all these wind towers with mediocre grease, as just like the vax, that is where the money is at to make the profits.

I'm going to bother TL a bit on this as TL is a chemist and an expert on this stuff, and TL says I want a synthetic grease of low temperature viscosity. I have no suggestions on that, but I probably am going to go into the farm store an stick my finger in the grease tubes and not get yelled at to see what feels right to me. Honestly, I'm wondering if some STP oil treatment might work as that is synthetic, semi viscous and it is sticky, but not so sticky that it will not run. I want it to coat things, but it better not be so sticky that it will be a bitch in cold weather to get moving.

Worst part is, the old black axle grease which was like butter is probably what would work, or I could frick around adding some automatic transmission fluid to a synthetic grease which would coat the parts and not be too sticky, to create my own wonderlube or in German, vunderlube.

It is a starting point which is more than I had before.