The Crimes the FBI Created 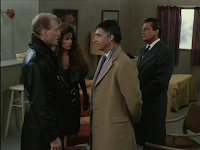 With the new directives by the Biden regime, led by Attorney General Merrick Garland and the Trump appointed Director of the FBI, Christopher Wray, implementing a Soviet and Nazi styled policy of having Americans spy on and inform on their family members, there is a disturbing pattern involving the Department of Justice which is proven by the following headlines.

From Conservative Treehouse comes this headline revealing that 12 FBI operatives were involved in the plot to kidnap Governor Whitmer of Michigan. Reports have surfaced that the main recruited person of interest from Ohio was a mentally retarded male who was guided by the FBI.

Then there is the infamous case of the popular Hal Turner of the American Socialist movement in court under examination revealed that he was on the FBI payroll and was encouraging the posting of rants online which made people a target of the FBI.

Nov 29, 2009 ... TRENTON (AP) — A New Jersey blogger about to stand trial on charges that he made death threats against federal judges was apparently paid ...

Then there is the case of the Oath Keepers was an FBI section chief, which the FBI is now indicting that group for January 6th protests.

Then there is the case of Pete Santilli in the Oregon Stand Off, who was the source of FBI evidence against Ammon Bundy, and who Gordon Duff on Rense.com stated was as FBI operative.

In a strange bedfellow evolution. Pete Santilli was tehn involved with the Hoff brothers of Gateway Pundit, a Trump advocate.

Where was the FBI during Oregon armed standoff? Out of sight but ...

Jan 28, 2016 ... A significant amount of the FBI's information used to charge Ammon Bundy came from an activist named Pete Santilli, who was living inside the ...

Apr 13, 2010 ... The FBI decided to infiltrate the Hutaree Christian militia after becoming ... over what it saw as the Hutarees' most dangerous asset: explosives.

Lastly, there is Terry Nichols of the OKC bombing, who is on record stating that at the center of OKC was an FBI operation. If you recall a stlll breathing Tim McVeigh was alive when they pulled the curtain on astonished reporters. Terry Nichols was not executed for the reason, that he had hidden bomb making materials in the floor of a house. How this spared Nichol's life was the fingerprints on the materials were those of an FBI ATF operative who supplied the bomb making materials.

The FBI has not yet revealed the numbers of undercover operatives and assets which were at the US Capitol instigating the riots. Evidence has been produced that someone was opening doors in the Capitol with the assistance of the Capitol police.

Ashli Babbitt was set up and murdered in this staged riot, which the police are recorded both assisting people entering the Capitol, not doing anything to keep the peace, and worse yet punching people in order to get them angry.

This all moves to a disturbing reality of  the vanished DC Pipe Bomber, who avoided surveillance to hide their identity, navigated DC without a GPS, and appeared to be a trained government oriented employee, so the question on the above, in all of these FBI operatives involved in some of the most heinous criminal acts, was the DC Pipe Bomber on the FBI payroll?

The fact is in all of the above and more, no violent events would have occurred if the FBI had not been driving the violence forward.  This is not preventing crime. This is creating crime.

The corruption in the United States is so broad that there is zero oversight in any of this. We know at Ruby Ridge that murder took place when Randy Weaver told the FBI that he was not going to endanger himself and be an informant setting up other people in Idaho.

Remember the murder of LaVoy Finnicum, it was an ambush and it was FBI SWAT members who shot at Mr. Finnicum who was unarmed first. The FBI fired first and laid the blame on the Oregon State Police.

Not one federal employee has ever been charged in any of these abuses of power which have involved numbers of Americans murdered. Think of Carter Page, framed by Stefan Halper who was working for the Obama government. Halper disappeared and has never been charged as this corrupt system protects it's own.

The worst propaganda driven stories in the past decades are all due to the FBI and DOJ manufacturing the crime. There is not any doubt about any of this.

None of this is going to change. This is a police state operation which protects the 1% and hunts down competitors. The trends in this are the DIA is fracturing the FBI and DOJ enough with reports of incompetence and corruption, with the expressed purpose of transferring the FBI to a conglomerate arm outside the government on contracts, and this 900 pound gorilla will then be unleashed as the SS and KGB was with knocks on the door at night.

Not one FBI agent or operative has ever resigned over any of this. Not one has ever gone public as a whistleblower. The psych tests are that perfected that no one gets into the DOJ unless they will follow orders blindly in an "Us vs Them".

When in the Whtimer framing, there are 18 people involved and 12 of them are FBI operatives, that is not criminal conspiracy. That is an FBI conspiracy.

Thee astute choice is to stay away from all of these groups from Mike Flynn who has refused to name the people who fed him election theft information inside the government in this Qanon set up to whatever is being propped up and not arrested now that people are flushed from other groups, because it is a reality that 2 out of 3 people in these groups are FBI operatives.

I believe Hal Turner was paid around 50,000 dollars a year for his employment with FBI. That would be 300,000 dollars paid for the Whitmer kidnapping by the FBI to their operatives. Thait is high crime and very expensive crime. Remember that the FBI ATF bragged in Hutatree which made it to the press that they had hundreds of  operatives in every group in America.