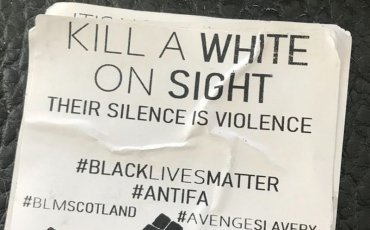 The 1% who have corrupted America for her judgment like western Europe of the Lost 10 Tribes have done so knowing the Bible better than the lost sheep. The 1% knows that God placed on a curse on this Covenant, and those who violate it will be wiped out by God.

So in that, the 1% expects to use God against the People. God is not going to do the bidding of the 1%, but the 1% knows the cause and effect, and that is why they have deliberately gone after morality and Protestant Christianity in America.

As much these frauds on the right who keep spewing "communism". This is not communism. Communism is the buzz word cover for feudalism, the thug state, as why focus on the 1% who stole all the money when you can focus on the Obama Intifada in the Buffett BLM and the Soros ANTIFA to do the reckoning for, while the rich get away with national genocide again.

That though is not going to happen according to Scripture as this is the great reckoning and the rich will be judged as readily as the poor.

The American Contract with God goes back to King Solomon, pledging fidelity to God, as did Adam, Eve, Abraham Sarah, Isaac Rebekah, Israel with Rachel and Leah. Solomon understood the Moses national covenant and the promises and curses of Deuteronomy 28 which are being unleashed on the United States and western peoples of the Lost 10.

All of that America has entered is in I Kings Chapter 9. When you get rid of Jesus, when you start passing manmade laws which legalize baby butchery, apostate religion, sodomy and pedophilia, this national rapine after repeated warnings from God begins the process of Judgment.

The last time America faced this Judgment was in Samaria, and only 10% survived to be driven into exiled slavery.

6 But if ye shall at all turn from following me, ye or your children, and will not keep my commandments and my statutes which I have set before you, but go and serve other gods, and worship them:

7 Then will I cut off Israel out of the land which I have given them; and this house, which I have hallowed for my name, will I cast out of my sight; and Israel shall be a proverb and a byword among all people:

8 And at this house, which is high, every one that passeth by it shall be astonished, and shall hiss; and they shall say, Why hath the Lord done thus unto this land, and to this house?

9 And they shall answer, Because they forsook the Lord their God, who brought forth their fathers out of the land of Egypt, and have taken hold upon other gods, and have worshipped them, and served them: therefore hath the Lord brought upon them all this evil.

I look for the outcome from God in the opening of the 3rd seal, in your daily meals will cost an entire days work. Two pounds of wheat for a days wage, that is what the Bible predicts.That will be a sign in where the progression of this is. God will fulfill when it is the time. So a 5 pound sack of flour will one day cost if the wage is 15 dollars an hour, 90 dollars a day, that would make it 225 dollars a sack of flour.

You see prices like that and you will know the time line position as events fall upon events.