Fire in the Sky

The Brier Patch at 10 AM 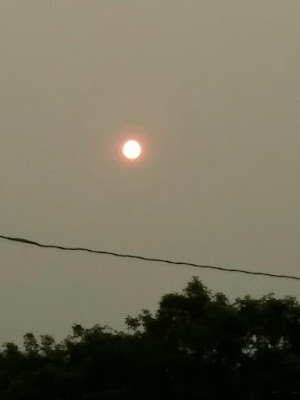 Our air here has been smog for the past week as the forest fires in thee American West heightened by HAARP drought amplification have left a sullen and macabre scene here. The sky looks dead and even our 100 degrees drops off by 10 degrees with all the GREENHOUSE GASES in the atmosphere.

I'm going to repeat this as you people just do not get what this blog has been educating you. If you are outside, is it cooler in the shade under a cloud or under the sun? Of course it is the cloud.

What are clouds made of? GREENHOUSE GASES DUH.

So these massive fires in the West burning are Bill Gates climate cooling. 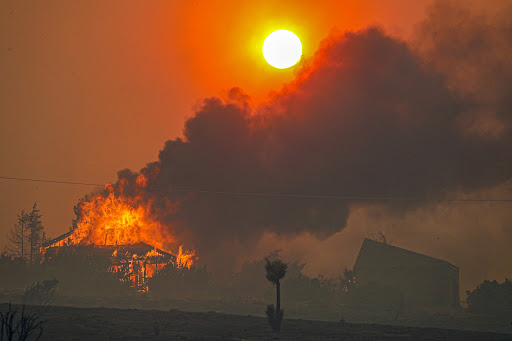 Today our skies were pink. I'm trying to get uploaded a photo I took, but news to me my Tracfone expired a month early as I thought it was August. So that is why no pictures were sending.

Our sun was red, our sky at this moment is a pink grey. In fact, visibility is about 400 yards and it is decreasing. There are no forests around here for over 1000 miles and yet we have a pleasant aroma in the air of wood smoke. I will confess I like Canadian forest fires as their smoke always is light and BBQ like. This year though I have never seen this kind of smoke as it is like some primordial ooze in one would think we were in the Bitteroot or Rockies and the blazes were just a few miles away. This is immensely thick smoke.

This is all the 1% again. You remember in 2009 that Obama Greens decided to HAARP fill the mountains with snow, and then WILD the rivers, meaning Obama flooded out all the GOP Missouri and Mississsippi River basin. This is the same chit in amplifying natural drought and you never hear of people fighting fires anymore, which I agree with, but this kind of burning is going to cool things off. Do not be surprised if you see frost in some the east coast when HAARP drops Arctic chill out of Ontario this weekend.

I guess this is good preparation for me in the last days. The moon blood and sun ash is not far away in the vista I'm stuck with. Only part I really do not like is if I had to suffer in this shit, I should at least have elk, moose and bear to shoot, and piles of pike to enjoy. Instead as usual all I get is the exhale from that Goddamn fag red Justin Trudeau in this eerie atmosphere.

Am checking to see if it might rain. That should wash the muck out of the atmosphere and it looks like some showers are coming.

For the best quality of a synchronization I had to mount this video from few different sources. I think my version is better than the ...