To Burn or not to Burn that is the Question 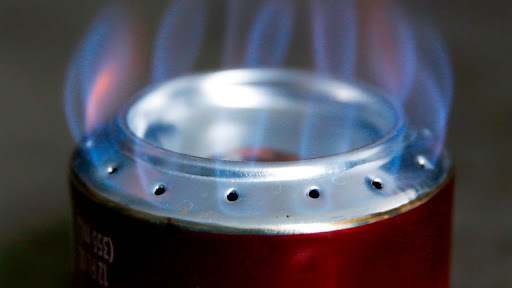 I sometimes forget that people do not know things. I was listening to Canadian common sense survivalist Stefan Verstappen on Rense and he mentioned something which Jeff Rense was surprised by, including the fuel which was used.

I perhaps have written of this long ago in a pop can alcohol stove, but will visit it again so you have some kind of understanding to this.  People sell them for 14 bucks, but you can turn these out for nothing out of pop cans.

There are different kinds of these burners. The one I use is like the above. Others are open in the middle. You can see the on Gaytube how to build the different kinds, but I will give you some pointers and what my experience is.

The reason I do not use the open can, is you have to do too much cutting in the top out and a the side panel out of the original can.

The one above, you just cut a top and a bottom and slide them together. There is a million dollar idea in this though, that you must use a paper punch to make round holes on the sides where you cut, because if you do not, the can will crimp at the cuts and slice the can you are sliding into wide open. It took be a bit to figure out why the holes were in the can an this is why.

To drill the burner holes, I sued a big ass sewing needle clamped into a vice grip. You have to be careful as needles are hard steel and brittle. A brad may work but that is how I bore my hole as drilling with a little bit is going to snap them sooner or later and you do not want big ass holes.

I do seal mine with JB Weld. Yes is messy but that is what I do.

To fill this, you need a hole in the middle. The oldsters used a penny on top to seal it when the burners is running. Me, you can get a pop rivet tool that has nuts so you can put a little stove bolt in it to make it pretty.

Before Gaytube all this was on a fantastic site called Wings on one of the free platforms. A really nice guy ran it and he had lots of cooking stoves you could make.

This one runs ONLY on alcohol. DO NOT EVER PUT GAS in this thing or it will blow up like a bomb. Alcohol though burns blue and clean. Maybe if someone pays a six figure donation I will reveal how to supercharge this stove safely, as I do have a way to turn this 2 inch flame into a 6 inch flame without burning more fuel. As I said that is only coming with a big donation.

For a stand just use 1 by 1 inch wire to form a hoop to set things on for cooking.

Now why you do not waste time on building an open version of these is before hot lunches, plumbers in the last century came up with the plumbers stove. This is not as high heat as the one above, but it will cook things and it is easy to make. 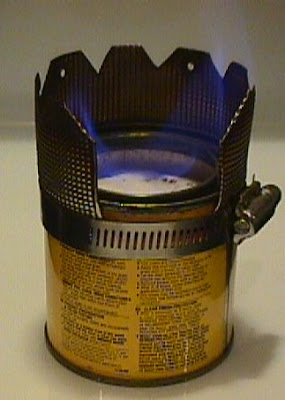 You just stuff a little clean seal-able can with cotton
balls and fill it with alcohol, and yes the stuff in hardware stores works, just like about anything from vodka to HEET. Just open the top, light it and put your whatever on it to warm up or cook. To turn it off you just put the lid on. Just remember that alcohol burns hot and clear, sometimes if you don't see fire, it is still there burning.

Some of you wise people will say, what about if there is no booze to burn?

The answer is the Hobo Stove. 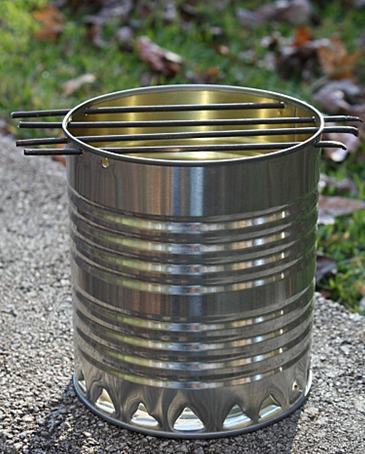 The original was just a metal bucket but they are hard to come by. You can do a pretty good job with a coffee can and using a can opener to cut the vents, put in a wire so the wood can get air to burn, and you can do some hot cooking.

There are torch stoves with elbows and out of cinder blocks, but this is about something portable. It helps a great deal to have a hole on the side to stuff in sticks, corn cobs, paper whatever. I like the wood burners as you can fry things on them as they will produce high flash heat, and ashes in your food.

If I had a perfect junk yard world, I would have a stove pipe or stainless steel pipe, or big ass copper pipe as my burner, as these cans will rust out pretty quick. I would like something more permanent.

Just remember you need fire to use these things to ignite them. There are nifty pressure igniters you can use, but matches are a necessity for all you rich people, and just remember those lighters you trust in, stop working when it gets really cold. They need warm weather or to be by your skin to stay working.

In writing this, I realize how long I have been practicing survival and knowing how to start fires and cook on them. Last winter we worked out the barrel stove and were grilling meat and foil frying potatoes on the coals in perfecting that mystery too.

I have tried solar cookers and they work only if you live in warm sunny locations. I do not have the resources to build one yet to write about it, but I believe I could with solar panels, build a coil type burner / oven,  with  two chunks of cast iron water pipe and some kind of perlite and concrete mix between the pipes for retaining heat and reduce the burn factor. Listen I just touched my elbow for a fraction of a second to a tractor muffler and it burned me deep when I thought it had not left a mark.

Ok those are the stoves. If I had my druthers I would build this cast iron thing, a sort of elbow stove, for the yard, that I could cook on if I needed it long term. Then again if I was a rich ass with a big portfolio I would get at least 300 gallons of ethanol and cook with that. Then I would make it an art-form in a four burner stove, with a five gallon gravity feed, with my super burners. Do lots of shit when you have money, but people with lots of money sit on it and let tools of the 1% use to enslave the world.

Well time to watch anime about transhumans out of Japan.

You know everyone should have their own Japanese girl with green eyes.