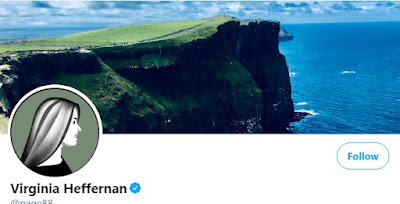 The Lame Cherry exists in a world of satire here, as satire is really a French thing, in factual observations meant to by ridicule change the misbehavior of those in power, so they become aware that advocating starving people to eat cake is not acceptable.

In surfing the net for things to cover and things to fill in the blanks, I came across a link about Eric Clapton. I have covered Mr. Clapton in I was never pleased with his bad behavior as numbers of rockers are disgusting in the lack of quality control. Mr. Clapton plays the guitar well, but he is not a really a guitarist. His best feature is he writes better songs than the Beatles in being a bit more complex.

Some though, in this scheduled hatred of the targeted group of Caucasians have unleashed hatred against Eric Clapton which was scorched earth, a mania which only manifests in people in their own emotional hurts, which makes no sense to others who watch this car crash in print.

It was an opinion in the CIA's Mockingbird pages of the LA Times in which a Virginian Heffernan unleashed and considering the things I caustically say, this even made me wince. I will post the complete flaming verbiage below for you to decide, but apparently Ms. Heffernan has been making a living mocking Donald Trump and his supporters for a few years. she actually was posting about being furious in noting something like they were trying to pass off as Good Nazi's.

I was curious as to what this person looked like in all of this venom, and as her Twitter was the top picture of a young anime woman who was pretty, and looking off the seascape with the forensic psychology of what all that means, I found her Wiki picture which is below. 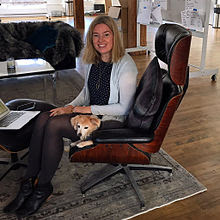 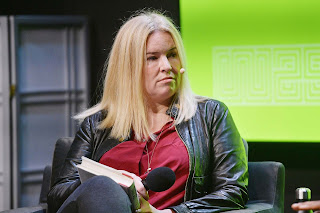 I honestly feel sorry for this woman. She has been handed a great deal of money and power due to White America removing White males, so other peoples could get into colleges and into jobs. I have always wondered what the job hire is like, in how do you interview for, "Yes we want someone on a podcast to hate Donald Trump", so do you put that on your resume that you hate Trump, do you scream about what an asshole Trump is to your interviewer, so just how do you get the job, in the person hiring you to hate Trump, knows that you are not going to be offering your pussy to be grabbed on their dime by Don jr.

What is the psychosis in this of the fear porn is the rage against Eric Clapton as another anti vaxer. What is illogical about this is, Dr. Fauci says you are protected if you got the vax. It is the people who are not vaxed who are supposedly taking the risk. The vaxed can live their lives until their next vax and are safe. So Eric Clapton who had a severe reaction to the vax, and has been politically resisting the lockdowns which have been proven do not work, is now vile, because he has stated as is his right that he will not perform in venues that require proof of being vaxed. This set off Ms. Heffernan in accusing Eric Clapton of hosting super spreader events. Again, Governor Kristi Noem of South Dakota had the Sturgis Biker Rally in 2020 AD in the year of our Lord and there was not a super spreader event. No more than the Texas democrats fleeing Texas for DC and only a few of them tested positive with a COVID test that is as unreliable as a person's love.

Ms. Heffernan's article would have been more interesting instead of wincing if she had just written what is bothering her in Eric Clapton is not advocating her rights to being locked down, vaxed, listening to his concert on podcast or staying home and being fat, should be infringed.

Thus all that comes out like in all liberal positions is the hate wrapped up in dishonesty in why the hate is being vented at Eric Clapton, instead of what is inside the person which they really hate.

Sometimes as a woman, I would have liked to have taken a White man's job, gotten paid the big salary and offered great things if I just signed on and hated things which I was hired to hate. It would have made for an economic life, but I see too many people who have it all, just sour on everything and they can find nothing to ease the disappointment or fill in the empty places.

So my portfolio is Jesus the Christ in He accepts me as I try to do better every day and my gold has been I do not have to answer to people who want me to play a roll to manipulate the masses who want to be validated by the hate.

We all have about 70 years to get things worked out. I hope Ms. Heffernan gets things worked out, as if the electric stays on, she is not going to like in a few years reading the things she wrote which came flowing out of her.

She should have looked at her dog, as he dog looked as sad and scared as she was. It was a sure sign.

The music people adore when they’re young often crystallizes their identities and unlocks oceanic feelings. It’s easy to latch onto certain songs, become defensive about their brilliance and refuse to let go.

Clapton, who is 76, has been in the news this week — not for rock-goddery but his reckless anti-vax rhetoric. His dangerous stance on vaccines has forced yet another conversation about the importance of “separating the music from the man.”

Fans have started to argue again that Clapton was such a Michelangelo in music with songs such as “Layla,” “Cocaine” and “Wonderful Tonight” that his grave misconduct can never make them question his work.

Some seem further to have internalized the creed that “Clapton is God” — apparently without knowing that Clapton himself has suggested that the meme, which was spray-painted all over London in the mid-1960s, was invented by a Yardbirds promoter.

For these believers in Clapton’s divinity, you can criticize the man — and there is more than anti-vax politics to object to — but hands off the music.

This misses the point. In Clapton’s case, the music and the man are one and the same — arrogant performances of “iconoclasm” that appeal chiefly to young, self-doubting minds eager for outlaw heroes. The Clapton package hit the spot at a certain hormonal stage of life. But then you grow out of it, especially as both the music and persona curdle.

Throughout the pandemic, Clapton has joined in criticism of the COVID-19 lockdown, as if governments were just 1960s priggish parents grounding kids for smoking grass.

He played on an anti-lockdown track by fellow science-denier Van Morrison. Then he started citing nutjobs and YouTube videos as evidence of conspiracies around the pandemic.

But Clapton also chose to get vaccinated. (It’s almost as if he didn’t want to contract a deadly disease.)

After his second shot, he alleged that the vaccine left him with a 10-day flare-up of pain in his hands and feet, possibly —he implied — related to the peripheral neuropathy he suffers from. Neuropathy is the result of an injury to the nerves. It can be caused by alcoholism. Clapton has long admitted his alcoholic history.

On Wednesday, Clapton announced that he won’t play in venues that require audiences to show proof of vaccination. Clearly old Slowhand is willing to create superspreader events, secure in the knowledge the coronavirus is unlikely to infect him.

Here we go. Vaccinated celebrity-types discouraging vaccination for the masses. Worse: making vaccine hesitancy seem heroic, a revolt against tyranny. For art. And just as the Delta variant delivers death around the world.

Nostalgia keeps Clapton the guitar hero from being dismissed as a public health hazard. He should have been pulled off his pedestal long ago.

Nearly from the start, Clapton revealed himself as racist, violent and now anti-science, and you can’t separate that from the “Clapton is God” package.

This is not to say that everyone who likes Clapton’s music shares his views. It’s to say that Clapton the delirious soloist has always been striking the same chords as Clapton the anti-vax preacher.

There are decades of vileness that have been overlooked or rationalized.

There was that time in 1968 that Clapton damned Jimi Hendrix in Rolling Stone, using a casual racist slur and citing vulgar racist nonsense as the source of Hendrix’s appeal as a sexual fetish object.

There was the time in 1976 that Clapton announced at a concert, again with racist slurs, that he wanted to “keep Britain white” and to deport all Black people.

And of course there’s the time in 1999 when Clapton told the London Sunday Times that fueled by drugs and alcohol he abused the model and photographer Pattie Boyd in the 1980s, when they were married. “I took sex with my wife by force and thought that was my entitlement,” he said.

Now Clapton, with his dangerous vaccine ideology, seems to be taking a life-or-death public health matter by force, and thinking it’s his entitlement.

In the Guardian in 2018, critic Neil Spencer praised Clapton’s music as “dazzling” and full of “caustic brilliance,” cautioning against putting too much stock in his “poor behaviour and assorted addictions.”

“One must trust the art, not the artist,” Spencer wrote.

Dazzling and brilliant are generic words of praise, and clearly in the ears of the beholder. But “caustic” means corrosive. If Clapton’s music is corrosive, certainly so are his actions and ideologies. They’re all of a piece.

With Clapton, it seems time to trust both the art and the artist — and both seem to be begging (on their knees) to enter retirement.