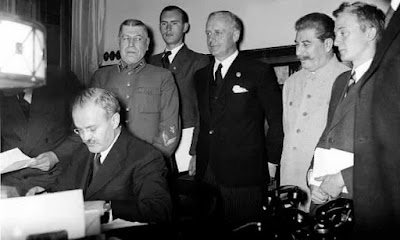 Of course you know nothing of this, so the question is should I educate you on the historical background or instead dump you into these waters and make you sputter and spit and swim in figuring out what is being rammed into your minds. It will be the latter, as you are so mindfuckt that you need something to jolt your processes with something Lame Cherry.

The problem of World War II's order of battle was the ineptness of liberal socialists in American Frank Roosevelt and Anglo Neville Chamberlain in their disarming and peace proposals.

The problem with World War II's order of battle is Italy's El Duce was Roman slow in a modern age and der Fuehrer Adolf Hitler was intent in forming his projections of power not in the mistakes of the Kaiser in World War I.

Adolf Hitler was brilliant in dealing with the British and French. The Anglo's intended this war for Russians to bleed for it and Americans to burn the power.

As France and England attempted to play the Soviets as fodder for German guns again, thee Americans were cowering as Frank Roosevelt had entered the world state lecturing at Adolf Hitler, and Hitler bitch slapped this ignorant manipulator in humiliation. For that Frank Roosevelt would fire bomb innocent Germans, allow Soviets to gang rape a million German girls and women, and mass murder 11 million Germans in American led concentration camps in conquerred Germany.

In examining the Soviet Molotov speaking for Stalin and Nazi Ribbentrop for Hitler, their mutual pact of Poland was shortsighted on Moscow's and Berlin's agenda.

This is the conversation which should have taken place between Ribbentrop and Molotov.

Nazi - Europe is a muddled mess. All the warm water ports are British Baltic and Mediterranean blockaded by the Royal Navy. A port is not a port if a British warship is sitting there.

Nazi - Settling the Polish question, Russia should have peace in Europe, as Germany will smash the Poles. Our western wall will hold the French until our 100 divisions smash west and crush the French in their lands and shatter the British with humiliation, for without an eastern front of Russians bleeding for the capitalists, they are nothing.

Nazi -   With the Reich smashing England and France in the west, their seized lands in Syria, Mideast, the Khyber and India will all be undefended. The Japanese who are your contender will soon be occupying the British, French and Americans in the east. America will be busy with the Japanese and Germany will occupy Europe to England before America could react.

The Soviet Union will liberate the Mideast peoples and India, and as custodians acquire all those warm water ports and access to the world oceans from Ceylon to Palestine.Germany as victor over the British Empire, accepts Australia and Canada, and supports Russia's annexing their Alyeska which thee Americans purchased.
Japan will secure Soviet east flank, Italy will in North Africa secure Soviet underbelly and Germany will secure Soviet west in North America.

The Soviet armies will smash south and Alaska east, instead of coming west in the clutter of Europe. Japan will be weighted down in China for a generation as Russia becomes the continent of Asia, liberating peoples now in colonial bondage, as German Europe trades for Soviet oil and raw resources as the Axis shuts the gate on thee American fortress in we have the key.

Adolf Hitler with Joe Stalin should have embarked upon this diplomacy. Der Fuehrer should have outreached to the Germans of North America, seeking to liberate them from Frank Roosevelt's proven socialist police state which has overthrown that People for erasure.

Can anyone say after all the dead of America and Europe for the erasure of Caucasian Protestants in America, that the map below would have not been the correct diplomatic future of the world considering what the present is being unleashed on Americans. 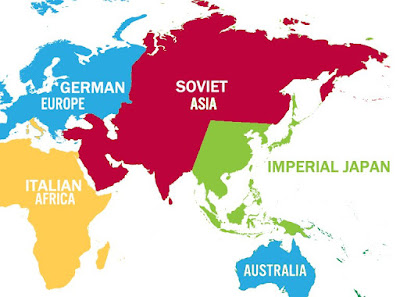