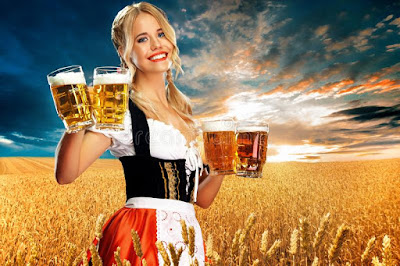 So it was hotter than a bitch the other day, so I decided to pick up a six pack of beer on the drive home as drinking and driving is frowned upon, but we were stopping by the cemetery so what is more of a frown than that.

I like cheap beer. I like other people buying beer, but they always buy cheap beer, so you get it either way, and the cheapest was a glass bottle six pack of Pabst Blue Ribbon. America has had phases of beer. You had that shit out of Wisconsin and Minnesota in Schlitz, Hamms, Pfieffers, Grain Belt, Old Milwaukee............damn that Old Mill was shit, and that is what the asshole bro in law drank, along with Pfieffers, because it was cheap while he drank Miller Draft in a bottle.

Hamms was not so bad or Schlitz, the bad being some of them German beers had so much hops in it, it was always bitter. I always thought Blue was not so bad, until I drank that sour shit on the way home. Even cold it made my gut sour. Is what I'm nursing now in writing this, fridge that is not plugged in cool beer.

Grandpa always had basement cool, which was instead 100 degree in the porch foam in your mouth beer. I never really did like beer as it gave me a gut ache.

After those phases of beer were gone through, there was the Miller phase, beyond Lawrence Welk, and then the Coors phase. Coors beer is not that bad. Used to drink that if I could get it. Otherwise it was what was on tap at 1 dollar a cowboy, which in the brier is 3 huge olives in a tall glass of like 3 beers and man you can get hammered on them and not want to repeat it.

I never did like beer drinkers that drank Budweiser as it was white collar pussy beer. Thing is wicked one and TL drank the stuff, so that is what we were buying and I do not pay attention to beer as somedays it tastes ok and somedays it tastes like shit to me.

I usually drink red beer, which is tomatoe juice in the beer, as it cuts the hops taste. TL does not like it, but it covers up the sins of German brewers.

That is when I learned how pussy mild Bud is. No wonder people drink that shit, in it is like water. Blue you frown at in how bitter it is, but Bud you just drink it down as it is just barley fermented malt and zero hops. Figure that is what would come out of St. Louis and pricks would drink it, as they eat Angus beef with no flavor and like anything that tastes like air.

Anway, I drink about any beer. Drink it more readily with tomatoe juice and the fact is I do not drink beer that much. It is best as a medicinal like if you fried your brains out in 100 degree heat, and you feel sick so you can't eat in drinking too much water, a beer about 9 pm with snacks does something to establish your balance again. Otherwise my beer drinking is TL and I sharing one. That is what I look forward to, just sipping a beer with TL and that is my treat.

That is about it on beer, as the internet is not working and more to the point, the pizza and bread sticks are done, and the beer is gone as I hate beer with food. Nothing much worse in life than drinking sour hop beer with a meal.