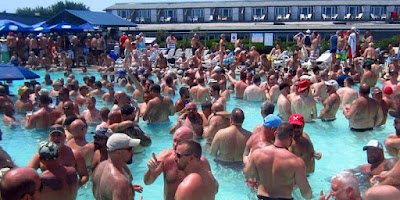 There is good news in the contemplated Biden mask mandate, in where it originated and why, because in this live rat experiment which the CDC and Ghoul Fauci are basing their lockdown on, we can glean reams of important medical data.

What we know is that this was primarily white males. Fat white males. They were in a pool, so their ass feces was in the pool, as was their semen feces and urine. They were covered with it, and ingesting it. This would have in the L Strain wiped out numerous fags as that virus existed in feces. As fags shove erections up anuses if this killer strain was present, it would have manifested and spread. I has not.

We know that the shedders in this group were not shedding. So either the shedding has past or these rich white fags got a serum which was designed to make them immortal fags and not immortal zombies.

What this means is the "variants" are as this blog stated would be the projection, all hype. The 1% has not released an new Obama Wuhan bioweapon as it would not be contained. Therefore it is a propaganda virus in this non lethal headache and runny nose thing. Some of the fags were hospitalized, but none were terminal.

A study of this outbreak, along with a withdrawn Indian study that is not publicly available were the two pieces of evidence the CDC cited to back up its recommendation that masks be again worn, including by the injected population. (And as we know CDC “recommendations” quickly become mandates at the local and state level, at least in Democrat-ruled areas.)

What the CDC did not mention was that Provincetown outbreak coincided with something called the “Bear Week“:

In fact there is zero information as to why the people were hospitalized. It could be the fat old man had heart attacks humping each other on viagra cocktails or they were five who had things shoved up their asses and could not get the objects extracted as is the case in homosexual perversion.

The five hospitalized will be fine, treating people is what we have hospitals for. When did someone falling ill and recovering become a tragedy?? (That is if they were even hospitalized with COVID, and not admitted for something else and then discovered to be positive in routine testing.)

What we know from this is positive. The variant is not a super spreader and it is not deadly to fat white people. It is not in feces or semen. That gives ReVaxNiks breathing room to analyze the data and decide upon which provisions they are going to engage in, in dealing with this.