African Americans Not Liking Being Vaxicided 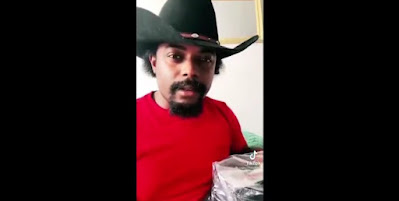 From the time that Africans were dumped off the boat, being sold by Obama's Luo tribe to slave traders, the Negroid has been the tool of the elite in threatening the White Americans with riot in the colony days to Lincoln turning them loose on Southerners.

That is why in this 21st century America of Obama, that George Soros funded ANTIFA communists to goad Warren Buffett's Black Lives Matter to burn down Black communities and loot them, as Whites were billed the problem again, the reality is Blacks were exposed to this Wuhan plague and they got sick and died.

Now the Blacks are not taking the vax in fewer numbers that on the leash Whites, but in this video below you have Blacks recording the  death of one of their own in the metro. The guy recording this, states the guy took the second vax, got pneumonia and the guy is laying there dead on the floor.

The EMT's toss the guy out, and are lecturing him that the vax did not kill this guy, which was more important to the officials than the facts.

Another Vax Death - Man Livestreams Moment
His Friend Is Found Dead, One Week After Taking
The Second Shot - No Joke - No Mandates!

The Black journalist is upset of course, and he adds this video of the Black cowboy with a gun, saying he is not going to flee, but it going to kill anyone who tries to force a vax on them.

Considering the the Blacks have been funded and taught to hate Whites since Obama's installation in 2008 AD in the year of our Lord, and Buffett and Soros are funding all this, as Donald Trump did nothing to stop the Wall Street drug trade which is slaughtering Blacks in Chicago, there is a reality that these "domestic terrorists" according to Attorney General Merrick Garland are posting things online, they are staying up, meant to move other Blacks to resist and this is the perfect situation for violence.

We have seen the George Stephanopoulos brain trust on ABC saying that people should not get government programs, including Veterans if they do not get vaxed, or more to the point, VAX RAPED, as when someone sticks something in your body without your permission, that is rape.

Blacks should be treated better than this, but they are being scapegoated again as the Scary Nig, who are once again in the plantation corner, backed there by laws, which state they have no rights to their own person, but the government says if they get treatment or benefits, but only if they put the vax chain enslaving them on.

It is not right and it needs to be stated it is not right. Where are the leaders of the Black community, and that includes image Obama, who should be standing up for the rights of Blacks, but are instead making profits off of these injections and more genocide of the 99% by the 1%.

Blacks should not be made criminals, as millions of them are jailed profiting this slave system, which funds Wall Street and they all get Anthony Fauci rich, while Black Americans get branded as domestic terrorists for demanding the rights of their own person.

Is Massive Starvation And Population
Reduction Their Next Move?

Most Americans Have No Idea How Close
They Are To Poverty, Starvation And Death