So like maybe I'm not like you, but I do not like eating out of silverware that has been touched with shit fingers. I find it repulsive to the gag reflex so I for various Coronavirus and Cholera reasons abstain fro eating feces forks.

So I decided as we work over at the wicked one's place and it still creeps me out in the feces that was there, that we needed to get some silverware. Thing is two years ago I could not buy a fork as they had none. This year, they have a tray of them, but I'n picky about my silverware as I dislike heavy shit, pointy stuff, ugly stuff and frail stuff. It is like silverware should be nice, not artsy, not plain, not the stuff that people I hate would eat out of, as you know people you hate do not have appropriate silverware.

So I'm rummaging through the forks and I can not find any star forks, but I find this cute baby fork. Of course there is no match, but baby forks are like pack forks in you can carry them and do not complain about little forks when all you have is your dirty hands or a stick with splinters. Lighter is better so that is the code of the trail. Also a fork should be big enough to castrate a rapist or kill a bear.

So I'm digging through and come across these salad forks., The kind people I do not want to be around, but do no hate would eat of out. This virus has messed up my vision some so I could not see, what this one fork which made the final cut had on it. It came down to 4. I tossed back two after expert examination and came home with this one of the two.

I showed it to TL and TL said that is an airline fork. As I have no experience in commercial flight it sounded legit as this was s small fork but it was heavy, like you could kill a highjacker with it, or jam it into a door that blew open to hold it shut.

Got to looking at it and searched and NWA stood for Northwest Airlines, big Minnesota outfit until Delta took it over and went woke. 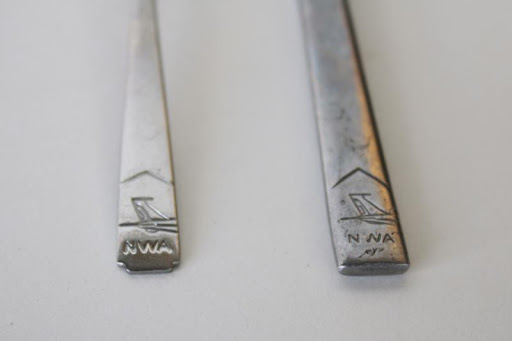 So I asked TL about the silverware and TL said, "It is all plastic": so I knew I had old silverware and knew that someone stole this as while I found sets online, probably stolen by stewardesses having chicken and salad affairs with pilots in out of the way locations that NWA flew to, which again I have no idea, of as were does one fly to out of Minnesota? Like did they just fly to the Soviet Union and Chicom China and Havana Cuba, or did they go to normal places?

I really do not know and judging from the stewardesses, they were hurting on the looks. Santa in Iran did not even like them. The one is ok, good blow job potential, the one looks like a retard and the last one looks like woke, like a transvestite with testicles, like she weighted the plane down so they had to load an extra ton of fuel for them 707's.,

Anyway, I thought about writing NWA, but it does not exist. But then with plastic forks they would not want a stolen metal one. At 40 cents, I doubt they would pay the ransom and shipping would be more than the fork. Then again, what would woke Delta want with a stolen NWA fork. Maybe that is why NWA went bankrupt in people were stealing all the silverware. One never knows in these things as high taxes in Minnesota, other stupid things in Minnesota and you got ruined pro teams, ruined lives and ruined businesses with ugly women and gender guys without work.

So I had to buy a stolen fork. That sucks, but at least I'm not going to hell for stealing a fork from NWA. That would really suck in you line up to Jesus, after paying money to go to Heaven like to charities that use it for whores in Nevada and give it to worthless relatives who spend it on spring break in Miami, cheat the IRS and get away with it, buy some politicians and Jesus says, "No entry as you stole that fork from Northwest Airlines".
Of course you would blurt out, "But what about asking satan for big tits? What about that cock I sucked which was not my husbands or was attached to that tranny whore (Obama type) and cheating Lame Cherry out of donations?", and Jesus says, "I stopped reading when I got to the part you stole that fork from Northwestern Airlines back in 1962."

Wow going to hell for something like that. It is a good fork and all, and was probably a souvenir for someone who flew to some exotic location like Fargo North Dakota and wanted to commemorate it by stealing an airline to the ground, but you probably should have grabbed an uggo stewardesses ass or given her 20 bucks for her panties, and that may have went over better with Jesus to the point He would have continued reading to your other major sins.

I will be eating Primavera or things like that with my stolen fork with NWA on it. I would that person had gone whole hog and stolen two, as it is like, if you are stealing one to hell, why not take two as it is not like you get double hell or something, but then what would a person going to hell need with two stolen forks. It's not like you would save it for your wedding cake and say, "Honey, wait, let's eat our cake with these stolen forks from Northwest Airlines so we can share something special together as I doubt sex will be as good as they say, as things people say, is never as good as they say".

Anyway, that is what I got for 40 cents. I think it was like 20 cents of fork, but I will enjoy eating with it, and probably think of roaring engines and I don't know what else is appealing about airlines, but I will enjoy it as it just looks like a fork I would enjoy now that I know the history of it.

Say maybe I should remote sense it. That would be interesting doing a flashback to when the world was only partially insane. I just might have to do that.