Is Kamala Harris Blinking Morse Code To Be Rescued? 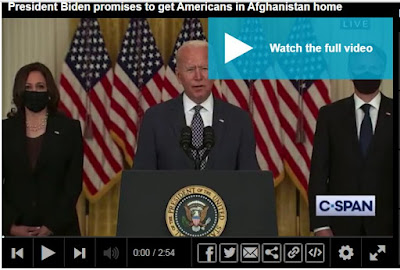 In another Pedo Joe Biden (My wife Jill ate my homework failure) bizarre appearance, the Pedo now flanked by two Blacks lied to the world that the world is backing his failed Afnamistan policy and lied to the 40,000 Americans in Afnamistan that he would get them home, if they want to come home.

What caught my attention in this Daily Mail article was it looks like Kamala Harris is blinking out some Morse Code message, like hostages did in Tehran or something. Biden in an obvious "Blame the Black" lined up his two Afroidicans at the back seat of the Biden bus and then lectured the world what a great leader he was.

As stated, the problem is Kamala Harris is blinking away some kind of message, probably to BLM begging them to rescue her as Pedo Joe is holding her hostage in the White House.

I have to clarify something in this report in, it was not two Black guys behind Biden. It was gender Kamala and the run tab was covering one of the wokester rainbow fag whites in this regime, who had a black mask on. I thought it was Lloyd Austin the failed Sec.Def, but he is of course AWOL or perhaps is still hunting down White people and purging them from the military and or climate change.

It is obvious that Kamala Harris is not pleased to  be there after Pedo Joe tried to hang this on her, like the border, like the vax and is now shuffling her off to Vietman and Singapore to assure them that if when China invades them, they can all fly to America too and be communists here and terrorize what is left of Americans who are not being hunted down by Lloyd Austin or Chris Wray at the FBI.

The Lame Cherry does request that someone in the Army command at least fly a Blackhawk, if we did not leave them all in Afghanistan for terrorists to fly around in, to light on the White House roof and tell Kamala Harris they are there to rescue her if she is a hostage and then fly her to.........I don't know where as she is a Birther already and in the United States.........maybe back to where she came from in Canada, India or the West Indies. India is as hot as Kamala is, so I don't think she would like that, and Canada was too cool for that quadroon that Harry wed, so maybe Kamala can be resettled to like some US property there as isn't there like the US Virgin Islands there.........let's rename them in her honor in the US Kamala Islands where she could be lovely and liberated from being held hostage by Joe Biden.

Look Kamala deserves all our support. She does not have sex with little boys like Mike Pence and she does not molest children like Pedo Joe Biden. For being a flat backer who protected Pedo Priests for cash she is the most moral Vice President America has had since.........damn, Dick Cheney lined his pockets, Daddy Bush tried to knock off Reagan............Al Gore was taking bribes, Fritz Mondale was a Minnesotan and you just know he was up to someting, Gerald Ford covered up who croaked Kennedy, JFK helped croak Kennedy, Spiro Agnew was cashing in..........you know the last honest Vice President America had was Richard Nixon and he told us so in that Checkers Speech about his little dog as that Dick Nixon was tricky, but he was so honest that they had to frame him at Watergate.

Anyway, doesn't the FBI have a hostage rescue team? Not the one that started the firefight to get LaVoy Finnicum killed, but some kind of ..........no they burned up the Branch Davidians, shot that mother's head off at Ruby Ridge...........maybe we could just have a pizza ordered in from Pizza Hut and when Kamala answers the door, have a note on top, which says,

Kamala if you are a hostage of Joe Biden use this pizza as body armor and run for your life for the gate on Penn Avenue, as I have a delivery at the airport and you can fly to freedom, if you can afford the ticket.