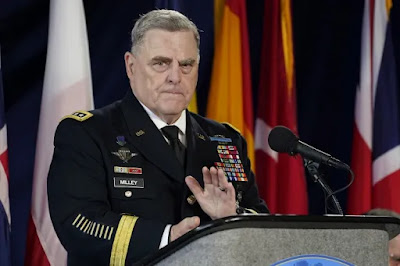 General Milley and the Scale of Humiliation

In the Lame Cherry assessment on Afghanistan and projections, has been published here, in this is either going to kill China in being lured there, kill America in cutting off oil control or foment a war by the 1% which will kill both China and America.

That stated, the following requires to be stated. The United States in whatever form it is, has been betrayed in one of the worst dereliction of duties in American history over the failure of Afghanistan. This is not about the defense conglomerates extorting trillions from America for profits as Americans protected the heroin trade, and has now as Dick Allgire mentioned, no longer necessary with synthetic heroin replacing the natural product. This is about failure to do a job, and this begins at military Chief of Staff Mark Milley, Secretary of Defense Lloyd Austin and CENTCOM commander, General Kenneth MacKenzie jr.

Former Secretary of Defense Leon Panetta assessed the situation correctly in this was failure of American intelligence and military. Failure on this scale must be punished by Court Martial and firing. Literally the loss of Afghanistan has placed the Khyber choke point into Muslim terror hands. The Khyber is now in control of nuclear Pakistan and nuclear China. All of the Mideast is now open to a land invasion and India has been placed in jeopardy, nuclear India, which means the loss of Afghanistan has become a prelude to nuclear war. This is serious and there must be consequences in those who oversaw this catastrophe not be entrusted further as their entire decision making process if worthless.

PANETTA: Well, there's no question that the situation is deteriorating rapidly. We now have 11 provincial capitals that have been captured. They're 80 miles from Kabul. We're now looking at intelligence estimates that Afghanistan could fall within the next 60 to 90 days. And troops are headed to the airport there to try to help provide security in the evacuation. So there's no question that the situation there has gone from bad to worse. And it's obvious that whether it's intelligence or whether it's military officials or whether it's the people in Afghanistan themselves, that everybody has misjudged this situation terribly.

General Milley and the Scale of Humiliation  ∞ rcp

The United States under Resident Joe Biden, has embarked in the US military on two major transformations. The greatest threat to America according to SecDef Lloyd Austin are: 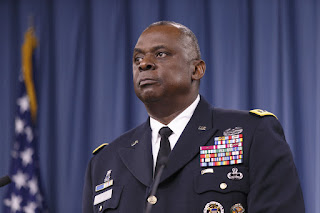 If one reviews the battle which overtook Afghanistan, the Taliban is not in the United States. The Taliban is not White American. The Taliban is not advocating policies to harm the climate. So therefore the assessment of Lloyd Austin and Mark Milley, for Resident Joe Biden, Vice Resident Kamala Harris and Birther Hussein Obama have been proven wrong. Climate and White People are not threatening the United States nor the Citizens. What overthrew Afghanistan was not White People or the Jan6ers the FBI is hunting down yet and arresting and keeping in torture captivity.

Those are the facts. The American policy of Climate Change and purging the military of White People produced the failure of Afghanistan, as the focus should have been as Barack Hussein Obama lectured the world and Joe Biden was there, IN AFGHANISTAN WAS THE WAR TO FIGHT.

Joe Biden. Lloyd Austin and Mark Milley all were informed by Birther Hussein that Afghanistan was the threat, and yet they in coming to power in 2021 AD in the year of our Lord, attacked Climate Change which is nothing that can be fought with bullets and purged White People from the military when ideology is not according to the Constitution is not a crime as long as it is not moving to overthrow America.

Pentagon chief Lloyd Austin 'tells briefing he is "beyond disappointed"

2 days ago ... Pentagon chief Lloyd Austin 'tells briefing he is "beyond disappointed" by Afghan army's surrender to Taliban ... US Secretary of Defense Lloyd ...

There are not any excuses in this concerning Afghanistan. Lloyd Austin was in command for years of CENTCOM, that is the military division which oversees the Mideast. There is not any excuse in this as General Norman Schwartzkopf, a democrat, was promoted to command of CENTCOM in Florida just before the first Iraq War with Saddam Hussein. Before this the Mideast was under the Pacific Command, which was not providing enough focus on this vital region. CENTCOM became a masterpiece under General Schwartzkopf in fighting three major wars there with success. His leadership assisted revamping the quartermaster supply chain so that services worked together and military items from tanks to bombs to bed pans were allotted numbers, so that shipping them to the war theater was organized and distribution knew what was in transit and what was arriving, departing or needed.

The Lame Cherry states that history as I invested in reading the General's book, so I know the history, know what a fine intelligence service the DIA has in CENTCOM, so there is not any excuse in this, that this was a failure or resources or US Soldiers. The failure of Afghanistan was deliberate and a profiteering whores trade. Those in charge now, have been in charge for over 30 combined years, Pedo Joe Biden was in Afghanistan in 2008 as a Senator. Lloyd Austin ran CENTCOM for years. Mark Milley has been in charge of the military from the Trump era and that includes Kenneth MacKenzie who was at the Joint Chiefs and strategic planning.

It does not matter that this Afghanistan handover to the Taliban to lure out China for a kill shot is the 1% policy. What matters is Americans were murdered on 9 11, were slaughtered for 20 years and it cost America 2.3 trillion dollars, and it is going to cost trillions more in oil prices rising, future war, dealing with Afghan refugees who will be terrorists murdering Americans again as Saddam's refugees were involved in OKC and more Americans are going to be slaughtered because losing Afghanistan means Joe Biden, Kamala Harris, Lloyd Austin, Mark Millie and Kenneth MacKenzie lost Asia, and the United States does not have the resources even with weapons of mass destruction to retake that beach head of over 3 billion people.

The above will not be fired or jailed, as no John Durham persons of interest ever will be, but it must be said, that they should be, because their woke policies have failed America and the world.

About Our AOR - US Army Central 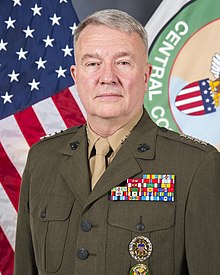