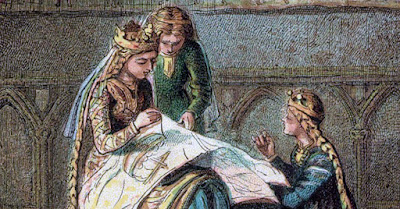 I have been pondering that Ephraim has been left out of the Bible and my contemplation of this disgrace on this offspring of Joseph, perhaps goes back to the date of 1066 AD in the year of our Lord when the Normans turned the English into the Cloth of the Land. Much sophistication appeared in England in forms of government and commerce which rose the island, but in every projection from this year, arose the advent to the greatest crimes against humanity.

This was all compounded with the inclusion of Jewish Shylock finance, as the British became a race of enslaved and exiled Welsh, Irish and Scot and even English. The strange part of these dregs is God utilized these very peoples as the foundations of the United States as White Slaves founded America in Irish and Scot, Canada, Australia and African colonies, and to a last corpse, the ruling elite have turned on these peoples after developing those Continents.

In World War I, the French were bled white, by that genocidal war with Germany which the Kaiser revealed was set up two decades before by London finance promising American fortunes in great European wars which did appear.

That is why the French were not inclined to start another war with Germany as they knew the slaughter, but it was the English ruling class, the Normans who drove the world to that slaughter, just as they destroyed the Russian Czars. If one looks at English Great Game India, all of the slaughter which has appeared in the world is all from London and from their Jewish bankers.

The reason this matters is the same history is repeating again. England has overthrown the government of the United States, Europe is a shambles as Brexit was designed, and Russia with China are on war footing, and who will bleed again, but the Americans leading other fodder races as the English have used up their people, killed off most of the Canadians and Australians as they were after all more of that cloth of Anglo, Irish and Scot, and not the Norman bloodlines with the Jewish Ashkenaz bankers.

The mirror of this from the American coasts, the ruling of Ottawa and Sydney parallels all of this history. There is a swindler 1% elite in all of these power centers, selling their people like the Jewish elders did the Ghetto Jew in 1940 to the slave labor market. It is why there is this White Genocide and erasure taking place on the planet. You think this is a "Caucasian" unity, but it is not. There are two definitive groups where all of this transpires from, and they are not dying or losing power, but instead others are dying and they are concentrating power.

In the United States, when the French, Indians and English were genociding the Americans in the Ohio, the coastal Normans couldn't have given a damn about those Americans. It has been the same ever since in an elite group shears the bleaters and the bleaters can't figure out why in hell Sydney is holding them down as criminals to be vaxed and Canadians are being erased for Chinese.

The evidence shows the Normans sold out for the 30 pieces of silver. They never were French so killing French was not a problem. They were not Saxon so killing Germans was not a problem. Hell the Welsh, Irish and Scots were just more cloth of the land to dispose of. It all goes back to 1066 and when Jews were given control of London finance based on Dutch fractal lending to incur massive debt to enslave free people.

It is this same clique, same caste. They have been interbreeding and slaughtering off God's Christian Protestant Peoples for a thousand years. It all started off with that Dane bastard line with the mongrels of Normandy.

Whatever the reason Ephraim is not included, the reality is this line has been a cancer upon humanity