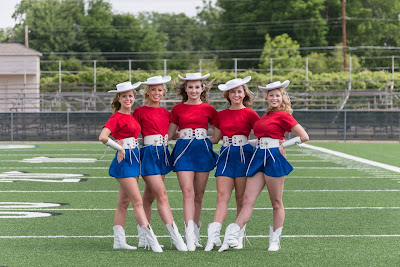 The Lame Cherry monitors Texas a bit more closely than other areas as Richard and Stephanie are in those parts and when this new wave of Mockingbird Propaganda was launched about Texas in COVID meltdown, I desired to investigate this and have concluded what is taking place there, and will be unleashed in other areas of America to fabricate this neo pandemic ruse.

One has to assemble the pieces which begin with Comrade Chang of Dallas Texas which is part of Mockingbird revealing that "pediatrics" are almost filled up as are other emergency hospital beds due to COVID.

Comrade Chang though makes a statement that does not make sense as it provides zero corresponding evidence of how many COVID cases there are now. All he does is say that unvaxed people are now the patients while the 1100 from January to July, were only 27 unvaxed, meaning that over 1000 COVID admissions were VAXED PEOPLE. That is a condemnation of the vax.

Dr. Joseph Chang, chief medical officer of Parkland Memorial Hospital, told senators that primarily unvaccinated people are showing up at the hospital. From mid-January to mid-July, he said, 1,100 COVID-19 patients were admitted and 27 of them were vaccinated.

What is not being revealed is the ethnicity of those in hospital. We do though have a map of Texas Covid which shows that it is the beaner sections which have one million Biden border busters since January 1st concentrated in the Mexican sections. This is your Chamber of Commerce and liberal enclaves in Texas making profits off of human traffick. 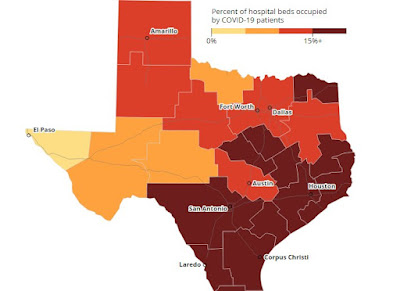 So the problem areas are evident and when this is added to the news revelations this week that Bidencon has been releasing infected foreigners into the Texas population spreading what is called Coronavirus, there is the perfect storm. Illegals who are infected, concentrate with other illegals and infect them. The next result is moving the Latin Pandemic into Texas deliberately to use Texas as a propaganda point in order to push........yes masks, yes vaxing children and yes the blame of this is the unvaxed who are spreading this, without mentioning it is unvaxed foreigners infecting Biden's border busters.

6 days ago ... The Texas border city of McAllen says more than 7000 COVID-positive migrants have been released into the city since February, and more than ...

There is a damnedable revelation in this, and it comes from a Texas doctor whose father in law died of COVID. First there is nothing in relation between the Coronavirus and COVID. You can not get Coronavirus from the COVID, the COVID is like HIV in AIDS, in it is a series of health conditions which are blamed on this virus. This happened with AIDS, and that is what this Texan revealed recently, in what was killing HIV queers in the 1980's and 1990's was none other than the drug treatment called REMDESIVIR.

If you read the propaganda, they reveal the presence of an anti viral. That anti viral which is being used has to be remdesivir, because it was that fraud Dr. Anthony Fauci who promoted that. I could not figure out what the purpose was because China tested this drug, and they rejected it as it did not work. Six weeks later the FDA was promoting this drug in America. Stay tuned on this as I will bring the punchline.

Doctors warn of shortages of an antiviral drug that shows promise for treating COVID-19 patients. And epidemiologists say the state’s hospitals may be in for a longer, harder ride than places like New York, where hospitals were stretched to capacity in the spring and some parked refrigerated trailers outside to store bodies of people who died from COVID-19.

That is what the Texas whisteblower found in the death of his father in law. This queer drug shuts down the kidneys and causes fluid to build up in the lungs which drown people. That is why people were put on ventilators for weeks to die from suffocation. They were being killed by remdesivir and what is happening in Texas? Bidencon is bringing in 1 million illegals. Bidencon is releasing infected border busters. In turn these test kits which prove nothing are testing positive for "COVID" which is not a disease, so the response is to start pumping people with remdesivir and they are ending up in intensive care from the treatment, which in turn pushes the propaganda that children are getting it and adults are getting COVID which is NOT the Coronavirus.

FDA Approves First Treatment for COVID-19 - US Food and Drug ...

Oct 22, 2020 ... FDA approved the antiviral drug Veklury (remdesivir) for adults and pediatric patients 12 years of age and older for the treatment of ...

Here is the kicker in this, in the liberals have been after Gov. Gimp of Texas since last March. They were already bitching about a Covid surge in May and blaming Abbot for it, when it was Biden and the illegals. This is a propaganda pandemic in the push is to blame the ReVaxNiks who are not these foreign vermin, all to advance what this is all about in Dr. Anthony Fauci Pedo Vaxing all the children in the United States.

The reality is if you give remdesivir to people, most of them will get COVID and it will kill numbers of them.

Cases of the new coronavirus have surged in Texas since Memorial Day weekend at the end of May, one month after Gov. Greg Abbott allowed a phased reopening of businesses. In June, Abbott scaled back parts of that plan, first pausing elective procedures in the state’s biggest cities in an attempt to conserve hospital capacity for COVID-19 patients, then ordering bars to close and capping restaurant occupancy at 50%.

So the projection is, this is a mad made political pandemic of not virus, but anti  viral drug.

The point is in this, if you are careful as with any flu season, avoiding shit finger contact in stores by wearing gloves. avoid the shedders who were vaxed, stay away from the damned invaders, do not ever allow them to start you on remdesivir, you will heal and be ok. That is not to say that all anti virals are bad, but this one harmed numbers of people and killed them. The AIDS Epidemic ceased when they stopped prescribing remdesivir.

Dr. Ben Carson just stated that these variants are not deadly and people will heal from them. What is coming out of Texas is more ghoul driven propaganda of doctors harming patients. There will be a push in this, as this blog informed all of you as the FDA is going to approve the Prion Vax and the Woke Conglomerates will push this to get hold outs and children vaxed. Texas at this point is the focus on breaking that state, which will be a tidal event.

So in review, Bidencon has brought in sick vermin. Bidencon has been releasing infected people into Texas. These infections are spreading a virus. People are tested and put on remdesivir which is making them critical and the unvaxed Americans who have not part in this are being scapegoated.

This is the same January 6th set up, People standing around like idiots and being designated as criminals.