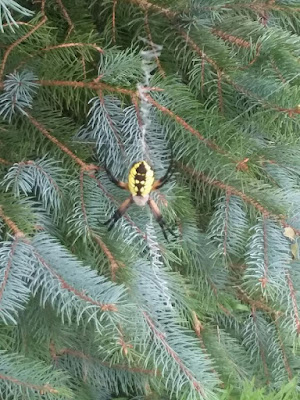 When it gets dry here, the corn spiders come. I do not know where they came from, as I once had a friend for a time in Ohio who knew what they were, as Ohio has lots of these spiders, but we never did. Our spiders were barn spiders, daddy long legs and those black spiders that build homes in web tunnels, but the last decades we have had more wolf spiders and granddaddy long legs in our homes, but these corn spiders appeared out of nowhere.

Yes we had exotics that appeared on our native plants. Have seen white, yellow and brown spiders, but they seem to have disappeared now too, but the corn spiders like on Predator always come when it is dry.

They are marvelous creatures really in they prey on locusts here. They eat piles of them, and in that, it appears a cause and effect in dry weather is more hospitable to the corn spiders and in that their food source explodes.

It is has been sometime since we have had a corn spider year. I study them. They live and then lay almost ping pong ball size egg sacks up off the ground, that just hang there. I have never seen them hatch and have no idea when the hatch is, but I always am careful around their nests. They seem like such a vulnerable thing to depend on future generations with.

There appears to be a corn spider clock, a locust clock, an fruit year clock, a butterfly year clock, so many clocks of things which appear in their own cycles woven into an outside world. Box elder bugs always come on a hot dry year.

Something it seems, is always coming.