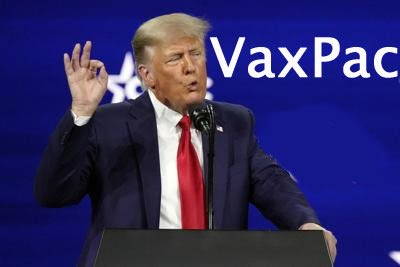 The Lame Cherry places this analysis out for your understanding and learning. None of this means that Donald Trump can not be foisted on Republicrats again in 2024 AD in the year of our Lord, but is an effective analysis of the political structure in America once Dictator Biden sent forth his Vax Mandates in attacking people in their work place with threats of death by not having a job.

In the structure of this, Donald Trump was just booed for championing his vax. The sorry state of the world is Alex Jones who was FUCK DONALD TRUMP in epic rants, was made to fall on the syringe in telling people Trumps vax is sugar water so go ahead and take it. The price of selling one's soul is great when the threats against Alex Jones to be made to say those words. Mr. Jones is fat, looks like he consumes cases of red eye whiskey at a meal, and to be made into a Judas Goat is a sorry situation, but we all do what we have to do to survive.

Donald Trump is the Father of the Vax, Alex Jones sugar coated or not. He has joined Dictator Biden in the injection protagonist, and in an electorate where his people are the ones who are mostly not vaxed, creates a paradigm, where Donald Trump has zero backing in what is left of his political base.

Mr. Trump can not challenge Joe Biden on the mandates, masks or the vax in this dictatorship, as he is the Father of it all. There were attempted  propaganda on Alex Jones replacement in Q Peters, but people having open season on them by the FBI tend to be wary of promises, so Donald Trump having people say he was against something he is for is not resonating.
In that Pedo Joe has a brilliant political structure now as Biden's Vax Dictatorship just pulled the teeth out of Trump 2024.

This dental operation, pulled the teeth out of pretenders like Nikki Haley and Mike Pompeo. They are window dressing as the main political focus and challenge now becomes the Republicrat governors led by Ron DeSantis, the cripple from Texas and Kristi Noem. The Confederate of South Carolina is making his move, but he does not have the dazzle or Biden focus to propel him into the Governors race for 2024.

Kristi Noem all but killed her chances for 2024, but in this mix of what Dictator Biden just unleashed she has a new lease on life as Tucker Carlson is appearing more canonized daily in having lost his chicken balls to goad all of you to start making yourself targets again of the FBI.

The winner of the Biden Dictatorship is Governor DeSantis who I trust about as much as Joe Biden's hands around children, but September 9th changed America from Federal to States Rights. Donald Trump is federal, as is Pompeo as is Haley. They have zero political power to challenged Joe Biden and they increase in power the moment that Dictator Biden carries through is orders to 'move GOP governors out of the way".

Biden has already unleashed the DOJ on DeSantis in Florida. Each step Biden takes exposes his dictatorship to the necessary fracturing of America into State Confederations to resist DC. Donald Trump is only a "Me Too" cheerleader on the sideline as he is Father Vax and people remember he did not protect his followers on January 6th and after. Donald Trump offers no protection from the vax or Joe Biden. Donald Trump is therefore the lame duck candidate of 2024 who as effective lost a rigged election already in 2021 AD in the year of our Lord.

None of this matters to me as Christian Protestant as I'm through with politics. This advent though of Dictator Biden destroyed Donald Trump as Father Vax holds zero political appeal for the voters who are vax criminals, hiding in their states.

This blog warned Donald John he would rue the day he put his name to this vax. The day arrived with Joe Biden's dictatorship enforcing the vax which Donald Trump loves.