Fighting Dictator Biden to the Gates of Hell 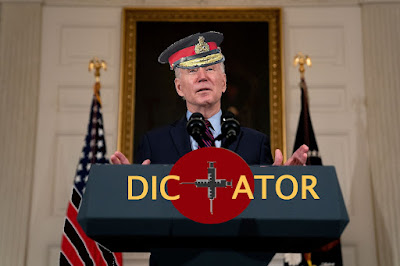 Governor Henry McMaster of the great State of South Carolina echoed the clarion call of the Civil War in his denouncing the tyranny of Dictator Joe Biden. Let the Lame Cherry be clear in this, Barack Hussein Obama was a Closet Dictator who issued intrigue and executive orders to establish his tyranny, but Joe Biden is the definition of a Dictator as he has zero Constitutional authority granted or implied in what he just engaged in, in this Vax Rape of Americans.

The American Dream has turned into a nightmare under President Biden and the radical Democrats. They have declared war against capitalism, thumbed their noses at the Constitution, and empowered our enemies abroad.

'Time To Resist' - Republicans Denounce Biden Vax
Mandate As 'Absolutely Unconstitutional,' Claim
He Has 'ZERO' Authority To Do It - Correct

Seventeen Republican Governors issued various rebuttals to Joe Biden. Some offered only legal recourse meaning they would give up after the courts. The honorable South Carolinian though issued the touchstone of revolution in fighting Dictator Biden to the gates of hell.

South Dakota will stand up to defend freedom. @JoeBiden see you in court.

What the Lame Cherry challenges in this is, a simple requirement for these Republican leaders of States AS THEIR ENTIRE FEDERAL CONGRESSIONAL DELEGATIONS HAVE BEEN SILENT ON THIS TYRANNY OF JOE BIDEN, and that requirement is, "Answer the questions when the corrupt courts in these disUnited States rule against you on the vax, and order you as Governors to hand your Citizens over to this rapine."

The Lame Cherry demands to know in this, what is the GOP's plans beyond the courts. What is Kristi Noems response when the Biden Department Of Justice orders her to comply or they will arrest her as as Vax Terrorist along with these other GOP Governors?

Does the GOP cave to this Biden dictatorship? Have these Republicans even considered that in this corrupt American system, that nothing was addressed by the courts which the 1% did not allow. Donald Trump is all for vaxing everyone as this is his tar baby. What this Lame Cherry demands in this, is that the Republicans are posturing, in courts no one can trust, so what happens when this is the FBI not tracking down Jan6ers but Republican leaders?
Does Kristi Noem assume the position and allow the cuffs to be put on as she joins the Jan6ers in eternal prison waiting for trails to break her, or does she have an operational plan beyond the courts?

Donald Trump led out Republicans to their great demise, as Ashli Babbitt being murdered along with other Americans on January 6th and abandoned them. Are these GOP governors going to just quit when Biden is ruled he has that authority by Bungholer John Roberts, or do they have next steps or are these one dimensional leaders going to quit or more of what the People deserve to be promised now, "Will the GOP deputize their populations under their elected Sheriffs with the calling of the National Guard to secure their States from this DC Dictatorship?

If this is just court cases in courts which are allowing the torture of Americans who have been associated with Jan6, then this is a waste of time to trust in any rulings there, as those same courts refused to hear election theft, are for torture of Jan6ers, and are the same courts which kept Obamacare, sodomy legalized and are auditioning pedophilia as a national right to rape children.

The Lame Cherry demands to know for the People, just how far these Republican leaders are going to take this? Are they Governors who who went to the wall in 1776 and in 1851 AD in the year of our Lord, or are they Governors who rolled over in the South for segregation in 1960 or the same Governors who bent over for Ronald Reagan in the 1980's for seat belt laws.

American lives are at stake in this. This is the last firewall Americans have. If these actions are not thought out in what comes next, Dictator Biden already has his agenda planned in he will announce in a few months that all people left who are not working for corporations will be required to be vaxed, with fines, with penalties and these Republican governors will be facing indictment for protecting plague carriers.

What is it going to be Republican Governors?  Are you the pied pipers leading your gulag states into the Biden camps or are you going to stand on your hind legs and understand that the blessings of deciding your life, meaning your liberty, was written long ago in the password written by George Washington when he crossed the Delaware.

General Washington was in a meeting with a Patriot physician and he kept scribbling on pieces of paper. One fell and the doctor picked it up, and read, LIBERTY OR DEATH. That was the countersign for the Continental Army before going into Trenton and George Washington as leader never lost sight of that comprehension of the times, in America was dead under tyranny if he did not lead.

Just answer the question Kristi Noem. Henry McMaster has rattled the AR 15 clips. Are you leaders understanding where this is going in what you are leading people into, or are you into  taking a knee in this Biden dictatorship.

The 1% has this all planned out. What are your plans governors?  Is this a stand like Bunker Hill or are you going to run for your lives like at Brooklyn Heights? Are you going to press this like Trenton against all odds?

Just what are you going to do Kristi Noem when these Dred Scott courts of the Obama century tell you that you are a slave again, as Dictator Biden is not going to stop here. He has just begun.