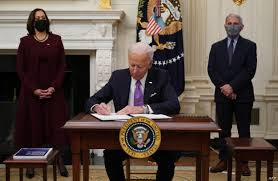 I don't understand this extermination part I'm signing
but Anthony Fauci assured Kamala that it is safe.

Clif High has done some wonderful work in actually working with statistics and numbers. He released last week that there was a 40% plus increase in industrial accidents and auto accidents from last year, meaning the vax is causing impairment of the reasoning and motor functions of the human mind.

This is not fringe media stories, these are factual data, as factual as Governor James Justice II of West Virginia is reporting what is an across the board increase of vaxed COVID cases, vaxed COVID intensive care and vaxed COVID deaths of 25%.

Governor of West Virginia laying out vaxx failures in his state... pic.twitter.com/Dcq2VFMuwq

Gov Of WV Announces At 25% Increase In The
Number Of Deaths Among The FULLY VAXED Over
The Last 8 Weeks - The Death Wave Has Begun...

Victoria, Australia BANS All Health Care For Unvaxed
This Is Beyond Apartheid And Belief - Oz Is Dead
Watch This Psycho Satanic Agent Of Genocide

The facts in this are Dr. Anthony Fauci has been lying for over a year concerning this vax, this data and the benefits of this vax. This is NOT a vaccination. This is a serum of gene therapy, whether in mRNA forms or AdenoCOVID form. Both carry a synthetic spike protein, which has been hyper invested to replicate in humans. Outside of cells it becomes a synthetic prion, which sheds and infects others.

Whatever else is in this serum, includes graphene, alcohol toxins and nano particles. All of these are published facts.

The Lame Cherry returns to Robert Kennedy jr, who has done yeoman's work with Del Bigtree in examining pharm industry evidence, and the work of other in Geert Vanden Boosch who warned immediately of what is taking place in West Virginia and the rest of the vaxed world in no responsible medical community starts mass vaccinations in a pandemic as it only breeds a worse virus. In this case, the prion is bred inside the human body to produce a super antibody which is only specific to that prion and it displaces the body's normal protections. This is why a decade of animal studies should have proceeded any introduction of this prion as in times past it killed all the host animals or it harmed humans as in the Philippines.

What should have been worked out in the labs, is now working out in the human species as a lab rat. This is unethical.
It is further a major ethics problem in Anthony Fauci, the pharm industry, and Donald Trump with Joe Biden promote these vaxes, when the survival rate against the Coronavirus Wuhan was 99.5% plus in adults aged 20 to 60 years of age. No one should have had to be vaxed for the reality that children under 18 are basically immune to this biological weapon and old people and the infirmed are in nursing home facilities and isolated already in quarantine for their protection.

Compounding all of this, as much as West Virginia are the death zones which Anthony Fauci has made hospitals. Fauci has lied about the effectiveness of Chloroquine and Ivomec with zinc in treating those in serious and critical conditions as this was a known remedy. Also Fauci has been promoting as a treatment an anti viral which has a proven history of killing homosexuals with HIV, by giving them AIDS and Africans with Ebola killing them. Fauci promoted REMDESIVIR and if one examines the COVID injuries and deaths, they link to auto immune suppression, kidney failure and lungs filling up and drowning people so they are placed on respirators. Literally the treatment of Anthony Fauci is causing the majority of COVID cases, not the virus.

The facts which have assembled are that the Coronavirus Wuhan in the non feces form, only places .5% of the population in jeopardy who are in literal terms in the process of dying, and Wuhan is advancing what the flu and pneumonia do every year in providing a natural released from life when people are dying to end their suffering. What has been far more injurious and deadly are the treatments of Remdesivir and the Vax with the prion. The Fauci Obama Gates medical treatments of the 21st century have returned to the dark ages, where Remdesvir is the blood letting and the vax is mercury and arsenic as it kills germs, yes but it kills more people than germs.

People across the planet earth are being denied their lives. Australia bans health treatments for the unvaxed which is an inhumane death sentence. Nostradamus in the Black Plague sought out patients to treat them, but in Australia they leave them die. In the United States conglomerates and government ban people from jobs, their literal necessity to gain money to live in another death sentence. There is only Robert Kennedy jr on the left who is advocating in liberal politics, but he is alone and his support system is those on the Conservative Christian Right who are being hunted down by the FBI and monitored.

I will return to the data which Bob provided me from Missouri and the projections from that data. Jeff Rense has stated that he believes 1 million people have died from this vax in the United States. Joel Skoursen is skeptical, but when one projects the numbers of communities, Bob's numbers mirror a great deal of the Brier Patch where we reside. If America has 340 million people, then 1 million dead, translates 1 in 340 people. The numbers are elderly and sick, and in a community of 3400 people, that only means that 10 people need to die from these prions and treatments, and this is why no one is noticing an uptick in deaths as it is not people draped in white sheets lining the streets, it is only a nominal increase.

With West Virginia now having the data that there is a 25% increase in COVID case, ICU and toe taggers, the first noticeable wave in this is beginning to climax. This would explain why Dr. Anthony Fauci is now instructed to provide cover for these deaths and injuries with "new variants" and now the requirement of a 3rd booster shot. I will state again COVID is NOT the Coronavirus, The Coronavirus is a virus. COVID is like AIDS in HIV homosexuals, a series of harmful manifestations from the treatment of HIV when the immune system is suppressed.

The 3rd booster is cover for the deadly and injurious effects of this gene therapy treatment and pharm's horrid anti viral in Remdesivir.

Everyone has to end the denial, not about vaxed and unvaxed, but the denial that the DAMAGE IS DONE ALREADY to humanity. Both the vaxed and unvaxed are going to have to cope with this prion as it is not designed to go away. For the vaxed, they are in a group whose brain functions appear to be degrading, they have blood clots, they have organs failing, and their immune system is burning out just as in AIDS. It does not any good to be furious over being lied to. If you are vaxed, it is past time to get your soul in order with Jesus and to get your legal papers in order, for provision for your children and for your pets, because if you degrade and can not work, you will need care from the ReVaxNiks and the ReVaxNiks are going to be the only people capable of caring for you, your children, grandchildren and pets.

For the ReVaxNiks, Jesus is the place to be, and to understand while these shortsighted vax lepers have demanded your being genocided, being denied rights and being hunted down, none of us needs a world where 10 million children in every country is locked up in some Goddamn English psycho boarding school like chimps in a zoo with Anthony Fauci making them into little amoral psychopaths. The same with all the pets. They are going to need homes, and I doubt the vaxed in their selfish world have thought one iota for the future of their family and pets, so that falls to a community, much like most of the world used to be, in plagues would kill off parents and children, and the survivors were farmed out to some relatives or neighbors to produce a character which will not be the wild dog killing the food supply or Jack the Ripper knifing all the whores.

It is not any secret of our poverty in being a poor orphan girl and my begging for donations, but God engineered a rescue again on September 2nd and I did the Good Samaritan thing and did not cross by on the other side of the road. If you do not want to be the SOB that the military transports are pounding your corpse into road kill with a thousand vehicles, maybe you should get on your hind legs now and be human and start looking out for the piles of dead people and what they are leaving behind.

I checked on West Viriginia's numbers and they are mirroring when the bio weapon was spread in January 2021. The vax was never meant to suppress the plague. It is a gene therapy and it has failed in protecting anyone. It has though literally produced a new human disease which is injuring people and killing them, along with the Fauci treatment.

As long as the ReVaxNiks stay away from the Vax Lepers, their odds increase in health. The Lame Cherry has already informed you that there are indeed seasonal viruses appearing, one infects the ear, there is a diarrhea spreading like last year and there is a hoarse throat which is appearing among the vaxed, as when this began in the spring of 2021 AD in the year of our Lord.

The numbers are not lying, Dr. Fauci is. It is the synthetic prion in the vax which is causing the "COVID" and the Remdesvir promoted by Anthony Fauci causing the "COVID". This blog has covered the projections of the experts in this in the worst of it. We do not know though what this prion creature will manifest years from now and decades. We do not know if it will open viral doors or viral storms in humans who have been vaxed. We do know numbers of people who have been vaxed, not with saline injection platforms to keep the numbers down in statistical effects, that people are injured, they are not recovering from those injuries months out and there are numbers dying.

Logic would dictate that Anthony Fauci's booster is probably what Jeff Rense was postulating in the saline injections were meant to keep the tally numbers down, and the logical projection now is that the booster are the real prion serum which will infect those who only received the saline solution at the start of this. In the confusion of future events, no one is going to be able to follow data in the spring of 2022 AD in the year of our Lord, as there will follow another West Virginia surge five months from now in October, November, December, January, February which brings us to spring 2022 AD in the year or our Lord of March 2022.

You are being told something which is based on the 1% putting Fauci on leash and making the fool parrot them, meaning the above is data, which factors in a projection that you probably should be prepared for, and if you need to make up for donations, you better get in gear before that 5 month window of time comes anywhere near to closing.

Yea  though I go unvaxed through the Valley of Death, I shall fear no evil.