This is an exclusive exposing the Barack Obama birth certificate as an absolute forgery and it has been in plain sight all along.
There can not be any Obamaniacs descending on sites claiming the experts are wrong, pixels are wrong or any other way of muddying the waters as the 1000 points of darkness have been carrying out their marching orders.

Below is a cut out of one part of the published Barack Obama birth certificate which exposes the fraud and forgery of this document. This is the certified certificate from Barack Obama himself. 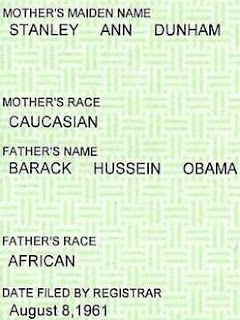 Now look closely at Barack Hussein Obama sr's race. It is listed as African.
That doesn't seem all that interesting and no one has noticed it until one looks that this is an official document filed in August 1961.

Most people on the internet and blogging have no sense of history nor in the use of words and it is this lack of sense which is going to bite whoever forged this document.


Up until 1968, the standard term for all Africans was "negroe". This fit with the absolute secular scientific teaching of the day which notes the world has 3 races in Mongoloid, Caucasoid and Negroid.
It was not until the Black Revolution when negroe or negro became a foul description in the late 1960's and then "black" was demanded by this group to describe them.
It was not until the late 1970's when political correctness came into vogue that it ushered in by the 1980's the term "African" to describe all blacks.

Whoever forged this birth certificate was not utilizing the 1960's terminology which a black person would be listed as. They fell instead into a warped year 2000 politically correct description of "African".

This is absolutely telling as if you looked at birth records in Prussia centuries ago, those people would be termed Prussian, Bavarian etc... as Germany did not yet exist as a termonology for nation state. If someone was listed as German in 1700, it would be glaring forgery just like the Obama forgery stuns the eyes once one knows what they are looking at.

One could research the certificates in Hawaii for absolutes, but considering as has been warned in this blog that Hawaii is a Democratic state, has Democratic officials who have been hemming and hawing about this certificate and only upon precise questioning do they start backing down as it means their jobs and prison time if they certify a forgery as real and this is Democratic transplanted son Barack Obama carrying on this charade, could one ever get a clear answer from them unless one looked at numbers of birth certificates to precisely learn how Hawaii was labeling "blacks".
If this case it is African, then why is not Stanley Ann Dunham labeled correctly North American after her continent? She though is labeled correctly as caucasian as that is exactly as she is.

If one still today searches enough death certificates in the 50 United States, you will find listed on them the term NEGRO. Now that is over 40 years since 1961 in Barack Obama's birth and political correctness has not reached completely into the coroner's records.
That fact is scientific and if it still exists today as proof it certainly is the proof from before 1900 in America and past 1960 that all blacks were noted as "negroe" or "negro" on all public records from birth certificates, marriage licenses, passports, driver's licenses to death certificates.

Whoever forged the Barack Obama birth certificate got caught in Mr. Obama's own political correctness.
In 1961 America, blacks were negroes and not Africans no matter if they came from Africa or not.
If one cares to examine the Negroe Leagues in baseball where blacks were to "pass" as Cubans to the United Negroe College Fund to the National Association for the Advancement of Colored People, there was no African at all in any terminology.
One was negroe on legal documents and "colored" in common usage.

No pixels in this. No questioning borders and no questions about the researcher's expertise as negroe is American history and scientific fact just like whoever forged the Obama birth certificate got caught in political correctness in not being able to use a term they were trained to avoid.

That is a fact. This birth certificate is a fake.