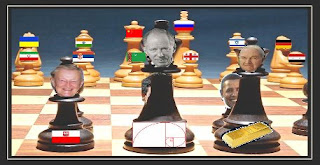 "In life it is always so much easier to understand the game, if you know the rules, " the British will inform people of a lesser flag, and, as usual they are quite correct in their advice.

There seems to be a great deal of excitement over what is going on in the nation state of Georgia, with break away provinces and now Russians getting into the fight. What people do not understand in their zeal of not liking what is occurring is it doesn't matter who started this as it is started.
What matters are the relevant facts.

Fact 1: The world just witnessed a "tell". Vladamir Putin is quite adept at the chess game when he has time to sort out moves. He can use Polonium 210 to nuke a British subject and can counter George W. Bush feinting about putting missile shields in Poland and the Czech Republic by talking about landing nuclear bombers in Cuba, but when the big punch comes, Vladamir Putin does not think. He reacts and does so very badly which bring us to Fact 2.

Fact 2: This is not George Bush, neocons or Zionists. This is George Bush and Dick Cheney being allowed to set up a strategy for the guys peaking from behind Jacob Rothschild and David Rockefeller, namely a President Barack Obama of this week and Prime Minister Gordon Brown, so they can initiate Bishop Brzezinski's opus rectus.
As the British say, "It is so much easier if you know the players."

Fact 3: In one day, little children in the Warsaw Pact who had Russian Soviets raping their mothers and sisters for 50 years were reminded what life with Russia is like. In one day, every Muslim is remembering the difference between war with America and war with Russia in Afghanistan and Chechnya. In one day, every little child from England to the Ukraine is remembering Putin's tantrum one cold winter's night in cutting off oil and gas.
No one is remembering America being aggressive. Everyone is looking at those Russian tanks rolling into Georgian lands.

Fact 4: Georgia and the Ukraine got exactly the reaction they desired in exposing Russian aggression. Jacob Rothschild and David Rockefeller got exactly what they wanted in exposing Russian aggression herding the rest of the world to be afraid of them, and, Zbigniew Brzezinski got exactly what he wanted in positioning Russia for the Caspian Gambit and now in this Georgian Feint, Russia if it acts out again in a few months will be deemed by the world the evil empire again.
Check.

As noted in this blog a week ago when everyone was claiming that America had screwed up and lost the Caspian Basin oil and gas fields, it was pointed out that the west had no intention of those fields for now or for the reason of building a pipeline from them.
Russia can develop them now like bio fuels are being allowed to be developed for the purpose of the cartel taking over them later, but the Caspian is a gambit which now has Russia and China lured into a region it will be forced to defend as front in a war.
Different groups have different reasons. George Bush's sect which is Sec. Robert Gates line with John McCain want a Eurasian war fought in the Caspian as it is less populated for civilian deaths.
Zbigniew Brzezinski personally as it was exposed here wants the Caspian line as it will draw off one of Russia's spears meant for Europe in war which will leave his native Poland untouched in that war.
The Rothschilds desire the Caspian as they had it, Putin took it from them and booted them out and they want it developed for free before they take it back and rub probably his corpse's nose in it.

Georgia is a brilliant feint and the profile of Vladamir Putin showed he would react and did as he was expected to do when called out of bed by his generals telling him in hysteria that Georgia was blowing the berussian out of Russians.
Vladamir Putin of course is going to be furious over this, not because of what Georgia or the cartel did, but because he got suckered by his worst enemy in himself. Of course, the profile also will on Mr. Putin relate what this son of Japeth will do when the next gambit occurs.

This is what Georgia is immediately about. China is having terrorists problems from Islamic Chinese and Turkmenistan separatists. They seeing Russia now being embarrassed and remembering not so fondly Tibet's press in their murderous overture will not be so keen on acting out for the Persian communists.
China after all as it beats Christians and imprisons citizens has that glow of the Olympics and it likes looking like pretty Peking girl in the window again and does not want to loose the Peking tart.

Russia, of course, will now look at an allied battle group steaming into the Persian Gulf to stop shipments of refinery chemicals to Iran as something if it reacts on will have the entire world knowing the 2000 pound Siberian bear is chewing up the world again, and, see it's military option gone.

It is accepted that Vladamir Putin will not react this time, but sit on his hands fuming as leverage against the Islamocommunists of Iran brings the Iranian people out against the Persian communists.

While it is easy to see the obvious which was being warned here of people not to be building companies and investing in that region, unless of course it was a Rockefeller, Rothschild or Soros project, the future in this Biblical proportions board do take some God given insight.

Vladamir Putin now has himself to blame for reacting into this which he was profiled to do, and, why it was done now. He will now have this inside of him simmering to a boil.
If he reacts again, then the central Europeans will get exactly what they want in a reformed empire led by Germany, Italy and Greece.
If he does not react, the Persian communist regime will be toppled and the Russians and Chinese will have another front on the Caspian to contend with as this projects north into the "stans" which in the Caspian Gambit will have this turmoil fomenting within their borders.

Of course, the Russian GRU and Chinese PLA will crush internal opposition and it will crush them as the civilians revolt.
So the Russians and Chinese both understand time is short. They will in due time as they recover have to react and march their troops out and start the third World War.

There are Chicoms now sitting in Peking having the dawn of understanding come upon them. They went to bed drunk with euphoria over wedding Russia in their gambit to force America out of the region and in time spoil her of Alaska and make the west vassal states.
Now though in the faint light of what Vladamir Putin just did, they are seeing they married the 300 pound ugly girl in the sack dress and they are stuck as she has the oil and the munitions which China either keeps cuddling or they will be turned upon her.

Granted, it is much easier if one knows the rules of the game, but before people start thinking a lost Caspian is a loss, they should remember this is world chess and a game played by the elite.

I will repeat, this is a game of the elite they amuse themselves with it for centuries while they wait for the real prize this has been all about all along.

It is not the gold of David Rockefeller, but they worship it for the alchemy it brings for the sign on Jacob Rothschild's piece.
This is a game, so there is no need to be excited about it, but to only enjoy the tacticians moves as they play as that is what they really desire.
The real prize is what the Rothschilds hold in that simple drawing and it is why they hold it.