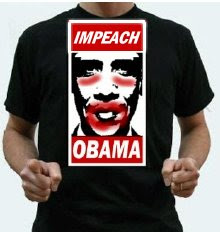 The American Patriot who saved America from Michael Dukakis in the infamous Willey Horton ad and blessed America with the support for that wonderful legal leader, Justice Clarence Thomas is coordinating an effort again equal to the effort he instigated concerning Bill Clinton.

While it is a noble task which Mr. Floyd Brown has undertaken again in defense of America, this blog is not a patient sort when it comes to the American Lady. Leaving her abused until 2013 when Congress, if Americans can vote in numbers enough to put in a Republican majority, and not have the election stolen again in ACORN methods, is akin to watching a Lady beat up by her husband for 4 years, hoping the neighbors might do something, providing the police uphold the law.
This blog has explored numerous situations and has mentioned in this past week about the need for a Governor like Arnold Schwarzenegger to simply order the California Attorney General to hold a Grand Jury hearing concerning the indictment of various Obama officials who have proven corrupt and are as Nancy Pelosi guilty of high crimes and treason due to her electioneering in 2008 in plunging the Stock Market to elect Obama.

The 2nd Amendment is not just an Amendment about keeping and bearing arms for self defense, hunting, pleasure or military use, but in this strategy the words a well regulated militia is the tool by which to stop the criminal corruption of the NeoProgs.

American history has a vast array of history, historical precedent and authority for the local militia raised as "armies".
Thomas Jefferson and James Madison trusted in such local militias along with the standing army.

People ignorant of history fail to realize that all through the Civil War, wealthy people raised their own units or corps. The 10th of Maine was a local militia which was led by Joshua Lawrence Chamberlain who literally saved the Union forces at Gettysburg.

Theodore Roosevelt's infamous rough riders along with Gen. Otis of the Los Angeles Times newspapers both raised private armies for the Spanish American War. TR would lead as Col. Roosevelt in Cuba and Gen. Otis would lead in the Philippines campaign.

The boy General, George Armstrong Custer, was with the Michigan Cavalry in distinguished honor much like his twice decorated brother, Tom, with the Medal of Honor.
This is how General Custer is degraded by small people who only refer to him by his rank in the US military of colonel as that is the rank America gave him after the war as a cost saving measure.
This boy Colonel was trusted though to deal with the slave issue, Texas rebellion and governing Texas after the Civil War. George Custer was the Viceroy of Texas by a grateful nation.

So states have been in the business as well as private Citizens in raising notable military armies which served the United States. The fallacy is that the National Guard is local, because it is not as it was nationalized long ago. The reason the leftists tried to smear the militias is because they are the balance of power check to federal despotism.

In that, I would like to venture an example of reality in Gen. Robert E. Lee, being loyal to his country of Virginia and yet a national figure in these United States.

While it would not be necessary, take for example if Gov. Schwarzenegger were to afford Alan Keyes the rank of General of the state of California. Mr. Keyes as a private Citizen can on his own attain the rank of General by simply forming a militia corp as it's leader.

General Keyes in his office can then assemble all the staff and arming he chooses. This would include a JAG or Judge Advocate General office. This office under the 10th Amendment would be legally capable of convening an investigative Court Martial on any federal or state official where evidence revealed a Constitutional crime had been committed from anything ranging from dereliction of duty to usurping the Constitution.

General Keyes presiding would have as much legal standing as any California court or any federal court, because of the 10th Amendment. General Keyes would be afforded military legality on historical record in America, even if the only jurisdiction he had for his militia was the ground they stood upon.
Abraham Lincoln was an officer in just such a militia.

General Keyes on court jurisdiction could indict Nancy Pelosi on treason to in court findings demand on military grounds the long form birth certificate concerning one Barack Hussein Obama, due to the fact Mr. Obama is now head of the military forces of America.
The caveat though is General Keyes is NOT part of the standing US military, so he is not under the jurisdiction of the federal standing army or California federally mandated National Guard.

Legally General Keyes would have jurisdiction over all issues which affected his jurisdiction from taxes to deployment. General Keyes would only be answerable to the Governor of his state, who could not stop any Court Martial as it is judicial matter.
No Governor could deploy the General out of state as no state can invade another state or nation. No person in the White House could issue any orders to General Keyes as he is not a federal military officer nor could he be federalized as he is under Constitutional Authority in the 10th Amendment.
His well regulated militia could have the best legal minds involved in this.

For those who say, "General Keyes would not have any ability to enforce the Court Martial judgments", that is a yes and a no, answer. For while General Keyes would not have jurisdiction to send arresting officers to arrest someone like Bearick Obama, he would have the legal extradition to file his charges before California Federal Court and demand immediate extradition on those people so indicted.
Of course, the current clutch of federal judges would as the US Attorneys balk at such extradition, but the purpose of this is hammer and anvil, in setting the stage of the Constitutional Crisis Bearick Obama and his usurpers have foisted upon America.

General Keyes under the 10th Ammendment will have legal standing to appeal any action, along with the appeal for a speedy trial or hearing, as this is a national emergency.
This extradition will force the United States Supreme Court to hear this case, and thereby force the checks and balances the Court should have been implementing from election day one.

It frankly is quite possible on a hearing status in states beyond California if this issue was put into a vote in areas like Oklahoma, that an Oklahoma Citizen of equal national leadership such as Mr. Keyes, could in fact in county by county vote, afford a special JAG title to a General Steve Largent, who could undertake like Court Martials and if anyone was attempting to invoke or implement something like Obama's death panels, they could indeed in their voter granted jurisdictions arrest every federal employee behind it and if Speaker Pelosi were to arrive in the jurisdiction or Mr. Obama, they would be arrested if indicted.

This is where the spit hits the fan in there are enough notable Americans in areas who could indeed undertake with full authority what needs to be done, for the expressed purpose if the headlines hammered daily that areas of all 50 United States under the 10th Amendment and 2nd Amendment had military leaders indicting Mr. Obama or whoever, then the hammer will have driven the nail of this to the anvil of forcing the compliant courts and congress currently run by NeoProgs to be forced to deal with Constitutional issues.

It might be a most interesting situation to have from North Dakota to Texas a zone where if these indicted people flew over, the plane would be forced down and the perpetrators arrested like Roman Polanski.

Floyd Brown and others in this are doing the correct maneuvers, but America can not be left to be raped as she is by Axelrod Inc.

One will find the good Citizens of Ohio in their militias before statehood were quite adept at law in capturing spies, traitors and whatever, holding trial and hanging them before the gavel's judgment quit ringing off the forest court room.

Mr. Obama and his band of pirates of course should face impeachment, but waiting 4 years is as the Oklahoma legislator said, "Too long of time".
There are means for Patriots who care to risk as the Founders their reputations on this as Alan Keyes has. The difference in this, is when the courts are subverting quick justice, then one must as an American build one's own legal court with jurisdiction on Constitutional Law and historical precedent.

Mr. Obama chose these military waters, let him bathe in their Constitutional mandates which avert to him no more standing in law than a private in a state militia.

That is the beauty of these United States of America.