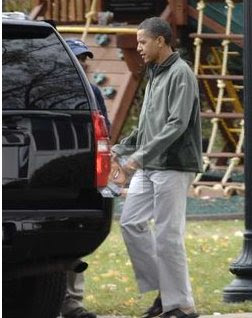 After Matt Drudge posted a photo of Barack Hussein Obama on his Thanksgiving extended getaway vacation in his holding only one thing, but a copy of GQ with his face on the cover, there comes a time when definitions just need to be created beyond narcissism for Bearick Bowbama as he is not like the mirror mirror in asking who is fairest of them all in love with hisself, but he is a product of fiction glamorizing hisself to deity extremes. 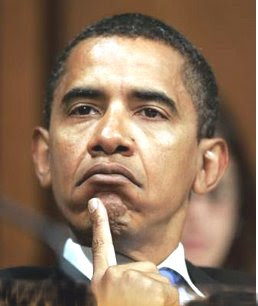 What kind of word is there which would define I Obamus? Surely a 21st century Caesar as his Obamalings term him with halo and blasphemous name of messiah could have some title.
Like a French Queen, Obama peers over his mole fungal nose. (Yes moles are fungus leeches which attack themselves to humans, produce a dark melanin crust and then thrive feeding off of the human body). 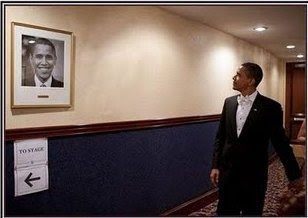 Then there is the vestige of hisself worship, worshipping his worshipfulness in more worshipment than 200 Popes and a coming anti christ who could fill the Vatican with pomp, instead of God.
Having seen my photo often enough in public, one does look, but one looks with humility and quickly moves on.
Mr. Obama though always as he beams bright in photos cast of him on the wall, seems to be fumbling in his pockets for a flashlight to cast an even more noticeable nod to "That's me!"

An Obama who could not read Sarah Palin's political defining book, because he was not featured in it nor put in the title of Going Obama, could somehow find the time to have someone go out and purchase a GQ magazine for him, or was it GQ sent him a another Obama freebie as the United States slugs along in "the good news of ONLY 400,000 plus people applied for unemployment instead of the half a million expected". In any event, there was Obama clutching his magazine, with hisself on it, like Linus dragging his blanket along for comfort until the Great Pumpkin manifested bringing toys to all the little boys and girls in the Obama patch.
One fully expects that if Obama does not have eyes in the back of his head, that he has photographers taking video of him so he can later watch hisself going and coming at the same time.

So the word to define Obama who is not just in love with hisself, but in worship of hisself is a perfect word from Latin for worship as that is exactly what Obama does to hisself.
He is the perfect reflection of that thing on his nose in a mole, a rather dark looking thing which became that way, because he could not live in the light of day, but had to manufacture a blackness to survive as he fed upon the American body he was cannibalizing.

As Obama the mole, he needed to define his wart like fungal appearance as a beauty mark which enthralled all the Cynthia McFadden types to hysteria in politically raping other women.

The word which defines Barack Hussein Obama is CULTUS, the act of worshipping oneself no matter the devouring scab one is.

Enjoy your magazine Mr. Obama, because I give thanks for the day when you face will be on international posters for the crimes against American humanity you have assaulted them and great portions of the world with.

Over 400 dead Americans in Afghanistan as Mr. Obama decides will it be pink undies for the promenade or the lacy green thong.