As an exclusive to this blog, information has come to it that Cook County Illinois, lists two homes to the address of Barack Hussein Obama's Georgian Mansion, or the Georgian Mansion he lived in for years which Saddam Hussein purchased for him through Tony Rezko, but attorney William Micilli as owner and taxpayer the entire time. 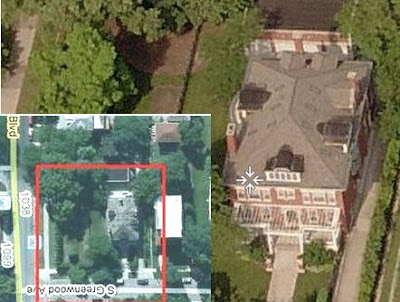 In Microsoft earth photos and other satellite photos there just does not seem to another house on this site, and one would have presumed in the 2008 research that someone would have noted another brick house was on the site and in selling the home, realtors would certainly have listed one would be buying two houses for the almost 2 million dollar price tag.

The details of the two homes from the Cook County site show this:

The oddest part about this is that the photo on the government site for the small cheap house, appears to show it is in the back, and there is a street running against it. The problem is in the aerial photos, there does not seem to be a street in back, and to left is the lot which Tony Rezko sold Obama in a sweetheart deal. To the right are other homes and in the front is Greenwood Avenue.

It seems that everything connected with Barack Obama makes absolutely no sense. His conception is bizarre, his birth is odd, his abandonment is strange, his schooling has Malcom X's attorney writing a letter for Obama to get into Harvard without ever having met him, but the benefactor works for the Warren Buffett of Saudi Arabian finance, Obama has more Social Security numbers than a truckload of Mexican border busters, Obama gets an out of nowhere book deal and he ends up having Saddam Hussein fund his first Senator campaign and buying this Georgian mansion, and Obama's names is not even on it.

Nothing about Barack Obama ever adds up or makes sense once one starts looking at the details.

I am certain this has a plausible explanation like Obama's mansion had a baby house, because Muchelle refused to have an abortion.
The baby house is invisible except from the back, so no reporters ever noticed it.
Obama built it in his spare time in November 2008 to increase re sale value...........even if the house lists as almost 90 years old sitting on the same site as Obama's mansion and it's 4 car garage.
The place doesn't even look like a horse barn or a milking parlour for Mrs. O'Leery's cow to kick over a lantern.

So it is just another Obama mystery, in a tale of two houses........maybe that is where Donald Young lived before he died.

Who knows, the puppy press is certainly not going to find Obama's magik mystery house, even if they found all of McCain's wifes homes.

Tis the Age of Obama.