I received a solicitation from LIBERTY ACTION GROUP PAC with the female solicitation on the other end from Daniella, with no information who they were in stating they needed to raise 5 million dollars from Donald Trump.

In knowing the reality that the Victory Committee and the GOP are the ONLY sources to donate to Mr. Trump, my first question was, who was trying to siphon off money from Mr. Trump, and in reviewing the FEC documents on this group, something is obviously a scam in this as this group raised around 750,000 dollars and spent that much, without donating anything to Donald Trump.

The phone call originated from Waterloo New York, and is part of a relay system working in New York wit these numbers listed on this page:

The Federal Elections Commission filings on this group state it is:

The site is basically a dead drop site of no information and information warnings on the information they are collecting on visitors.

Who is lists this information on who is behind Liberty Group and it's start up date was in 1998 and ends after the election in 2016. This site posts links to gun control stories, but has morphed into siphoning money from the Trump Campaign in it's focus at this point.
As one can assess from the information below, those behind this are layering in another front LLC to hide who is behind all of this as this now traces directly back to Florida ownership.

The phone number 1.5707088780 is interesting as the same privacy front is listed to another site which expires in January 2017 and will not load, listed as CLINTONEMAIL.COM.


Two emails are listed as contacts:


The J Cammer is one Joey Cammer, who is part of an FEC group Liberty for Liberty Action Group.

There are four Mondern Media Group LLC listings, so that remains a bit of a mystery as to who this shadowy group is being run out of Austin Texas and using a phone bank  in New York.
We are though fortunate to have this information from the FEC:

Henok Tedla, appears to be an Ethiopian in Alexandria Virginia, who is a CPA, hence fitting the limited number of Henok Tedla's in the world who would be qualified to be an accountant with three quarters  of a million dollars, being siphoned from the Donald Trump for President Campaign.


Henok Tedla, and like all Ethiopians, the women are gorgeous. 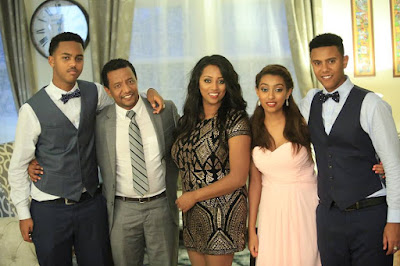 Mr. Tedla is a very successful accountant by the clothing and surroundings he has accumulated. The Ethiopians are under most radars, but they are a power influencing national elections and working inside the Obama regime.


Ethiopian Americans May Swing the Vote in Virginia at Tadias ...

Ethiopian Americans May Swing the ... blue column for Sen. Obama this Fall," Virginia Gov. Tim ... much support from your community," he said ...


The individual responsible for Progressive Priorities PAC is listed as an Alexa Roth, out of Webster Texas. There is a problem in Intellius search which always lists associates and  relatives, lists none for this name nor age. It is as if "she" just appeared.


The phone number in search reveals the Austin area code base. Austin is the base of Liberty PAC and that address is on the "magic mile" of high investment, while this address in Google points to a location in the middle of the street.


It appears this person is active politically in vigils at the White House, and the focus appears to be Ethiopians being assaulted in Saudi Arabia.

I would add at this point, whenever anyone in foreign intelligence sees anything with a Virginia address, they become nervous extremely fast, especially when the addresses are Langley or Alexandria.

Federal Bureau of Investigation, which also operates under the name FBI, is located in Alexandria, Virginia. This organization primarily operates in the Bureau of ...

T
So we are dealing with an entity which originates in Austin Texas, has phone banks in Waterloo New York and the account appears to be located in Alexandria Virginia, with all of who is really contracting all of this siphoning of funds from donations to the Trump Campaign, being hidden in the shadows of one of  perhaps four LLCs.

This the problem with shadow fronts in they are designed to be built this way. A great deal of money was generated. On Open Secrets, it lists 16 top donors of of $200 plus, and none of them bring the number to three quarters of a million dollars.
These 16 donors only list at $5202, which is a bit short of 750,000 dollars.

This is where the Federal Election Commission reports come into play on their website, because the biggest donors are DEPOSIT BANK CARD, in the July Quarterly link,  and the numbers are all funky in amounts like, $15,946.29 etc.... in over 150 pages of these filings. 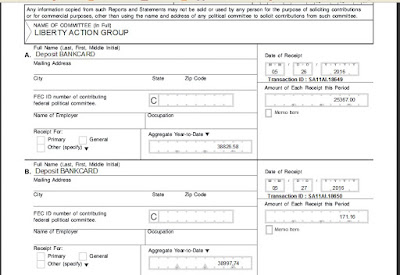 Obviously something is wrong here. What this looks like is someone has discovered a way to hide the transfer of large amounts of money in odd amounts, and has done so under the cover of a pac, with a few large donations, taken off of Right Wing lists.

This is another situation which must be investigated. It must be something aware of as these are funds which should be utilized for America, but the records show they appear they are not.

Who is beyond this and what is really taking place must be investigated by the FBI in a real investigation by the Justice Department and not a Hillary Clinton crimes swept under the table again.