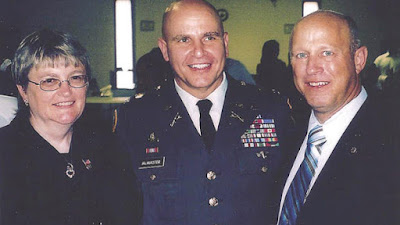 Who Grins at a son's funeral?

Would most you define John McCain as a prick?

Most probably would, and most would note that pricks hang around together, pricks who wanted to blame others for their life failures in Vietnam like John McCain who championed another prick named Herbert McMaster.

Stay with this for a moment as this quote about McMaster in Iraq and being a favorite pet of George W. Bush whose family are as caustic as McMaster and McCain explains where this post is going.

Despite public praise from President George W. Bush, McMaster was twice passed over for promotion to one-star general upon returning from Iraq. To Zelikow, the Army’s failure to elevate one of its smartest officers was a sign of anti-intellectualism in the ranks and “very serious institutional rot.”
“Iraq was not the Army’s finest hour,” he said.
Others in the Army said that the decision reflected McMaster’s impatience with underperforming subordinates, his temper and his tendency to clash with superiors.


This now shifts to Lt. Colonel Herbert McMaster sr. who recently died in a geezer home where he was left by his son, and family, and that death is now under police investigation.

These are the details:

The Philadelphia police homicide unit, the Philadelphia district attorney, the attorney general’s office, and the health department are all now reportedly investigating allegations he was left to die in a chair after falling down and hitting his head. Members of staff at the retirement home also reportedly told McMaster’s family that certain documents relating to his death were falsified.


So this 84 year old boy, fell down, cracked his skull so it bruised the brain, swelled up and he stroked out as the swelled brain compressed the stem and shut down the lung and heart functions.

You got an old military man whose son is a prick, chances are he is a caustic prick too as that is where junior learned to be a prick like John McCain liked. So he treated the staff at the geezer home like they were all gooks from the war in abusing them. The dreaded having to deal with him as he was probably a big strong old duff yet, and when he fell down, the staff hoisted him into a chair, and no one bothered to check on him as no one liked him. See if he had treated the staff well, if junior had been a constant fixture there in appreciating the staff, they would have made time to repeatedly check on senior. Instead they left him in a chair and were glad he was quiet.
In that time he died.
The management discovers the old duff is dead and has an OH SHIT moment as the staff probably reported the fall and no one did anything as no one cared as no one cared about them. Knowing they had the NSA terrorist Hebert McMaster junior about to send  them to Gitmo, they changed the records and wanted it all to go away as just an accident, but it did not, as someone started poking around as junior wanted to know why his old man died as junior felt guilty.

That probably explains all of the above and what was taking place, and now some overworked and under appreciated people are about to have their lives destroyed, because of a bunch of pricks.

See when my Mom was in hospital, someone did abuse her in they threw her into bed one night with a broken hip, as she had "disturbed" the attendant at 2 AM which was the attendants job. She was removed, but we made sure all the staff was thanked, we bought candy for them, and I even baked rolls for the rehab staff, and everyone was smiles around Mom.

See if you are not a prick, people tend to take care of you in shitty jobs, because they know you are watching and that you reward them. Herbert and Herbert were rich men, but they never showed the most important people in their lives any appreciation. So  when someone got into trouble, he died, instead of an alert going out, and staff their thinking, if he would only die, we could get someone into that room who was not a prick.