Do you remember under a week ago when the Lame Cherry posted that who was behind the "fake chemical weapon attack in Syria" was British MI6, the same Christopher Steele MI6 with Theresa May spying on Donald Trump, the same Theresa May who got Rex Tillerson fired for trying to goad the United States into blaming Russia for another fake chemical weapon attack on Russian traitors in England? The same Theresa May who led President Donald Trump to bomb Syria a second time for Greater Tel Aviv?

Well, meet the Christopher Steele fraud in this episode in British Intelligence Officer who has George Soros as his Netflix propaganda and publicity agent, in James Le Mesurier, who has been spending your money as American taxpayers to set up a HUMANITARIAN TERRORIST INTELLIGENCE NETWORK in Syria, termed the WHITE HELMETS.
Few in Syria have ever heard of this espionage group who claim to be search and rescue, but the fact is Syria has a real search and rescue which does save lives. 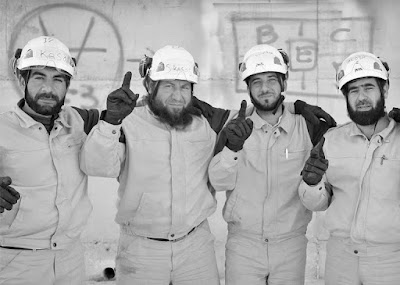 The head of the Organization for the Prohibition of Chemical Weapons in Alexander Shulgan released this statement confirming what this blog exclusively published in MI6 was behind the staged attack in Syria which Donald Trump almost started nuclear world war over.


"Therefore, we have not just a "high degree of confidence," as our Western partners claim, but we have incontrovertible evidence that there was no incident on April 7 in Douma and that all this was a planned provocation by the British intelligence services, probably, with the participation of their senior allies from Washington with the aim of misleading the international community and justifying aggression against Syria," he stated. -Sputnik


Who are these White Helmets? The organization verified by Snopes, a duo of fat old liberals who never get off their couch in America?
They are a well funded group whose members STAGED FAKE VIDEOS and was busy covering up the war crimes of mutilating of Syrian Soldiers bodies by burying the corpses, all ran out of the Obama White House as this blog first posted.


In November 2016, the Revolutionaries of Syria Media Office, a Syrian media organisation, published a video showing two White Helmet volunteers performing a staged rescue operation for the Mannequin Challenge meme. The organisation apologised for their volunteers' error of judgement and said it had not shared the recording on their official channels.
In June 2017, a member of the White Helmets was suspended indefinitely after he was discovered to have assisted armed militants in the burial of mutilated corpses of soldiers belonging to pro-government forces


The basis of the White Helmets if the May Day Rescue Foundation which created all through the Middle East a British espionage network under the cover of humanitarian aid.

It was established by James Le Mesurier, a former British Army officer and United Nations staff member, in 2014, and currently operates primarily in the Middle East through offices in Turkey and Jordan


The funding for the White Helmets is the New World Order in basically the Dutch, Americans and British. I repeat in this that these nations just bombed Syria on evidence supplied by a group which covers up war crimes and staged fake propaganda.

The White Helmets receives charitable funding from the United States, the United Kingdom, and other western governments. Initially the United Kingdom Foreign and Commonwealth Office was the largest single source of funding through Mayday Rescue Foundation. As of 2016, SCD state they are also partly funded through Chemonics, a U.S. based private international development company. Funders now include the Canadian government Peace and Stabilization Operations Program, the Danish government,  the German government, the Japan International Cooperation Agency, the Netherlands Ministry of Foreign Affairs.[62][63] the New Zealand Ministry of Foreign Affairs, the United States Agency for International Development (USAID) and the United Kingdom Conflict, Stability and Security Fund (CSSF). USAID have contributed at least $23 million from 2013 to March 2016.  The British government had provided £15 million of funding between 2012 and November 2015, increased to £32 million by October 2016


Chemonics mentioned above is part of the Clinton money laundering campaign of Haiti. This NGO embezzles money and it simply disappears. This is the plug in of charities for terrorism in the West and direct assistance by the British and Americans for the "good terrorists" who murdered hundreds of thousands of Syrians.

In 2012 Chemonics came under scrutiny by the OIG for their work in Haiti after the 2010 earthquake. Chemonics was the largest single recipient of post-earthquake funds from USAID, receiving over $196 million in contracts many of which were "no-bid."
Audits specifically cited Chemonics lack of a comprehensive monitoring and evaluation plan and that "some of the performance indicators Chemonics developed were not well-defined." Chemonics also spent more than 75% of program budgets on material and equipment when an expenditure of only 30% was planned

Chemonics is most interesting in they hate Black People in they refuse to hire them.

In 2016, A Department of Labor investigation into Chemonics’ hiring practices found that the group discriminated against applicants based on race while trying to fill entry-level positions. According to the Guardian, none of the 124 Black Americans who applied for the jobs in Chemonic International’s regional business units were hired. Chemonics agreed to pay $482,243 to job applicants who were subjected to racial discrimination in the company’s hiring process, the Guardian reported.

This is who is pumping money into Le Mesurier's MI6 Operation in Syria and if one rubs the dust cover off of Le Mesurier what appears is the mercenary covert operations which merged with the notorious Black Water, none other than Donald Trump's  confidant in Eric Prince who ran that CIA off book operation.

Prior to his founding of the White Helmets, Le Mesurier served as Vice President for Special Projects at the Olive Group, a private mercenary organization that has since merged with Blackwater-Academi into what is now known as Constellis Holdings. Then, in 2008, Le Mesurier left the Olive Group after he was appointed to the position of Principal at Good Harbor Consulting, chaired by Richard A. Clarke – a veteran of the U.S. national security establishment and the counter-terrorism “czar” under the Bush and Clinton administrations.

The White Helmets claim they are not connected to any terror groups, but they were burying bodies of mutilated Syrians which terrorists had murdered and the essence of Blackwater has been off book funded terrorism which the CIA could not become involved with.

They claim they are not “tied to any political group in Syria, or anywhere else”, yet they are embedded with Al Nusra Front, ISIS and affiliated with the majority of US allied terrorist brigades infesting Syria


This is who provided the fake evidence which Donald Trump, Macron and May all cited as proof of a chemical weapon's attack in Syria. For the record, the official, OPCW, had not even deployed to the areas, so there could not be any evidence.


The nine-member OPCW mission people has yet to deploy to the city of Douma according to the organization's Chief, citing pending security issues.

"The Team has not yet deployed to Douma. The Syrian and the Russian officials who participated in the preparatory meetings in Damascus have informed the FFM Team that there were still pending security issues to be worked out before any deployment could take place. In the meantime the Team was offered by the Syrian authorities that they could interview 22 witnesses who could be brought to Damascus," OPCW Director-General Ahmet Uzumcu said as quoted by the organization.


The Russians are correct in this in pointing the finger at MI6 and the British as this is their operation. For a reality check in this, the White Helmets has millions of dollars and an army of "volunteers" who are all assisting ISIS and al Qaeda. So you understand the point, the volunteers are ISIS and al Qaeda in where numbers of them disappeared into, and the same criminals who staged the previous fake chemical weapon's attacks, created this latest chemical weapon's attack which just destroyed American and Russian relations and moved America into the next world war.

If Donald Trump is innocent in this, he is believing the same Pissgate File which image Obama disseminated all through the US regime in the hands of Andrew McCabe, James Comey and John Brennan. Donald Trump is engaged in the exact same fake intelligence with even worse consequences.

It is time President Trump begin questioning his sources of misinformation as he is trusting ISIS, al Qaeda an the same MI6 which manufactured the Pissgate dossier.

That is the reality of the Syrian Chemical Weapon Theater.