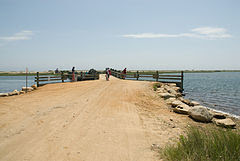 I am not a Mark Steyn learning history from watching Irish remakes of Teddy Kennedy's celebration of walking on the moon by getting involved in the destruction of his political career at Chappaquiddick.

For those who are unfamiliar or do not care, a Bobby Kennedy volunteer died that night in drowning in Teddy Kennedy's mother's car and Teddy did not report the incident as he apparently lost his mind thinking the woman somehow got out of the car as he did.

In reading the following time line on Wiki, what struck me as an investigator was what this all looked like and the Lame Cherry will do a short run on this and not make a long story of it.

Kennedy left a party he was hosting for young women at 11:15 pm. Kennedy said they were going back to their rooms  via the ferry. The woman did not tell anyone she was leaving and left her purse and keys.
That means that Kopechne intended to return.

An hour later, police officer Christopher Look noted this car having been on the cemetery road. The officer thought the couple was lost and approached the car. The car sped away on the Dike Road which was a dirt road compared to the other road.

An hour had elapsed, Kennedy was well aware of the routes, and Kopechne had been over this route. In forensic psychology, Teddy Kennedy asked Kopechne to accompany him for sex, hence the isolated location and the speeding away from the officer.
As Kennedy approached the bridge, he braked and then drove off the bridge. Again the psychology of this points to that Teddy Kennedy was driving around in his mum's car, and Kopechne was giving him a lengthy oral sex treatment.
It is concluded that Kennedy was distracted by the oral abilities of  Kopechne just before the bridge or he came as he went over the bridge, and this distraction caused him to drive off the bridge.
The car rolled as it hit the water. It will be assumed that Kopechne was stunned at impact and perhaps was drinking, and she died there.
No information is available if Kennedy opened the door to escape or went out a window. If he opened the door then he would have let the oxygen out and Kopechne would have drown immediately.

The psychology of this is, Teddy Kennedy's first and last impulse was to save himself, as he abandoned the car twice.

The above would fit with the cover up, Kennedy's actions, his losing it in the vain hope she was still alive and escaped the car, and considered reporting that Kopechne was driving the car alone, as this was about driving around in his mother's car and getting a blow job for over an hour.

Kennedy testified that he left the party at "approximately 11:15 p.m." When he announced that he was about to leave, Kopechne told him "that she was desirous of leaving, if I would be kind enough to drop her back at her hotel." Kennedy then requested the keys to his mother's car from his chauffeur, Crimmins. Asked why he did not have his chauffeur drive them both, Kennedy explained that Crimmins and some other guests "were concluding their meal, enjoying the fellowship and it didn't appear to be necessary to require him to bring me back to Edgartown." Kopechne told no one that she was leaving with Kennedy, and left her purse and hotel key at the party.

Kennedy spotted in a remote location. 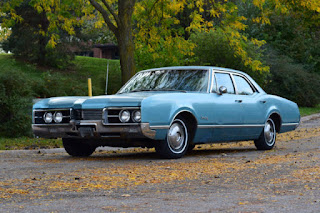 Deputy Sheriff Christopher "Huck" Look was working that night as a special police officer at the Edgartown regatta dance. At 12:30 a.m., Look left the dance, crossed over to Chappaquiddick in the yacht club's launch boat, got into his parked car, and drove toward his home, which was south of the Dike Bridge. He testified that between 12:30 and 12:45 a.m., he saw a dark car approaching the intersection of Dike Road. The car was driven by a man with a female passenger in the front seat. The car first drove onto the private Cemetery Road and stopped there. Thinking the occupants of the car might be lost, Look got out of his car and walked towards the other vehicle. When he was 25 to 30 feet (7.5 to 9 m) away, the car started backing towards him. When Look called out to offer his help, the car moved quickly eastward, towards the ocean, along Dike Road, leaving a cloud of dust


According to Kennedy's inquest testimony, he made a wrong turn onto Dike Road, which was an unlit dirt road that led eastward to Dike Bridge (also spelled Dyke Bridge). Dike Road was unpaved, but Kennedy, driving at "approximately twenty miles an hour [32 km/h]", took "no particular notice" of that fact, and did not realize that he was no longer headed toward the ferry landing. 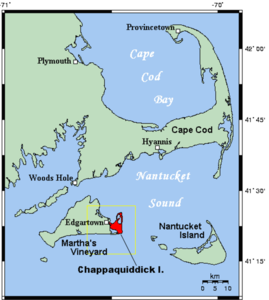 Dike Bridge (41.3734°N 70.4536°W) was a wooden structure that at the time was not protected by a guardrail and was angled obliquely to the road. A fraction of a second before he reached the bridge, Kennedy applied his brakes and then drove over the south edge of the bridge. The car plunged into tide-swept Poucha Pond (there is a channel) and came to rest, upside down, underwater. Kennedy later stated that he was able to swim free of the vehicle, but Kopechne was not.


According to Kennedy's testimony, Gargan and the party co-host Paul Markham returned to the waterway with him to try to rescue Kopechne. Both of the other men also tried multiple times to dive into the water to rescue Kopechne. Kennedy testified that their efforts to rescue Kopechne failed, and Gargan and Markham drove with him to the ferry landing. Both men insisted multiple times that the crash had to be reported to the authorities. According to Markham's testimony, Kennedy was sobbing and on the verge of becoming crazed

Back at his hotel, Kennedy complained at 2:55 a.m. to the hotel owner that he had been awakened by a noisy party. By 7:30 a.m., he was talking "casually" to the winner of the previous day's sailing race and gave no indication that anything was amiss. At 8:00 a.m., Gargan and Markham joined Kennedy at his hotel where they had a "heated conversation." According to Kennedy's testimony, the two men asked why he had not reported the crash. Kennedy responded by telling them "about my own thoughts and feelings as I swam across that channel... that somehow when they arrived in the morning that they were going to say that Mary Jo was still alive." The three men subsequently crossed back to Chappaquiddick Island on the ferry, where Kennedy made a series of telephone calls from a pay telephone near the ferry crossing. He made the phone calls to his friends for advice. Again, Kennedy did not report the crash to authorities