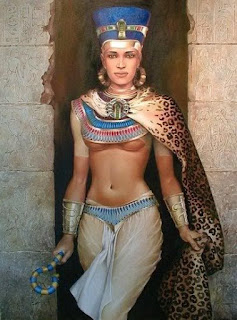 The Holy Ghost spoke to me twice in Bible readings about Egypt. Egypt sometimes refers to the collective of the depravity of the world, but I think in this quote from Jeremiah, it portends a coming End Times route of of the Egyptians by the anti Christ.

Europe, before the Battle of Armageddon, will battle and fight Egypt in North Africa, and defeat the Egyptians.
There are telling consequences in all of this, as the United States ripped Egypt apart under Birther Hussein and put Egypt back together under Donald Trump as a regional power. For the anti Christ to conquer Egypt, it will mean the United States will have ceased to have been any protector or help to Egypt or the region.

What caught my attention in this Burden of Egypt, recorded in Jeremiah the Prophet was this latter verse.

To set the order of battle up in this, Babylon had previously defeated the first world power in Nimrod's founded Assyria of Nineveh. A group then appeared of Babylonians and Medes, who struck out under Nebuchadnezzar for the stronghold in Syria or Aram by the River Euphrates, Carcamish, which was under Egyptian control as was most of the Holy Land.

Egypt was the global power and what follows is very much a shadow of Armageddon. For King Josiah of Jerusalem in order to gain liberty for Judah, went out to the Plains of Sharon, where he delayed the Egyptian army at Megiddo. That is Har Megiddo or Armageddon in Greek, In the battle Josiah was slain and the Egyptians moved on to first lay siege to Harran and then moved back to Carcamish, where Prince Nebuchadnezzar had crossed the Euphrates river with his army and there he fought the Egyptians to a massive defeat. 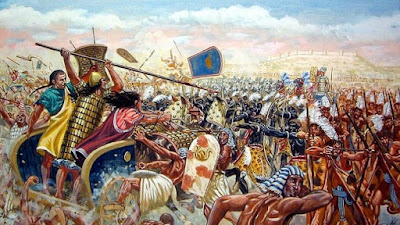 Now is what caught my attention in Jeremiah the Prophet, for he records by the Inspiration of the Holy Ghost a detailed account of the Egyptian forces. Egypt arrayed:


In one account before Cachemish, the Babylonians met the Egyptian army at Harran and there battled it for 10 days where the Egyptians retreated. The point in this is, Egypt was a world power with the finest military in the world, in all of the advanced warfare. They could deploy hundreds of miles, so were well quartermastered. They had blitzkrieg in lightning warfare, in cavalry, chariots and a strong armoured corp of heavy shields and spears to back up the chariots or by brute force attack or defend it's position, with arrows which could protect any such attack on it's shielded ranks from distance by mowing down an enemy.

In noting the above, it is no surprise that Josiah was killed in battle by an archer, as Egypt was well manned as were the Assyrians well skilled in the art of warfare, as their children are the modern Germans.

Yet we read in the chronicles that Nebuchadnezzer had a military which could cross rivers, deploy, was well quartermastered, and was not only capable of accepting Egyptian firepower, but could withstand it for days, and then smash the enemy with brute force.  It was this army which appeared at Carcamish, and in this Nebuchadnezzar crossed below the Egyptian position on the Euphrates River, cutting off their retreat, and forced Pharaoh Necho II to battle.

For what took place at Carcamish, the Babylonian Mede Soldier therefore had to have the qualities of stamina and absolute discipline, as war in infantry in massed situations was a pushing struggle as much as a hacking struggle where people were crushed in the ranks in the mauling which took place.
Nebuchadnezzar is concluded was a brilliant tactical officer. In two world armies of Assyria and Egypt, he smashed them both and more importantly had an army left to rule the world.

It would appear that in Egypt the fighting was hard, as it was a fixed line of defense in Egypt of terrain which the Babylonian ability to maneuver and brute force pummeling was not as effective as open plains battle where Babylonian strength and stamina could overcome the Egyptian mobility and lighter armaments.
In short for a modern explanation, German lightning warfare and armor was lighter than Soviet armor and it's hordes on the Russian front of World War II, so the Germans were driven back. The Germans though bloodied the Russians severely at Berlin with inflicting over 300,000 casualties in a near disaster for the Red Army.

That is what seems to be the summation of Carcamish in Babylon had heavier forces which could maneuver, while Egypt had lighter forces which could not inflict enough damage on Babylonian Soldiers, who would wear an army down to an absolute slaughter.
The Egypians could dominate less mobile larger armies as Assyria and smaller and lighter armies of Judah, but it could not have sustained warfare against the Babylonian mechanized heavy military corps.

It is evident that the iron of Assyria,  met the sinewy metal of the Babylonian Soldier and the combination was blunt force trauma to anything in it's path.  Combine that with a tactical leader with divine strategy and this is a world empire military. 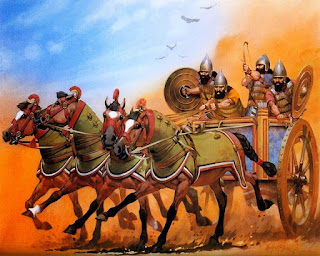 Egypt according to Scripture will receive another death blow in the End Times. Her American armaments will not suffice against the European technology and ability, as none of these well armed states will prove capable against this beast. arisen as they could not withstand Rome.

This is coming and a great deal can be learned from historical example, as the same battlefields will become active again in  the near future.


Until that time, Nuff Said