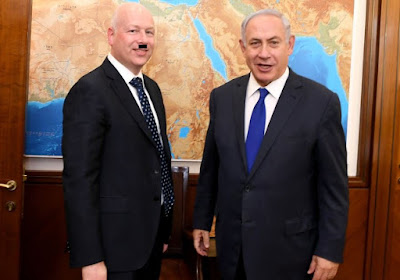 You may remember that this was to be the summer of Jared Kushner Peace in our time in the Middle East, but the plan was never released.......well part of it was, and it was a ponzi scheme where Kushner construction associates were going to get the jobs, and the rest of the Mideast said, "THIS SUCKS" and that was it for the rest of the deal.

Of course Benjamin Netanyahu was blamed for this in not being able to form a government as the Mosaad  kept leaking what a crook he was. Now with elections coming up in the Jewish state, new manifestations are appearing in Trump Peace in the Bill Ayers who wrote this for Jared Kushner, in Jason Greenblatt has bailed on Donald Trump and left the building.

You may remember Greenblatt swooning over Sebastian Kurz, in writing policy where Americans would be shipped off the Hague to stand trial for "crimes against Jews", as this blog reported. How it was legal to ship innocent Americans who had broken no laws in Europe, to be extradited to the European Gulag, is something Trumpian, but that is what Jason Greenblatt was tweeting............while working on peace in the Mideast which looked like a money laundering scheme.

https://lamecherry.blogspot.com/2018_12_12_archive.html
Greenblatt should be fired and President Trump must through Jason Miller, craft a statement affirming the US Constitution, citizen rights, over European overreach, and for the confirming of the borders of Muslim lands as established now and the right of those peoples to not be subject to exiling or holocaust.

The Kushner's were in meltdown over losing Greenblatt, as Ivanka off the fat farm tweeted this.


White House adviser Ivanka Trump said in a statement that “the kindness and unique talents of Jason Greenblatt, a dear friend and colleague, will be missed in the White House. We know he will continue to impact the world for the better.”

Senior White House adviser Jared Kushner said that Greenblatt has done “a tremendous job leading the efforts to develop an economic and political vision for a long sought-after peace in the Middle East. His work has helped develop the relationships between Israel and its neighbors, as he is trusted and respected by all of the leaders throughout the region. He is a close friend and partner, and will continue to make a positive impact on the world.”

The thing in this is, if you are Black, would you trust the KKK to broker your Emancipation?  If you were a Jew, would you trust a Nazi with your travel papers? Where in this, when you have Benjamin Netanyahu sleeping in Jared's bed, Jarvanka as his and her Jews, Greenblatt is a Jew, and the US Ambassador to the Jewish state is a Jew, does it not occur to Donald Trump that the Muslims are not going to deal without Saudi bribes or the Philistines are going  to agree to anything with Jews writing their holocaust.

Should not someone have asked the Philistines of Gaza what it was they wanted, instead of writing a document up and telling them to sign it or else? Should not the settlers in the West Bank have been in on this, in knowing their homes will be protected and they will not end up like Gush Katiff? 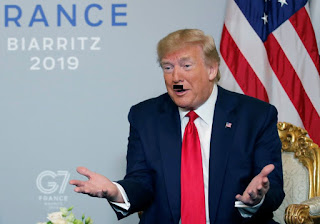 
Then into this is Donald Trump, meddling in the Jewish elections, and he is MEDDLING. He began this in April in trying to buy the Jewish vote for Netanyahu in giving away Syrian land to the Jews in the Golan.
That is like Russia giving Texas back to Mexico, Syria did not appreciate it, nor would Americans.

In the run-up to the election in April, Trump recognized Israel’s sovereignty over the Golan Heights, a move widely considered as designed to give a boost to Netanyahu on Election Day.


Then the President has been trying to help Netanyahu in the coming elections in hinting at juicy portions the Jews can have their 30 pieces of silver for.


US President Donald Trump hinted on Monday that parts of his long-awaited Mideast peace plan may be released before the September 17 election, leading to some speculation that this may include elements of the plan that may help Prime Minister Benjamin Netanyahu at the polls.

Speaking on the sidelines of the G7 meeting in France before a meeting with Egyptian President Abdel al-Sisi, Trump said that while the entire plan would not be released before the election, “I think you may see what the deal is before the election.”
While the details of the 60-page plan are a carefully guarded secret, if the administration would say – for example – that under the plan Israel could extend sovereignty over the large settlement blocks, that is something that could conceivably help Netanyahu with certain parts of the electorate.


Prime Minister Netanyahu has a Jewish problem in the Mosaad. War makes fortunes for Mosaad. Peace makes them expendable. That is the Netanyahu paradigm, and Kushner with Greenblatt were not bribing the crooks of Mosaad, who have been running Wall Street money laundering software to solve Jewish financial problems.

Mosaad, and in trying to take out Sebastian Kurz, who has his own European dominance agenda, have pitted all these principles for failure, as failure means fortunes to Mosaad.

No one is making the point of reality in this as that is what this is all about. Jared Kushner is a slum lord who thought he could get the Saudi's to bankroll his ponzi scheme, but everyone in the Mideast realizes if conflict stops, the money stops coming in piles, and the money there is going to be subject to scrutiny as officials  will have time  to look at all the shady deals which are being laundered through the Mideast.

So Jason Greenblatt bailed on Donald Trump. The Kushners are gushing in tears of heavy labor in birthing peace with a monetary count. It all indicates that something not good  is in the offing, as the Jewish finance always knows first, as they are the ones who are making money on both sides.


Side Note* The factual reference is Donald Trump has mutated into a National Socialist, including now scanning for people who are unfit in gun control. The orange marmalade reference is from CBS television's depiction that Jews in Poland were selling crippled Jews to Nazi's for a jar of orange marmalade.