The Necessity of William Barr's Mindset on US Justice 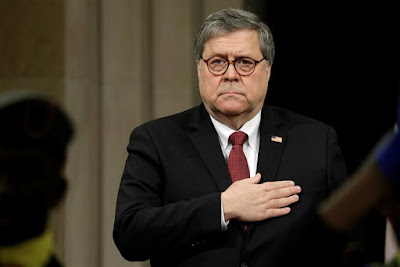 
In reading the fine reporting by Sara Carter and Sharyl Attkisson on statements by Attorney General William Barr and Senator Lindsey Graham on the abuses of the FBI in tactics employed against Donald Trump and his supporters, there is a linking thread to what both investigators have revealed, and it is the most chilling and troubling aspect of all of this coup against Donald Trump.

“Mr. Horowitz, The 17 irregularities that you found some of them are earth shattering, some of them should scare the hell out of all of us,


“This is not normal. Don’t judge the FBI and the Department of Justice by these characters. We’re better than this. Like many of you, I’ve worked with the FBI a lot of my time in government. I have a great respect for it. Director Wray, you’ve got a problem,”

What the epitaph in all of this is, is that there was not a conspiracy in the FBI to bring down Donald Trump and the American Government, as Senator Charles Schumer was bragging about in defending these abuses. In reading the published information on this, I would that there was a conspiracy in the FBI, as that is something which could be easily rectified.
WHAT THOUGH THE REPORTS STATE is that this abuse by the FBI was carried out, not for political affiliation, but because this is how the FBI' operates.

That statement is chilling, in the FBI of J Edgar Hoover is gone, in it's zealous nature of protecting the United States and Citizens. The FBI has always been zealous in going after gangsters. They had limits though in even Al Capone of Chicago was a crime lord the FBI would not frame, instead they changed the laws in order to indict him on taxes.

That is the point in this, the Hoover FBI is gone. What is now the FBI is a group which had political officers in high places, who are now removed, but they would have stretched the law, lied to the courts and framed someone like Al Capone, as that is what they did to Michael Flynn, Carter Page and other Trump associates.
Page was an FBI asset cooperating with the FBI, and they still abused the law in this investigation.

Awhile back I quoted a Professor who stated the FBI had a CIA disease, in the FBI manufactured intelligence when it had none, just as the CIA did against the Soviets, for their in house political objectives.

In all of this it is self evident that Barack Hussein Obama, Michelle Obama and Val-erie Jarrett wanted Hillary Clinton in power to keep the Obama crimes from being discovered. They deployed Susan Rice at NSA to be the political go between with CIA Director John Brennan, whose liaison was FBI Agent Peter Strzok, and with Samantha Power illegally unmasking innocent Americans, and foreign intelligence planting false information to the CIA and FBI, which began generating from Paul Singer and Bill Kristol, for Marco Rubio to be Jeb Bush's Vice President, and morphed to files created by the Hillary Clinton campaign, which became the MI6 Christopher Steele dossier, the mission was complete.

Attorney General Loretta Lynch stood down in there was no oversight in this, save DOJ counsel Stuart Evans who tried to stop this fraud from taking place, but the FBI in their counsel named Clinesmith fabricated evidence, lied to the courts and FISA Warrants were issued against the Trump campaign.

Once this took place, the FBI was unleashed, and that is what is troubling. The same zealous tactics that they use against hardened criminals and terrorists were unleashed on innocent Americans beginning with the entrapment of General Michael Flynn.
The FBI was not apparently manufacturing evidence, but it's political officers had accepted false data, and lied to the courts and then zealous agents were unleashed from the agency which Robert Mueller had created.
Mueller made a point of shuffling agents in and out of DC to put his mindset into them. This is the FBI that Mueller created and James Comey had zero oversight over as Comey fawned over Obama, and it appears that the entire leadership of the FBI in key positions were all democrats and Obama / Clinton supporters and no one else would step forward and put a stop to this in reporting to the Inspector General.

That is what is disturbing in all of this. As writing this blog, Homeland appeared here to interview me, over a post which I located again from August 2016, which states the basis of it was from a remote viewer named Dick Allgire. He was not interviewed nor was Jeff Rense who broadcast the story. Instead the NY FBI ordered Homeland to move on this wild goose chase. Homeland has very well trained agents. They knew this was nothing, but had to follow up. These same tactics though were unleashed on the Trump campaign in his supporters, and in this the FBI was treating innocent people as Russian agents, which none of these people were.

Remember in this the golden thread of British and American Law that all are innocent until proven guilty in court. The FBI is not a Jury, but the FBI is responsible or is supposed to be as all law enforcement to investigate their employers as that is who Americans are, with an unbiased and professional mindset which never deviates that unless evidence is found, that people are innocent.

In this when the FBI was unleashed, it never looked back or stopped. When evidence appeared which proved this was a fraud, the FBI leadership ignored it, and either the agents involved in the investigation had that withheld from them or they were on a seek and destroy mode, none of these agents did what they were supposed to do and let the case end.
Peter Strzok texted that this information against Donald Trump had no standing. He was though part of the political officers and it was his responsibility to place that into the file that the FBI should stand down.

This though is still taking place in the FBI as in Oklahoma a law student posted a flier "It's ok to be White" and from that the local police went Mosaad in hunting the student down, and the police used FBI Counter Terrorism to track this innocent student down, for which he was expelled from school, in having all of his rights violated.

Senator Graham is correct in the FBI has a problem, but Attorney General Barr in his statements is incomplete as the people in the FBI who engaged in the Trump investigation are not gone, they are still working in Oklahoma destroying American lives. The FBI should have told the Oklahoma police that this kid was not a threat and to drop it. Instead another lynching took place and this is the reality in the FBI must have oversight which rids from it's mindset this CIA disease and this Mosaad training that every American is a criminal without rights and needs to be destroyed.

This is the problem in Director Wray in all of this has been stonewalling Congress, as it appears the FBI was searching for a mole or cell inside the American government, and was using that issue in linking it to Donald Trump to engage in the abuses the FBI carried out against innocent people.

It is a point, that you can not unlearn a mind in what the FBI was conditioned. The entire police force in America is based upon intimidation and not protect and serve. All those psychological profile applications which weed people out  are weeding people in who have proven they simply are bots who have no off switch. When Donald Trump was found innocent, the FBI should have closed the file, instead it went into overdrive in abuses of power from political officers, and they unleashed rank and file who had one mission, and that was arrests, not the Truth.

What is the threat in this, and it was designed by someone to be this way, is the FBI leadership can flip internal switches for investigations, and once that takes place the agents deployed go on search and destroy as Donald Trump experienced. There simply is not a fix in this when the system is set up to arrest people, instead of investigate.

Do I believe William Barr could create an atmosphere in the FBI which would be professional? Yes, but he is not in the FBI and is setting a standard at the DOJ, as John Durham's team is a professional group, unlike the political trolls that protector of America, Robert Mueller assembled to investigate the President in a political operation.


All of this is a serious problem and no one is advocating any solutions. Throwing all of these corrupt FBI officials into prison is not going to end this, as the FBI has a self protection inner environment. Director Wray correctly removed problem agents, but he then circled the wagons and has been protecting his house, when that is the last thing which should have been done to gain the trust of Americans again.

The Obama Inc had zero oversight from Congress or the DOJ. It was lawless and Obama abused constitutional law, and his followers engaged in the same unConstitutional misbehavior. That mindset remains and America has been injured by it in 4 years of investigations of Donald Trump and now these same culpable players are involved in political impeachment to overturn the 2016 AD in the year of our Lord elections.

With a Trump second term, William Barr has stopped parts of this abuse of power in the FBI, but he is not going to in just these outliers fix what is wrong with the FBI and American law enforcement as the system mindset has been corrupted.

Until the Attorney General imprints his mindet on US Justice, the threat will remain.

In video appearances on NBC News and at Wall Street Journal’s “CEO Council,” Attorney General Barr provided the same basic information and views about the U.S. intelligence community’s actions against the Trump campaign in 2016 and 2017. A criminal investigation is underway and being led by U.S. Attorney John Durham.Barr was motivated to make the public statements, he explained, by misreporting and confusion surrounding Justice Department Inspector General Michael Horowitz’s report issued on Monday. It found serious government surveillance abuses but no evidence of political bias on the part of the offending FBI officials and agents.Below are 24 points Barr felt the need to make after the release of the Horowitz report. (All of the information is attributed to Barr.)1. Don’t expect Durham’s findings to be announced before late Spring or Summer 2020.