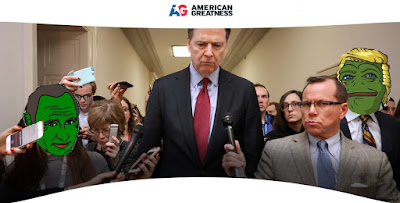 I always say, "Trust a woman with large comforting breasts", and you know I am right. Has Mae West ever let you down? Has Raquel Welch ever led you wrong? Has Dolly Parton ever lied to you?

See I have a theory that large breasts are really truth tellers. God only gives them to honest women.

The thing though there is a difference between honesty and even truth and being right.

Julie Kelly for example is an honest woman who tells the truth, and you know this by her large comforting breasts. The thing is she wrote this article:

His only loyalty is to himself, at the expense of the country. 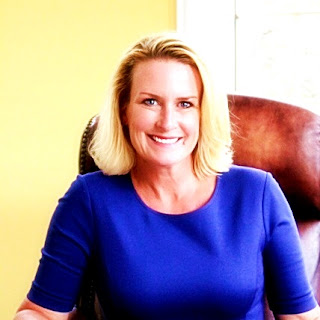 The article can be encapsulated in these few sentences which are honest and truthful.


Comey took some sort of sick pleasure in gaslighting an already dangerously divided electorate after the shocking victory of a man who not only is despised by his former boss, Barack Obama, but by Comey himself, his top deputies in the FBI, and his cronies in the Justice Department, State Department, and CIA.
Comey betrayed the long-standing trust the American people have in our nation’s most powerful law enforcement agency to feed his insatiable ego. He disguised his megalomania as patriotism.


As someone who was assaulted, abused, soul raped, tortured etc... in captivity, it became a science of survival for me to study all animal behaviors, primates included. From this I pioneered forensic psychology and in the examination of James Comey this blog has published a number of articles on James Comey in his delusions, grandeur, mania, paranoia and psychopathy.

James Comey by his actions under duress, manifested a Messiah Complex.

https://lamecherry.blogspot.com/2019/05/the-disturbing-messiah-complex-of-james.html
May 2, 2019From a psychological assessment, James Comey is not sane. He has a Messiah Complex, a Trump obsession, and a sociopathic reality where his actions are legal, even when criminal, and all those who disagree with his Sermon on the Mount, are possessed like Judas by satan, in being lost forever to the hell fires of Donald Trump.

Lame Cherry: Comey for the Trees

https://lamecherry.blogspot.com/2019/05/comey-for-trees.html
May 15, 2019Who would have ever thought that having the initials, JC, like Jesus Christ, that this would develop a Messiah Complex in a rather Jock Delinquent psychosis of former FBI Director James Comey, and yet it has, as Comey seems to be setting the stage for his defense of Extraordinary Madness in his being the lynch pin the Coup against President Donald Trump.

James Comey is fascinating, because in a room of messiah Obama who Comey fawned over as Comey and the wife, paraded between the pews at church as christians, who was the greater messiah, Comey or Obama when the two met?

As I stated Comey fascinates me, for he is interesting to a point. This was the protege of protector of America, Robert Mueller, who remade the FBI in Mueller's image. The faces we saw before us in now Director Christopher Wray and former Director James Comey, were chosen by Mueller, conditioned by Mueller and trained by Mueller.
These were Bush folk, and yet like the Bush family, they became Hillary Clinton and Barack Obama folk.
Robert Mueller had a scorched earth flame when it came to protecting the FBI, covering up problems and obliterating rights of those he targeted. You will notice that James Comey had the same attributes, but his flame was more of the glow of the popular girls clique from high school.

From what James Comey exhibited,  Comey did not take pleasure in his actions, nor did his delusions manifest as patriotism. In every law James Comey broke in stealing FBI files, leaking files, tampering with investigations, he did not exhibit a glorification of himself. Instead James Comey is a simpleton, and it can be best summed up in James Comey was his Obama's keeper.

One has to view James Comey as these fraud christians or Chris Matthews leg tinglers. See these purification racists, are the same type that created the fiction that a Black architect drew the plans for Washington DC. White people did the drawing and in order to promote Black people, gave the man credit.
These purification racists had DESIGNED Barack Obama, he was their designer negro. Obama though was a figurehead, an empty suit, and his confederates knew this, and they had a great deal invested in this, as they knew Obama could not do it alone. For James Comey in his christian dogma, Barack Obama was his pet.
If you ever watch this segment of pasty white America, they treat all coloured peoples as pets, like dogs. They smile at them, talk at them, pet them and treat them like something out of the kennel.

With Donald Trump displacing the most unwanted Jeb! Bush, James Comey took it upon himself, to be a part of the Obama praetorian guardians. He was not going to allow the Department of Justice in Attorney General Loretta Lynch be allowed to enforce the law in indicting Hillary Clinton, which would elect Donald Trump. No, James Comey would discern and create a new interpretation of the law in, Comey's Law, Hillary Clinton's crimes she committed were not crimes, because James Comey discerned her criminal actions, were not the intent of her heart. None of this legal or the law, but it is what Comey constructed. It was at this point that James Comey became Obama's messianic protector, and made the Director's Office at FBI, into the pulpit of the FBI, in messiah Comey judged Hillary Clinton innocent in order to protect that poor Negro in Obama who needed messiah Comey's great white hope to save Obama.

Once Comey took the step to Jesus Comey, Comey began walking on the waters to trouble them for Donald Trump, because this messiah, in order to save Obama, now had to create a Judas named Donald Trump, and began engaging in leaps and bounds. Comey knew the evidence against Donald Trump was fraudulent. Comey knew that this fraudulent intelligence was manufactured, but with his wink and a nod, he took the fraudulent dossier and hid behind the law, as it was serious, so he chose to investigate as the excuse for the reality, that he was moving to keep Donald Trump from being elected.

The next step for Jesus Comey was to trouble the waters even more for Donald Trump, to interrupt the Trump Presidency, in order to hide the malfeasance that Comey had engaged in, and what Comey knew led direct election interference from Barack Hussein Obama, Michelle Obama, Val-erie Jarrett, John Brennan, James Clapper and John McCain. This interruption became the entrapment of Trump associates and the spying on of Donald Trump.
Jesus Comey appears to have fully intended to bring down Donald Trump as his Obama's keeper. As James Comey is a farsighted enough simpleton, as his leaking of confidential files to the press in order to protect himself, Comey fully understood by his lack of loyalty, candor and resisting President Trump would get him fired, and that is what happened.

This is where the last manifestation of Jesus Comey appeared in James Comey wandering around the wilderness for 40 days and nights. The problem being in rural America, is that there were already Americans there, but Comey was posting pictures of him on deserted roads and in forests, attempting to portray himself as the messiah at peace and above it all.
Where Comey's wife had been abandoned to as he made this sojourn was never disclosed, but Comey as the messiah in the wilderness of Americans, attempted to place himself above it all. His crimes were not crimes, because Comey's motives were protecting America, from Americans.

Whatever the demons are in James Comey and his ilk from nigger knockin' to fag bashing, that they had to gain penance for, those other Americans, who refused to vote for Obama and Clinton over their socialist and communist policies, but kept reminding James Comey of his past sins and why he voted for Obama over the Constitution, and why these zealots would do anything to preserve that election theft in 2008 and 2012 AD in the year of our Lord.

As stated, James Comey is a simpleton, a recovering racist and homophobe, risen from the pew, not wanting to be reminded of his past, and breaking every law and bringing down the American Government to hide his sins.

James Comey is pathetic as his Obama's keeper.  As the cartel with greater agendas and greater intelligence, had other reasoning in the framing of Donald Trump, it is projected that they knew the psychological profile of James Comey, as much as Obama in why that Birther was chosen. Their operations would know that Comey would exhibit messiah complex as a perfect troll in this, who would act out exactly as he did.
Comey does not appear to be a conspirator, but a lone wolf unto himself, who is quite comical and preposterous, in the image of Obama and Comey meeting, where Obama thought he was being adored, but Comey was just petting his pet who was not up to the job of saving Comey from his sins.

I still like the maxim of large comforting breasts being honest and truthful. 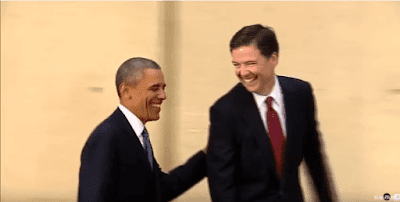 The Obama's Administration's FISA Abuse Is a Massive Scandal

Perhaps if Democrats would momentarily shelve their obsession with Donald Trump, they'd comprehend the stagg…