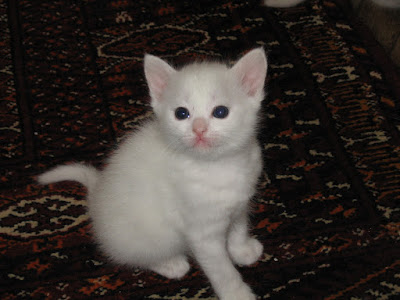 
So we got this cat, brother and sister, the two most purring, adorable cats on the planet. Absolutely zero sense in running toward vehicles and other stupid things.

So the male, he has been following me around non stop since he could about walk. Not kidding, I didnt't think a little kitty could walk that far, but he follows me around to the barn, doing chores, gets a drink of water from the pail, noses around, I take off and he follows me back to the house.

So we are putting in the cattle the other day, and there he is again. So annoyed I picked him up, as I have been doing that in carrying him back, and got his head hanging down so he is upside down. I figure, "Ok cat, not abusing you, but you are going to get annoyed too".

So he struggles for a bit, but I keep holding him and petting him, and then just 20 seconds into this, he stops, just hangs there, as I walk along, and the cat loves being hung upside down and petted. He is purring as usual and being even more the lovable cat he is. There is absolutely nothing you can do to this cat which he does not purr over and just love. He looks up at you with this little eyes, puts his little feet on you, and just wants to be held and now he wants to be petted upside down, hanging there like a rag doll, just watching the world go by with his purring cat delight.

I probably should be more like this cat as nothing bothers him. He gets pounded by other cats in play and he just takes it. I just can't believe he loves hanging upside down and being petted. I have been defeated and vanquished by a cat.