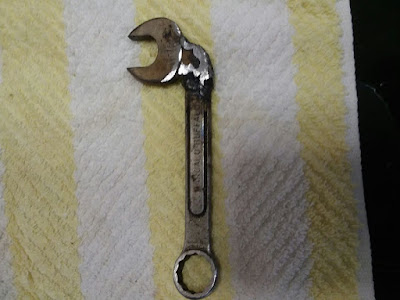 In dealing with the "buy" of a Farmall Super MTA, which was owned by a geez who had not run it in years, it required more carburetor fixing than I cared to deal with. Fortunately I have a relative who is a genius at that so, it was taken to him, and he sand blasted it, and fixed it, complete with asbestos packing, as the old needle valve was not good on the threads. I did not ask as I did not want to know, as I just wanted it to keep running once it started.

The problem in Farmalls of this vintage is the carburetor connects to the manifold by two bolts attached to the manifold, and the one is on the back side of this manifold. It is a piss poor design and in that design you can not get a wrench on the thing. It did not help that our's was gunked with grease in the threads, so what I had was a small vice grip and at one quarter a turn when it did not slip off and round off the nut, we worked an hour on it, to get that thing loose.

Talking to my genius relative, he said he had a wrench for it, and was motioning with his fingers so I gathered it was a step down type wrench set up, as this is a shitty place to try and get a wrench into as it is confined, tight and you have to get it on or it is on, and when it is not close, it is completely not going to go on.

So looking online for wrenches, I discovered sets from 50 to a thousand dollars. I found single wrenches for like 16 bucks. As this is a 9/16th's wrench, that is a bit steep. One guy in a thread said to just make one out of a cheap wrench. Another guy said he used stubby wrenches, and I was frowning on the stubby as I did not know if it would work as this is just a few inches of space.

So while grinding off burrs on a digger, using an impact wrench to twist the burrs off, I got down about noon, and wet to work welding. I had to weld a depth setting arm on a plough that I broke somehow long ago, and had to weld a crow bar that I got from JYG, and then there was this wrench.

As wicked one, had not paid me, nor his Big Hoss son, I collect interest in things I need, and wicked one had a bunch of sale wrenches in a box, and I sorted through, found a chromium steel out of New York and wondered what this would turn out like and how to make it, as should it be a 75 or 90 degree. I think Snap On had 90 degree angles, so I cut the open end off, leaving about an inch.............I do not measure things, mark things, just eyeball and go at it.

I was surprised how easily the hand grinder beheaded that wrench, as some of those bolts and burrs I was working on were like cutting diamonds and ate grinder wheels.

So anyway, I grown a flat surface on the main body of the wrench. secured it to a bar of metal with a vice grip and spot welded the head back on, at 90 degrees. Welded all the points, did not touch it as it was very hot, and went onto the crowbar and plough handle, came back and with gloves on, ground the high spots off and made it look pretty and not a wrench to slice my hand open.

My relative when we got there was going to let me borrow his wrench. It was an exact duplicate of what I had just made. He laughed when I told him I had just welded one up that morning.

The wrench worked very well. Tightened even the rounded burr down secure enough and as TL says, "We are keeping that wrench so we do not lose it."

For as expensive as these angle wrenches are, and everywhere I looked, I heard, "We used to have lots of them", I have a plan to Harbor Freight some of their cheap sets of normal wrenches, cut the heads off, and weld them all on 90 degrees, so I will have a complete set which I will never use, but it is ridiculous how expensive they are, and it was so easy to make the wrench above, there is no reason to not just manufacture it myself.

I see they have old carb wrench sets, for 25 bucks, which I might just purchase, as dinking with small stuff has it's limits with an arc welder. but the bigger stuff, I can amp up to 100 amps, and this chromium steel just melts really like butter. I was most pleased that metal that hard flowed so well. The old plough cast iron had to turn up to 115 amps as the bead just sat on top, and for me, I have to get down into that metal and make it melt and bind with the bead. That is how you get things to hold.

So for people who are stuck with shitty old tractors and wondering what Rachel Gingel is gingling about in how easy things are, as she left out the part about getting that carb off a Farmall, here is the solution. Granted, if you are not a welder, that is a not the easy and cheap fix. My welder is from one my old man bought in his early days, an old Lincoln which I love and adore. I can work miracles with that arc welder and I prefer it.

This is the solution though for this carb problem. International changed the bolts to north south, instead of east west in the design so you can use any wrench for them, but for the older letter editions, and I'm guessing the 300 to 450 class, you need a wrench like this, or a small vice grip. I would have tried a small crescent as wicked had one, but it would not open up for 9/16'ths inch, was about a half inch I think at the max.

So on this April 22nd that is part of what  I was up to, and even if you do not have interest in this knowledge, I will sooner or later see referring search words for Farmall, Carburetor,  Wrench, Angle Wrench, and a few people will filter through and get a blank expression on their face as they find the solution to their problem and then sigh in having to fix it just like my relative did in making his own wrench.
I really like Jerry. He is a genius with magnetos, carbs, starters, electricity, engines, motors........he could fix a flying saucer I think if one ever landed.

That old wrench looks almost professional. God does good work through me.