Be Aware and Beware 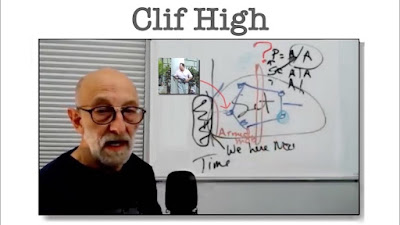 The Lame Cherry adores the intellect of Clif High, but the discourse he is espousing is pure Battlestar Gallactica, which the creator Glenn Larson built on Mormon satanology.

The narratives is that you are Star Children or more to the point, you ate bananas, your own turds, lived in a cave, and some alien geniuses came here and injected you with a vax, and you turned into humans.

This will be the great deception which the Bible speaks of. Jesus will be some spaceman, Religion will be transformed. You will get a test which reveals you have this higher level of DNA and you will be pleased and others will be required to get the vax.

People are not GMO critters as Mr. High has spoken of. He speaks of the soul, but he trends of these aliens which are not aliens. What this is, is demons. demons who have provided technology to humans, hence the corruption before the Flood.   There is not anywhere which states that satan as Lucifer could have built things on the moon or Mars. I state this for those who are into the buildings on other planets.

This Great Deception is to divest you of God, the Light in you, to replace your connecting with God to a false immortality, or perpetual slavery for those who have willed to choose this false religion.

There will be shock and awe in this. Holodomor, is a mass famine. Stress and prions will create a zombie class which will follow along in this to force submission.

This is not having too many humans, this is about too many competitors. Meaning the 1% will have problems with these competitors and two immortals are a big problem when they disagree. demons motives are to destroy God's Promise by ending humanity before they are sent to the Lake of Fire. demons in this are to just anti God, so what God wills they move against.

Those who have taken this space alien route like image Obama, have gained the forbidden knowledge and are using it to eliminate Protestant Christians. Just watch the above link and just be aware of what Clif High is stating. Just catalogue the information. Do not follow it or base your life on it. Mr. High is assimilating information and creating logical projections. This is important, but if you believe this is aliens fighting humans on the moon, this is incorrect, as the original disclosure was that we were going to be told in the last phase that dangerous aliens were out there, and we would have to unite and fight.

A united world, that is a one world order, and all from a common threat, as engineered famines, shortages, bio terror, and whatever as you will see some super humans doing things you can not do.

Just be aware as Clif High is a treasure, but never take Christ out of this time line or content, as your salvation is what is being impeded for a counter or anti Chirst programme.