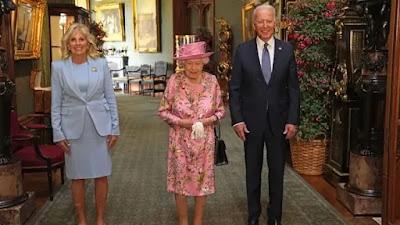 The takeaways from Biden Abroad  can be summed up as a reinforcement of what Pedo Joe Biden was before the G7, but on an international scale.

We learned more from the Europeans and Russians than we did from Biden. Europeans left the message of Biden is the twilights last gleaming of America and they are enjoying it. For Russia, the restraint which President Vladimir Putin exhibited again, reveals that Putin is the Asian Tiger not curious, but patient in the prey. Putin knows the 1% is bringing America down, and all of this is coming to the Germans.

Russia is awaiting for Biden and his Obama germ clients to mix things up last summer, so Russia will inherit the Slavic earth. Yes it is all playing both ends against the middle, expecting the other chump to get the torch, but the 300 pound senile gorilla in the room that all are biding their time for.
Justin Trudeau is banking on his Obama 1% insider script that Kamala Harris will be President in December 2022 as the 1% humilates Biden in a Republican handover of Congress.

The G7 changed nothing. Biden was installed to be a puppet. In reverse speech from David John Oates on Rense, Biden has paid for terror from the vax and to promote the vax terror to maintain control. Everyone at the G7 knows Joe Biden is a fading star, no matter how reanimated he is. He is a brain damaged, Parkinsons, drugged old man. He can not remember information, he wanders away from security groups to enter cafes to be rescued by his wife. Everyone laughs at Biden, as they know he is backed by the 1% who they take serious, but Biden is not taken serious.

None of this means that Joe Biden is going to go quietly into the night, nor is Joe Biden in his Delaware mafia content as Resident, to and his legacy over to Obama's Kamala Harris legacy.  Biden was stuck with Harris as part of election theft. Biden is no longer saddled with that as the election has already been stolen. One reason the recounts are being allowed to put a leash on Joe Biden.
The fact is though that Biden in his staff has deliberately tried to sabotage Harris on the border if not worse as the border is as dangerous place. This is Susan Rice and the Chief of Staff who agreed to this in sending out Harris to the Midwest and South, which again will fail in the vax and be a dangerous situation for this woman who Joe Biden wants gone.

Joe Biden is backed by the 1%, even as others are spreading propaganda to get him out of the White House. He is in command, but everyone is not looking at him like Ronald Reagan in being around to reset the world in freeing it. Instead the Russians are wisely being patient. China  lurches between belligerence to the age old manifestation that China is a disaster in China, but in the outside world it is the same disaster on a larger scale.

As this blog has explained, England is playing the same Great Game India of the 19th century. They got out of the EU for the purpose of emerging German domination with French and Italian failure, to begin another Russian German war in Europe, where London will rule the ruins.  The process of Duc Harry to inherit the American colony after China and the United States cripple each other. The small 1% immortals desire to rid themselves of the 99% majority as those numbers are too many competitors.

American traitors have allowed the Europeans to slaughter Americans in three massive wars. 1861. 1917 and 1945 thinned the Saxon population of the United States. All of the client states in this, understand the future of the United States is the ending of the civilization, it is the genocide, the erasure which image Obama grins over. Joe Biden is the Pedo Piper piping America over the edge of the cliff.

So Biden abroad is an epitaph  He is the happy ending for the Eurasians. This is what the 1% desired and Pedo Joe is their wet dream, and he sold his soul to get into the White House and the engineered famines in shutting off water in America to farms, the shutting down of oil production, the stagflation of Biden spending and massive price increases as Tel Aviv and Tehran are on the journey to nuclear war as all of this moving forward as designed.
There is a 99% blind spot in the media now as all information is being locked down.  The old Qanon and other Mockingbird scenarios are providing distracting narratives, and in the Untied States it is designed to end the connection of Americans and their government forever. Biden is a fiction which no one has a vested interest in.

The 1% upon Biden's return to the American gulag will have to initiate domestic and foreign events which are again to move this to 9 11 type transformations of America's place in this world.

How Joe and Jill Biden can grin like baboons as they do in an America which has absolutely nothing in common with Washington, Jefferson, Madison, Jackson, Lincoln. Roosevelt, Coolidge, Nixon, Reagain America. Bide is in control of a colony of the conglomerates, serving the 1% and keeping order with the police state hunting down the Citizenry.  This is why Russia is patient as Russia seeks to deal with the Germans as America under Biden becomes the twilight's last gleaming. China seeks a fortunate series of gifts from Bidencon of the East Pacific, and colonies of Australia an America. The Germanics seek to hitch the technological prowess of Europe to the resources of Russia in a neo Hitler greater Germany as  Putin puts forward Catherine the Great's Greater Russia, without the United States.

This is the assessment of Biden Abroad.