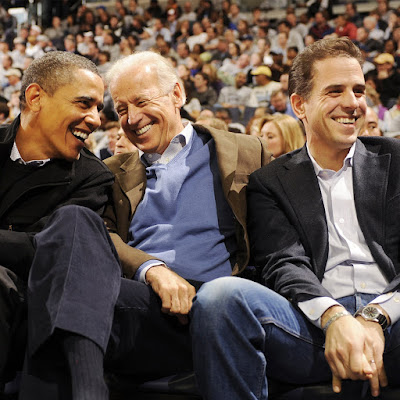 “Do I sound bitter? HELL, YEAH, I’M BITTER! I’m the stupid moron who fell for his false promises. I wasn’t naïve enough to think he’d be a transformative president. He told us he’d be plain vanilla. But I thought there was momentum behind his ethics promises. Boy was I stupid,

I find nothing to celebrate in a former Obama koolade sipper, coming to the realization that Pedo Joe Biden is a crook. The things which befuddle the mind are the praise for Obama in appointing an ethics czar. As the history of Obama reveals -

Obama and Holder misused the DOJ to cover up voter intimidation.

There was the matter of the abuse of power in the IRS sent out to target the Tea Party.

The little matter of the Boston Bombing which was a North Korean sting gone wrong.

Obama and Clinton had another little matter of the mass murder of Khadaffi's followers.

The silence over the mass murder of the Polish Government.

Barack Hussein Obama had no ethics. Where was his ethics czar when Obama was misusing executive power in using the FBI and CIA to frame Donald Trump and his supporters.
Comrade Obama was not qualified to be President, and yet there he was. To the more, the Obama supporter blaming Pedo Joe seems to have no problem with Kamala Harris being a birther too, another ethics violation.

Pedo Joe though suffers from Delaware Nepotism and the Delaware Mafia in Biden sold out to the highest bidders and appoints the advocates of those bidders.

I’m sorry, I know some folks don’t like hearing any criticism of him. But this royally sucks. I’m disgusted. A lot of us worked hard to tee him up to restore ethics to government and believed the promises. This is a a real “fuck you” to us—and government ethics. https://t.co/NRuc7hpOHi

The Lame Cherry's problem with the Trump failure is he was not ethically challenged, he simply set up an administration whose entire purpose was to destroy MAGA. Why liberals hated Trump is a mystery as he was Obama's 3rd term. Trump was a caretaker of the Obama order.

Trump suckered everyone on aborticide, which is still on the books and the fact is what RU 486 banning abortion is a mute point as women will still be killing millions of babies by poisoning them.

It is though a lovely list of the sins of Joe Biden, but where were democrats when Obama sold the office of Vice President to Pedo Joe, to target and make a political prisoner of a homosexual sex contact of Obama in Lawrence Sinclair. Talk about homophobe or attempted homocide that is Obama and Biden. Where was the problem with a homosexual being abused by the Obama and the Biden?

“EVEN THE F-ING HEAD OF PRESIDENTIAL PERSONNEL, WHO IS SUPPOSED TO BE KEEPING THEM HONEST, HAS A CHILD WHO’S A RECENT COLLEGE GRAD WORKING IN THE ADMINISTRATION,” Shaub raged. “AND THE SPOUSE OF THE WHITE HOUSE CHIEF OF STAFF, FOR CRYING OUT LOUD. This is ridiculous. What a f—ing failure.”

“The White House’s defense that they had the minimum qualifications is total BS. The issue isn’t whether they were qualified (some weren’t). It’s that a WH that promised diversity is giving these privileged white kids with connected mommies and daddies prime jobs over others!”

“And it only bans CASH or something substituting for an agreed upon payment. It does NOT ban an employer saying, ‘we normally make folks forfeit unvested stock options, but we’ll let you keep your millions in options because you’re going in the US govt.’ THAT’S ALLOWED!”

“Or how about this? Biden’s ethics pledge bans appointees working on matters involving former employers and clients. This month, the administration quietly issued guidance saying it doesn’t apply to clients that paid for speeches!!!! Yellen, for instance, made $7 million that way,” he continued. “The guidance also quietly said it doesn’t apply if a news channel paid you to appear on TV.

“And I don’t love having a milk lobbyist running USDA or a ‘strategic advisor’ (i.e., shadow lobbyist) running the State Department. Or the brother of Biden’s top WH advisor lobbying the Executive Office of the President through a firm the Biden appointee founded,”

“We’ve got a Raytheon board member leading DOD. We’ve got private equity fund people in the WH and at State,” he continued. “You’ve got corporate execs and big firm lawyers who represent corporations throughout. And personnel is policy.”

If anything, Joe Biden is an extension of Trump's wet dreams. Obama looted America for "green industry " fraud, and looting the treasury for European financiers. Biden's rewards are for the conglomerates of the 1%

The only people who do not like this system are those not benefiting from it.  It is like that Kelly Conway's husband. If Trump had Ivanka sucking his dick, George would have enjoyed working against MAGA with a smile.

I seem to not be able to whore this blog out to anyone for a few million dollars to praise all this corruption. I wonder how Michelle Malkin got her 30 pieces, as much as that troll that is the new Rush Limbaugh AKA Rush's Beard.

I have never looked if there is some data base for regime whores, like, Whores R US, as there must be something that exists as I have yet to hear of anyone receive a call like, "Hey we are looking for a corrupt bitch to sell out the administration for 1% policy.

It is the definition of insanity if anyone thinks that any of these people in power have any interest in America or you, and is going to be honest. It is all corrupt. There are though still people from January 6th and that includes FBI Director Christopher Wray who thinks that they can trust the system in place as it will work for them. Wray has the DIA picking his boogers and humiliating him over Chinamen defectors. That should be a message to all the FBI Agents that the DIA is pissing on the head guy, so they are just as golden shower prone.

I was speaking to two democrats who said they had given up on calling our Congressgenders. I agreed as they are all fraud and they do the 1% bidding.

If you think Biden Harris is going to make your life better or Trump DeSantis make your life MAGA, you are delusional. It is why I look to Jesus and am done with politics and all of this, as none of it interests me or matters. Representative Government ended with Ronald Reagan.

I would much rather have the big donations and go fishing as chimps learning that Biden is a crook is like learning that a politician is dishonest.