The Vax Magnet Tolls For Thee

Like most of you I cocked my head and frowned when I started seeing videos posted on chicken with magnets sticking to them. I had studied enough of vaxed people to see things sticking to them to conclude something was going on, but it did seem slight of hand to me.

That is why when Jeff Rense went out and did some investigative journalism in testing food with magnets, I was grateful, for the simple reason Jeff Rense has a number or pet peeves, but one thing you can count on is that to the best of his ability, he believes like Alex Jones in what he says, and they do not lie. 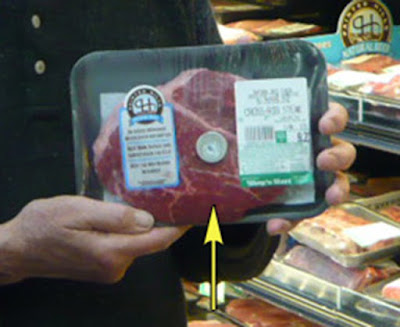 I would suggest you go to his link and review the photos he put up, as in his market, a cost saver market, the focus was beef, claimed to be American beef, was darker in color so it appeared to not have chemicals on it to keep it fresh for a month on the shelf, and it ran from steaks to hamburger.

As  I mentioned, we had just purchased as slab of beef for the 4th of July to BBQ, as I'm done with turkeys which cost more than a ham and I have had too much ham. I tested it last night and no magnets stuck to it.

I have not inquired on this, as TL and I are building a barbwire fence to keep people out in the meltdown and not just the cattle in. That is a great deal of hand labor as big donations would have purchased a tractor and a post hole digger to make things easy, but instead we did this for 3 days in the heat digging holes for wooden corner post as the rich sat on their asses again. That just stuns me in, in good times the rich won't donate because they are validated by money, but they get money from the government.......no donations then, stocks go up and no donations, and they get vaxed and money will not be worth jack or shit and they still won't donate. I now know what the Bible verse means in people hiding in caves and not giving Glory to God as the end has come. Money is an epitaph to hell as the world is going critical and the very information which could give the rich a chance the tight bastards still want it for free as I work my ass off.

I can tell you that beef ranchers are not getting the money in beef. That is the foreign owned packers who make the money. Ranchers are being driven out by HAARP drought and now this clever magnet meat. Instead of being vegan, Jeff Rense should have bought beef and fed it to his dog, as ranchers have guns and are great protection in the West. When they are gone, the 1% will buy up all the houses and land.

OK I know beef and meat production. Ham is injected as most meat is injected with water as water is cheap and you buy that in inflated meat. So there are means to inject things into meat. The alternative as Mr. Rense held up the package, is that this meat just does not lay there on top of the animal. Meat is muscle and it is deep in the animal. So either the animals is completely magnetic, or the magnetism is introduced. Inquiry would point to why. Frankly, I do not believe that you can infect people with magnetic meat. I would not eat it, but it may be an operation to shut down American food supply by scaring people.

Prions can infect you in pork and beans, or as cells die they shed from people, in sweat and other fluids, which contaminate people. The Morgellons masks are another source of a different platform like the 5G is another part of this. The magnetism though if it could spread, would have to be the same nano particles in the injections which produce a radio frequency. Either end does not have to be exclusive. This can be duel in destroying armed ranchers and taking their land, and also it can be used to infect. I would without inquiry project this out to this would produce an accumulating effect as it would be in your intestines, and then incorporated into the human body. I will project that meat is a viable platform in this. I find it odd that milk or other protein like soy was not chosen, but without inquiry it is all best analysis.

This cost cutter store is not aimed at rich people. This is a poor consumer outlet to the vanishing middle class which would be the target there. I will probably carry my magnet to the grocery to test meat, as I got some brats in the fridge and I will test them before I dare cook them.

TL happened to mention to me the Kristi Noem Chinaman slaughterhouses were all shut down from virus. That would have been an opportune time to set up a process to contaminate food. Do not though overlook that dogs and cats caught and died from this bioweapon. This chit has been viable for over a year, and in that year, livestock could have contracted Covid from Mexicans and this process could be spreading like Chronic Wasting Disease is in deer and elk.

Again inquiry would provide the answers, but the rich can use their piles of money to buy a magnet and go test their food in this roulette as they have nothing but time on their hands lusting about all their money and how wonderful it makes them.

Just understand if this is protein carrier, like Mad Cow, which had no magnets attached, that is a blessing to an extent, otherwise they are going to put this into the water in the same way it was distributed in bottled water and that is like air that we breathe, in you do remember that spike protein was in human shit and in the sewer system. If this can go into water, it is game over. If it is protein, then it needs a specific platform.

As this projects out, this is not living tissue, it is dead tissue. That means when those Vax Lepers die, they are still going to be magnetic. This is not going to end with burying them.  You have not considered this, but what happens if you have Bidencon's 160 million glowing in the dark? You are not going in the right direction so stop thinking and just read. These people are generating a higher EMP. This appears perpetual, unless of course high heat may disrupt it as a magnet in high heat has it's content changed. 160 million American fatties. 200 pounds of fatty. That is 32 billion pounds of EMP flesh. It does not matter if it is in the graveyard or wetware walking. There are 2 million wetware in Kansas City. That is 400 million pounds of EMP on the hoof concentrated EMP.  What is that going to do to the ReVaxNiks, to the environment, to pets, to the electrical grid, to generating a magnetic pitch which is not normal, being amplified by 5 and 6G and Elon Musk's SatNet in this phased array of energized and weaponized fiberform humans.

It will be like the ReVaxNiks will be the healthy cells and all of these cancer cells will be nuking them in city concentrations.

No one has even projected any of this, but now they will begin thinking about it, and this current of EMP is there and generating and the 1% comprehends what is taking place, but without inquiry you rich people are going to get the hard lesson going cheap in cause and effect.

Jeff Rense has accomplished monumental work in Trump in 2016 AD in the year of our Lord and has been one of the reasons this vax hit a human wall of just saying no. If he had not gone out and stuck magnets on things, you would not have these Lame Cherry projections. All you would have is rich people sitting on their asses as dead as their coin.