The Little Donald that NSA Couldn't 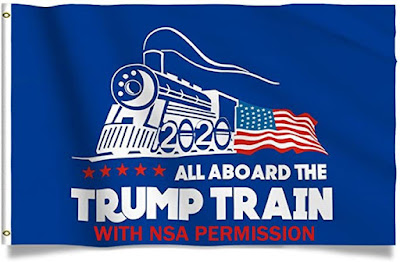 As you probably did not notice this Barnum Trump in the greatest show on earth, Donald John launched himself on Rumble on June 26th.

If you bother to visit Memory Alpha, you will remember another one of the Trump promises in he would return to social media with his own multi media platform, in three months, from March 21st which would be April May June, 21st.......and not any Trump platform.

Trump To Return To Social Media On His Own Platform Within Three ...

Mar 21, 2021 ... Topline. Former President Donald Trump will launch his own social media platform in the next two to three months, one of his senior advisors said ..

Mike Lindell Mr. Pillow tried but he has weak platforms which are personal information gathering hubs, but at least he tried.

So what is up with all of this?

The Lame Cherry has informed you, and until I start reading other platforms picking up this narrative, I will have to keep educating you.

When Obama was dumping money into the stock market and the NSA was creating social media to spy on you from Google, Facebook and Twitter, this was YOUR MONEY. So just like Nazi Germany in the purge, the Obama regime purchased most of the major conglomerates, and this is how this woke stuff took over America in everyone going in lock step. This is coming out of US intelligence in the 1% used your Treasury debt to buy up everything, including your credit cards and phone accounts so all of this is IN HOUSE spying which no longer needs warrants. This is not being covered and is being shut down as a story, for the reason it is facts and only this blog has informed you of this matter anti matter exclusive.

This is why Donald Trump did not build his mega media platform. The 1% in the NSA is not going to allow a competitor platform to wipe out their spy network. It is who Merrick Garland was seizing accounts across the globe for the NSA using US laws. It is because even in the Mideast, those sites are all on NSA servers.

It is why the FBI in that pipeline ransomeware lied and discovered the bitcoins in a California server without warrant, because this was the FBI's server. Now why would a hacker put their coin into an FBI server? Because the hacker was working for the FBI which in turn hacked that pipeline computer for the 1% to create more of these rolling shortages to drive up prices in inflation spikes in order to bring about the crush of the crash on the US Dollar and the financiers will then control these worthless cryptos which again.........are all NSA operations in this 1% control of all.

Donald Trump can not build his own server farm, because it would disrupt the absolute control which has been established. He says nothing to inform MAGA why he looks feckless as it will remind people he is feckless and a hireling of the 1% who did not keep his promises in 2016 AD in the year of our Lord MAGA. It is why the FBI is hunting down MAGA and Donald John offered up his lemmings over the cliff on January 6th, because Donald Trump can do no more than Pedo Joe is doing in the White House. What has taken place is an absolute buy out of everything American, using the US Treasury for the 1% and you are stuck with the debt and the 5 eyes gulag with these pimps of Big Tech.

Just thought you should be pulled back over the edge again as your memories are shorter than the donations the rich people make to this blog. One day what you read and have been reading here is going to be common knowledge in your understanding and accepted. It is almost impossible to jump start your brains though to make that quantum leap.

This is why Mike Flynn is at Q events, sucking you suckers into a group which is overflowing with FBI agents just like on January 6th. It is why Q symbols appear on John McAfee's site after the is dead. No one can get into those sites unless you are intelligence committee connected, in order to spread more of the disinformation as you waited for Donald Trump to deliver for 3 months......and he goes on Rumble by permission of the NSA.