Ashli Babbitt Say The Name Of Her Shooter 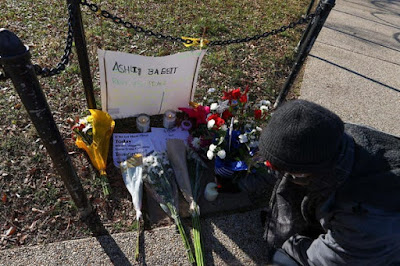 There are now confirmed sources in the murderer of Ashli Babbitt as former President Donald Trump publicly asks the question in who murdered this American Hero.

The first revelation was from April 13rh, but the confirmation was from the acting House Sargeant at Arms in questioning from Rep. Jamie Herrera Buetler who seems as a GOPliter to developing a presence of being the AOC of the GOP.

In confirmation, HSA Timothy Blodgett states the name as Officer Byrd and it was a House employee who first attended to trying to save the murdered Ashli Babbitt's life.

Timothy Blodgett, in an exchange with Rep. Herrera-Buetler during a hearing on Jan. 6 that appeared on C-SPAN, seems to have casually dropped the name.

“The situation where you discussed, where Officer [Byrd] was at the door when Ms. Babbitt was shot, it was our Sergeant at Arms employee who rendered the aid.”

It is interesting that Blodgett names an “Officer Byrd” in the context of Ashli Babbitt’s shooting. An African-American Lieutenant Mike Byrd was reported by Roll Call as having once left his service weapon in a bathroom in 2019.

Officer Byrd was revealed having left his service weapon in a public venue endangering the entire Congress, and his complete name is Lt. Michael Leroy Byrd, who has been confirmed in having gone into hiding after the shooting. Hiding and not working is not exactly something a non shooter would engage in if not involved.

The Identify of Ashli Babbitt’s shooter is—

Multiple Mainstream Media Outlets have known this, but they REFUSE to run the story.

These revelations are most interesting in everyone knows it was Officer Byrd, and yet this past week, someone was planting stories in the media that this was a Secret Service agent, who was on Vice President Mike Pence's detail.

It does not appear that Byrd was with Pence, so someone was lying to smear the Secret Service and to drag the unpopular Pence back into this, again another Qanon DIA psyops designed with intent to trigger those shadowy White Supremacists of MAGA who are on the FBI's hunt list for January 6th.

It now appears that the attorneys for Ashli Babbitt have been handed the smoking gun, which in their demand for the DOJ to follow the law to reveal the identity of the shooter, now possess the name, and once the name is already published and confirmed in Congressional hearings, the Courts have a responsibility to not cover up the name, but force the DOJ to confirm or deny the identity of this named shooter.

Naming the shooter is the right of the American public to know. This is not a lynch mob or a branding of this shooter a murderer in the court of public opinion. What it is, is providing what has been denied Ashli Babbitt in her rights to face her accuser. Because if this is Officer Byrd, he alone tried, convicted, sentenced and executed and American Citizen, who was denied her day in court for January 6th, by murder.

The right to protecting Ashli Babbitt's rights has been suspended in while the DC coroner found Ashli Babbitt was murdered, the federal police state did not file charges against this murderer for Ashli Babbitt. Justice has been vanquished in the criminal courts for Mrs. Babbitt, and the only recourse is civil court to sue for Ashli's rights, and a  civil jury finding for Ashli Babbitt would would name this for what it is in murder and in that finding compensate monetarily for the lie of this innocent woman.

The United States Department of Justice, must now comply with the law of revealing who the shooter was, because this is a matter of Officer Byrd's rights as the DOJ suppressing information, now has brought Byrd's name before the public in a confirmation which if it is not him, is placing his employment in jeopardy and his legal status in legal jeopardy as his name will be brought forth in civil suits in which he will be sued for millions of dollars.

It is tie for the Department of Justice concerning the rights of the murdered Ashli Babbitt and the rumored Officer Byrid, confirm or deny that he either murdered or did not murder Ashli Babbitt. It is time of the DOJ to say the name of the shooter of Ashli Babbit.