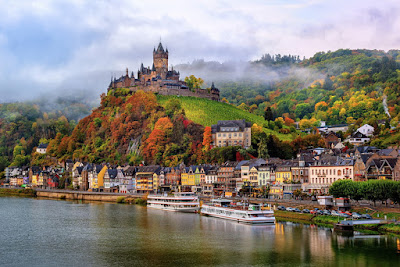 The Lame Cherry is interested in education and over the past Trump years the term volk has been utilized, but it has never been understood. I'm reading a 1000 plus page, in fine print, history of the Germans in the modern era by a Jewish writer named Joseph Shirer, and while he claimed to leave his bias and prejudice at the door, by 100 pages he was full blown Jewish propaganda in being a Christophobe, a hater of Martin Luther and calling the foundational thinkers of the German race as buffoons.

Those are weak points and a true historical account does not pass judgment nor post as much in footnotes as in the written page in commentary. In this Shirer used the term VOLK and goes on as an interloper in Germany who spoke the language to stay the Volk mean more than people or nation. It means in a deeper sense which English can not give meaning to, as it means a tribe, a a clan, but Shirer misses the mark in this, in he is degrading the term to a caveman type description, when in German it means something so deep that this Lame Cherry will explain the meaning of the volk.

Part of the problem in this is, the Austrian Adolf Hitler in Mein Kampf, did not explain what volk was as Shirer complains about that failing, but yet if one reads My Struggle, Adolf Hitler does explain the volk as that is what Mein Kampf is, if you understand Germans, and yet Shirer even sees the answer in mentioning that the German blood coarses the gods of Brunhilde, Odin, Tristan, the heroes.

I desire you to read this:

Richard Wagner made Brunhild (as Brünnhilde) an important character in his opera cycle Der Ring des Nibelungen. The majority of modern conceptions of the figure have been inspired or influenced by Wagner's depiction.

Brunhild has been called "the paramount figure of Germanic legend." The Nibelungenlied introduces her by saying:

Do you see what the Volk is? Brunhilde is the epitome of German legend. Why is she the epitome? It is in the poetic verse as the Volk are poetic souls. She was a ruler, like no one else, she was beautiful and strong, and she contended with the best warriors........where love is the prize.

If you require a few minutes to reread that paragraph, to ponder it, to immerse yourself into a heroic age, for an age of Americans with John Wayne,, John Phillip Sousa, Irving Berlin,  Henry Wadworth Longfellow, Francis Scott Key, the stirrings these men brought to life in touching the heart, this is where one starts in comprehending the depths of the Volk. The Volk are those thundering words in WE THE PEOPLE in the Preamble to the Constitution. This is not caveman stuff, this is the metal of men and women standing on their hind legs and not being just humans, but handiwork by the hand of God, the soul who aspires to greatness by being, by not cowering in fear, but striving in fear for that thing which makes the heart beat in the pursuit of happiness.

The Volk are a race of people. They are a character of the heroic attributes of a people of accomplishment, not of fear.

This is hard to understand in what the Aryan is, because the German arose from a branch of Aryans, and you know them as Jonah visited them to plead for them to repent. These were the Assyrians and if you pay attention it is AssyRIAN, a people as the SyRIAN of the same name, as are the same family group of the children of Shem or Shemites or Semites. Yes Germans are Semitic peoples because they are of the lineage of Samarians, again SamARIANS who are the namesake of this group in the exiles of the Northern 10 Tribes of Israel. Syrians are Aram, related to the Israelites, just as the Elamites or Iranians, again the IranIANS, who chose that name because it was Aryan and was meant to appeal to Germans.

The great advancement of mankind was God's Spirit in Solomon. This association advanced the Mideast peoples, and all the places the Sarmarians moved through in exile. This is the Aryan which the Germans championed. This is the stuff of the Germanic legends, before Martin Luther liberated them from popery in Protestant Lutherans who changed the world. The Assyrians followed in the steps of the Samarians, who in one group were named by the Romans as Germani, and when they moved on, the Assyrians in their branches of family moved in with their gods, and settled from Prussia to Hanover this naturally warlike children of Nimrod.

It was this people, this volk, which Richard Wagner memorialized, in their genius, their creativity, their arts, their blood, for it is twofold, the Germans speak of their blood, and their blood is always linked to two figures, soil and sword. The Germanics have two uses for iron and that is the plough and that is the sword. One nourishes the blood and one defends the blood.

There are two branches of "Germans". One is Saxon. One is Sachson. The Saxon is the Sons of Isaac in Biblical terms are Isaacs sons and most of them ended up in the United States out of the tribe of Joseph. The other Sachs is the Sons of the Sword. Both are near kindred, but different branches of the Semite lines. Both of these groups are a stoic sufferers, dependable workers and resolute fighters in a Christian Faith. It is why they are the target of being erased in what is being engaged in now. They are competitors to the 1% who have implemented a worse Nazism upon the world as dictators. This volk is Spiritual and that is at odds with the immortals of the 1%.

Volk, breathes, beats the heart, is of the land, is of the struggle, is love, is against all odds, it is the individual united as a people.

Volk. WE the People. Now do you understand.