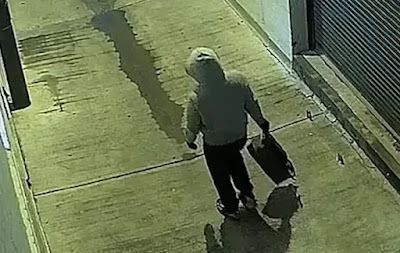 According to the Associated Press, the FBI is still looking around 300 more suspects who have been labeled “unidentified” in pictures from the insurrection.

The first wave of arrests, the press agency said, were focused largely on the “easy targets” in the investigation.

Now, however, the FBI faces the task of continuing to identify scores of other suspects who have been more difficult to track down.

I was reading the Mockingbird Media propaganda from Yahoo, which is the CIA's acquired media platform for intelligence leaks, and it is interesting after the NSA for the DIA was humiliating the FBI as being incompetent in Director Christopher Wray in the bureau could not be  trusted with Chinese defectors, that this hit piece on the incompetence of the FBI and DOJ are the reason the DC Pipe Bomber has not been caught.

The following reads like bad propaganda because it is. We do know now that out of 500 plus arrests for misdemeanors that the FBI has got the "easy" ones, and the remaining 300 are the really tough arrests. Yes there are going to be close to a 1000 arrests over January 6th on trespassing charges, Americans tortured in prison, their rights violated in no speedy trials while Yahoo again mocks Americans for wanting trials by jury, as silly Americans are just supposed to how up on court and plead guilty. As stated, this is really bad propaganda as one would have to under the IQ of 50 to write it and believe it.

The fact is though that only one certified murder took place and that was Ashli Babbitt, who was set up by government agents for the slaughter. In that the only real violence which took place on January 6th is now known to be government agents, the police and that is all. One infamous released footage of 14,000 hours hidden away, shows a man screaming at police. What the FBI has not shown the world is that a police officer cold cocked this man just before this in a cheap shot as he was doing nothing. Yes the indictments are all about a set up of Americans in order to intimidate Americans as the new lethal Indian Delta strain of " the hard to track down Americans" is what the FBI is now focused on half a year later, as the one real terrorist in the pipe bomber has not been tracked down while valuable time has been wasted on trespassers.

Yet, authorities have failed to track down one key suspect who placed pipe bombs around Washington DC, on the eve of the attack.

Images of the suspect captured through surveillance camera showed an unidentified person wearing a backpack and grey hooded sweater placing two pipe bombs around the Capitol Hill area on 5 January, just hours before hordes of rioters, including many Trump supporters, would storm the US Capitol Building.

There is so much obfuscation in these pieces on Yahoo, such as 3 times were at the US Capitol, and two were dispatched at the (Democrats are listed first showing bias against Republicans) their political headquarters, so the Capitol was left almost unguarded so this could have been a diversion.

Out of millions of police officers and federal agents, who were not even called up, DC only has 3 groups of officers to protect the Capitol? That is utter nonsense and more of this fiction which is being processed that the pipe bomber and the police agent led breaking into the Capitol are related as a planned operation.

The facts that refute this are indeed in this article.

Officials have also suggested that the pipe bomb planting could have been a “diversion” to distract police.

In his own testimony, Capitol Police Inspector General Michael Bolton said that when the pipe bombs were discovered on the morning of 6 January, three teams were dispatched to investigate, leaving just one team to protect the Capitol.

“If those pipe bombs were intended to be a diversion, it worked,” Mr Bolton said.

What has been verified by the Yahoo propagandist is that these pipe bombs has EGG TIMERS. Read the following quotes and understand how the narrative is bogus. I will first ask how long do egg timers operate? Is it a 3 minute egg or a 3 day egg?

Then notice in the quote when the bombs were planted.

The devices contained explosive powder and were fitted with egg timers.

placing two pipe bombs around the Capitol Hill area on 5 January, just hours before hordes of rioters, including many Trump supporters, would storm the US Capitol Building.

No it was not "hours" as in the morning, before Donald Trump spoke, but the last time I checked January 5th and January 6th are not even the same day. So in just guessing as I do not have an egg timer, that an egg timer runs 60 minutes, how is a pipe bomb going to be a diversion on January 6th when it is planted in the dark hours of January 5th?

This is horrid propaganda and the CIA is not getting it's money worth, and this is making the DOJ and FBI look to be absolute fools like the DC cops who are pushing a narrative of this was a distraction for January 6th.

The FBI is still offering a $100,000 reward for information that leads to the identification of the suspect.

Anyone with information is asked to contact the FBI at 1-800-CALL-FBI or send in tips online anonymously at tips.fbi.gov.

The facts we do understand as the public is the FBI has never released anything but poor quality video of this pipe bomber. There are hours of this which the public should see to help in this investigation and that is being hidden.
We know this pipe bomber navigated DC without GPS, so this individual was very familiar with the location of DC. This person is also skilled as in trained in avoiding surveillance as the FBI has proven and they were trained to make bombs, which were not to go off, but everything about this bomber appears to have been a set up like January 6th to enact a "domestic terrorism" or Patriot Act activation to not require federal warrants.
We know from Sara Carter in asking question which the FBI refused to answer, in the FBI was gaining access to Citizens cell phones and bank cards without warrant which is required by law. This blog has noted that with the Obama money dumps on Wall Street, this was all in house computers of the government as they own CITI and VERIZON so they do not need warrants. This is another fact which is being hidden away, as much as Joe Biden now stating that Russia was not behind the oil pipeline hacks which had the ransom money placed into an FBI computer in California. Again like OKC and Hutatree we are seeing on January 6th a duck that walks and acts like it is federal operation of entrapment, and the conclusion is why this pipe bomber is not arrested, is not that they are elusive, but they were part of this operation as this was a very coordinated effort which has been placing thousands of stories into the media driving a narrative which is a fabrication.

It is equal to the Yahoo summation that tips are anonymous to the FBI. Stingray which is another FBI overreach gathers all ISP data, which is every persons location data and computer chip signature, so anyone making a report to the FBI, is indeed known. This is of benefit in discovery in court cases, because those being accused then can call those who are reporting them anonymously as the electronic fingerprint is absolute.

All of this begs the conclusion on the data of, "Why is the regime owned Yahoo outlet, placing propaganda before the public which is showing the FBI and DOJ as incompetent in tracking down the DC Pipe Bomber. In factoring this out, we have witnessed an incessant DIA mocking of the FBI. Remember back to the Devin Nunes hearings which were supplied original information from the NSA in leaks which pointed to the criminal actions of James Comey of FBI and John Brennan of the CIA, how in this very mirrored image, the propaganda presented projects a narrative that the FBI can not find the DC Pipe Bomber, because this is one of the FBI's own assets, agents or contracted operative. That is the glaring undercurrent of this Yahoo piece.

Is this a case as in Timothy McViegh still breathing as the curtains closed on his execution to stunned reporters, that as "information" was released in the first days of the Bush43 regime over OKC and suddenly the John Doe information vanished and the story, that someone at DIA is blackmailing the FBI and DOJ with this tidbit of information in telling them, "We know you know who the Pipe Bomber is and you will fall into line, or this person is going to appear like the Chinese Defector in our protective custody and set off a revolution as other DIA planted stories of FBI involvement are conditioning the American public".

That is what the data projects to in what is taking place in this Qanon, Trump will return to office in August maelstrom. This is coming from the inside.

Every intelligence service in the world is concluding from the information above that this was an inside job, and that is what the narrative out of Moscow is focused on.

It is a 3 minute egg, not a 3 day egg. Who really set this timer as someone at DIA appears to know and is taunting those who do know.