The Blasphemy of the Catholic Mary Cult 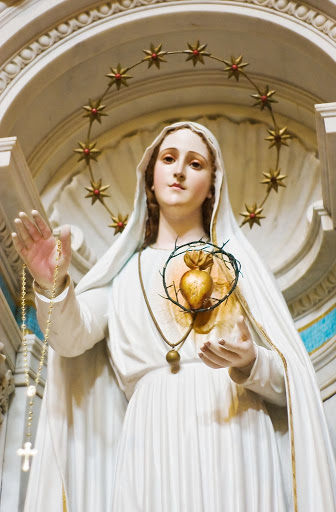 The exposure of the demonism which has willingly created the great deception in the Catholic religion, is becoming more relevant with each passing time line, for the  time line we are in.  The Vatican created a number of false teachings from purgatory as a ransom house to extort money from the living, limbo, which is where saved children of God were held before Christ died for their sins, as there is no Faith in the Catholic religion, to the Marionism or worship of Mary. The way it is explained is Mary ordered her real story to not be told as it would take away from Jesus. Catholics never explain though, why it was the Church failed under Peter and Jesus, and it took Mary to work her mumbo jumbo to save the religion in the cult of Mary, which ran into the German Martin Luther who exposed the blasphemy of popery and saved Christians around the world from the whore of Babylon, or the Vatican state religion.

It will probably surprise most of you, that "Mary" appeared who was in reality a demon, the queen of heaven, and told the possessed and deluded nuns, that the real story of Mary was that she died, but then returned to her body, in a kind of sexual reanimation, where she rose herself from the dead, and then in a grand possession went back to Heaven, to attain her real position.
While this was going on, Peter and John were outside the tomb and perceived all this was going on, entered the tomb and found her folded clothes, which probably became more icons as you could have covered the world's navies in canvas for sails for all the robes of Mary which were bought and sold.

Here is the quote from the Catholic mystics.

Yes Mary is not dead, she is not in the tomb, as she was reanimated, Jesus leading the way, God penetrating her dead body, and procession from the tomb to Heaven, with rejoicing angels and saints, and then Christ and then the Immaculate Mother, while all welcomed here and chanted, "Who is this that come up from the desert, flowing with delights, leaning on her Beloved?"

It gets worse as this queen of heaven, revealed to the nuns that she is both the daughter of God, the mother of God and the wife of God, yes that is creepy as hell in incest which is promoted, but in the quotes below you find out that unlike the Bible stating that no one can earn their way into Heaven, Mary not only earned her way, but she has a claim on the Kingdom of God.

So "Mary" did not need Jesus salvation as she did it herself. She rules the Kingdom of God, and we know this as "Mary" said that she was crowned the lawful sovereign and queen of Heaven.

No one points out, why God would create a human replacement for Him, so what is God doing? And more to the point, if Mary got the prize, then why was any of this necessary as Lucifer was still a pure Archangel before it became satan, so why did God just not hand everything over to satan, as God was going to abdicate anyway. It would have saved Lucifer from sin, as Mary got the same thing Lucifer aspired to.

Our Daughter Mary has been chosen by Our will from among all creatures as the fist in Our favor, and she has never fallen from the position of a true Daughter. Therefore she has a claim to Our Kingdom, of which she is to be acknowledged  and crowned the lawful Sovereign and Queen.

Apparently the Father, Christ and the Holy Ghost each had to give a speech, as "Mary" was so special. Remember Jesus taught us that ALL THINGS were handed over to Him by the Father, and Jesus earned this by obedience and death for saving all of us from sin. Jesus is our only Advocate with the Father as Scripture teaches, but not this "Mary" who now tells us that Jesus turned everything over to her. She is now queen of Heaven.

To My true and natural Mother belong all the creatures that I have created and redeemed, And of all things over which I am King, she too shall be the rightful Queen.

Finally the Holy Ghost calls Mary His wife, who was faithful only to Him. OK that is not what the Bible teaches as Mary and Joseph did have sex, and Jesus had siblings. The real Mary was never a wife of God. She was the faithful wife of Joseph. She was chosen by God for Him to sow Himself into to become a human form, so He could lay down His life, but nowhere in this, was Mary floating around the rooms in levitation, had a thousands Angles she was ordering around, who were doing her house chores, and she was not healing people and raising them from the dead, as these mystics were told by "Mary".

By the title of my only chosen Spouse, to which she has faithfully corresponded, the crown of Queen is also due to her for  all eternity.

All of this was called The Assumption and Crowing of Mary. This was predated by something called the Dominion or something, where Mary died, but everyone showed up for her death, she was glowing, servants could not go near her dead boy as it was glowing, and John and Peter were ordered to not touch her body as she was so pure, purer than Jesus as Jesus was prepared for death.

So the basics of the Vatican's Mary, is that she rules for God, which is a lie. Also people do not need Jesus as the Pater Pope Francis lies about, as they have Mary. Anyone who calls upon her in this false teaching is saved. She rules, is honored and God is not honored, and God exists now to bow down and serve "Mary".

"Mary' does it all. Jesus said the Holy Ghost is our Comforter. Not according to "Mary" as that is what she does, the very necessity of what fills us with God's Spirit to make us a Family of God, is negated by "Mary", as "Mary" in you makes you the Body of Mary, not the Body of Christ.

Our Beloved and Chosen One among creatures, Our Kingdom is yours,. You are the Queen and Sovereign of the Seraphim and of all Our ministering angels and of all the creatures universe. We give you power, majesty and dominion over it. While filled with grace beyond all others, you humbled yourself to the lowest place in your own estimation. Receive now supreme honor which you deserve, and participate in the sovereign power exercised by the Divinity over all that Our Omnipotence has created. From your royal thrown you shall rule over hell, and earth and nature. Our won will shall ever be ready to accomplish your will. You shall be the Protectoress, Advocate and Mother of the Church Militant.

Whenever any of the children of Adam call upon you from their hearts and serve you, you shall relieve them and help them.in their labors and necessities. You shall be the Friend and Defender of the just and the of Our friends. All of them you shall comfort, console, and filled with blessings according to their devotion to you. Therefore we make you the treasury of all Our graces. In your hands We place the distribution of Our grace and blessings. For we wish nothing to be given to the world that does not pass through your hands. And We will refuse nothing that you wish to grant. Whatever is Our shall be yours, just as you have ever been Ours. And you shall reign with Us forever.

This false doctrine has permeated Catholicism.It was not in Jerome's horrid translation of the Bible, and yet these demonic oracles are what is Catholicism. Pater Francis spews things of Mary in not needing Jesus which stuns the conservative Catholics. Catholics have got to get out of this whore of Babylon cult, as much as Lutherans in the sects going woke as the Methodists, Baptists and whatever else is out there hijacked by the CIA MKULTRA to put in the foundation of the great deception of these aliens who are demons harming people.

The fact is, you pray to Mary, you put your trust in Mary, you are going to hell, as she can not pay for your sins, she is not Jesus, she is not God.