There is only One America, Dr. Anthony Fauci 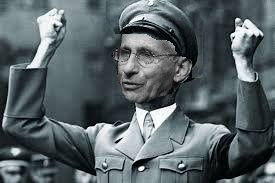 Dr. Anthony Fauci, the VAXPHOBE addressed a matter of American Patriotism on this July 4th weekend which he has proven unqualified for as much as predicting the protections from a plague, in attempting to divide America into Vaxed and UnVaxed.

Fauci - 'There Are Now Two Americas, The Vaccinated
And The Unvaccinated' - (That's The PLAN)

Let us be frank in this, that from the start of this Anthony Fauci is getting talking points from the 1% as their stooge, and has been more interested in his financial interests than ever protecting anyone.

Fauci like all fascists and that is what Anthony Fauci is, and here is the defintion.

That is Mandate Mad Anthony so drunk with power that his intoxication gives him the psychosis of Vaxphobe to Pedovaxer. He simply can not issue enough decrees to feed his ego.

America is not divided, even if that is what Dr. Fauci has been warping America to. The Vax Lepers are not shunned by the ReVaxNiks  and there is neither ill will or hatred in these Americans to the others. They both have made a privacy issue in their medical treatments, just as in aborticide, just as in other vaccines, just as in any visit to a doctor, and that right is respected on both sides. The UnVaxed hope for the recovery of all the Vaxed and there is not a Vaxed who wills the ReVaxNiks to die in not being injected.

So there are not two Americas at all. In fact, Americans are so enraptured in being freed from Dr. Anthony Fauci, that they have stopped listening to that troll. The masks are gone. People are gathering and not being made sick in contact. People are remaining safe and this Indian Delta is not a threat at all in it's symptoms are hayfever allergies.

Anthony Fauci is going to have to go back to sticking pins in his Barbie Dolls in treating those poor pin cushions for mystery diseases that Anthony dreams up in Fauci Pox,  Faucitis, Fauci Measles and his favorite of CoronaFauci. Going back, because Americans made their decision and have moved on.

Joe Biden can cancel fireworks at Mount Rushmore in another unAmerican display, but that is the typical Jimmy Kimmel rancid attitude of cheap hatred. That does not divide America, it only means a time will come when the hatred will burn out, and like all liberals, they will discover how much of life they wasted in being hateful.

Anthony Fauci has accomplished his worst in funding Wuhan Obama labs, denying treatment of Chloroquine so the innocent died, and is now crippling children with the child vax, but the fact is the United America survived this, will care for the invalid and comfort the grieving. The germ which the 1% of Anthony Fauci is, has been survived, people are now more informed and no longer are succumbing to shock propaganda as Anthony Fauci may be a chicken little, but the sky is not falling on the world.

So Americans will celebrate the 4th the way they choose. Some will do it with their own personal restrictions and others will be in huge mobs. It is all though One America on One Fourth of July and On People.

The Lame Cherry pities Anthony Fauci for his deplorable nature. At Christmas he terrified and terrorized children over infected Santa Clause and now on the American Birthday, he is dividing America as if he wants a civil war. History will not be kind to Anthony Fauci any more than it is to any of his kind who sow intrigue and trample upon human dignity and rights.

The Lame Cherry blesses Anthony Fauci to have a happy 4th of July, and you know he will as he has been caught in photos not following his draconian edicts any more than Joe Biden or Nancy Pelosi does in their gated mansions. Dr. Fauci and his elite comrades will enjoy the luxury that America has provided as it has been deprived of others on this 4th of July, but there is no division in America, as Americans have moved on, Vaxed and ReVaxNiks, and the Pied Piper Fauci will be tooting his flute alone as Americans are a People not rodents following his dividing tune.