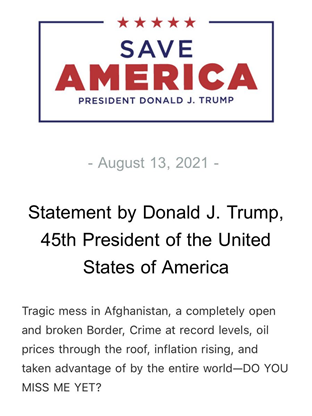 I will have to ask the murdered Ashli Babbitt, the other Americans left for dead on January 6th and the other Americans hunted down by the FBI and numbering over 500, and gain a consensus on this as 100 million Americans are in hiding by intimidation and you told them to get this vax that is killing and harming records of numbers of people, but personally, no I have not missed you as you abandoned people who trusted you.

I will not follow Pedo Joe, but as you left America with him, I ain't missing you at all.