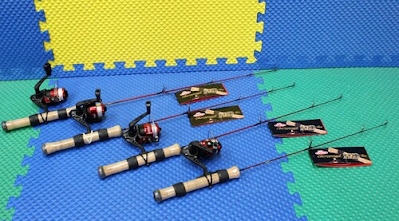 Everything in the junk yard is not gold, because often times people do through things away which are broken or junk. This was the case as last spring I was looking at ice fishing gear and noted on the Berkley site they had Cherrywood rods for ice fishing which were expensive. I did find a site which had them for 20 bucks, but that is for me a great deal of money with non donors living in luxury. 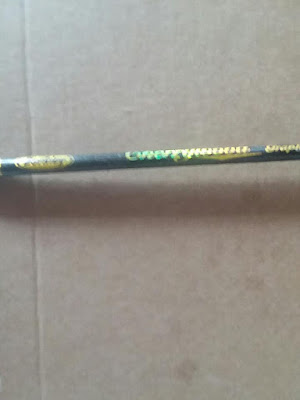 So you have probably discerned that this post is about a Berkley Cherrywood ice fishing rod, and it is. I had no idea what I had picked up in the junk people dropped off at JYG's until we got home and I looked at the rod and was delighted it was a Cherrywood. Slight problem though is someone snapped it in two before the first eye.

I did a search online to try and figure out how to fix the thing as it would cost to probably ship it back. It says it is graphite, but the rod looks hollow and metal. In looking at predator damage from government grown vermin, I glanced up at some rods my old man had bought on a sale years ago, and there was a broken original fiberglass rod in the bunch and I hoped it would be a spline or whatever to fix this rid I had.

It was flexible and when I shoved it in, both ends, it actually did enter. The part by the eye though stopped so something was in there. For all I know another break repair, but in noting it would fit, a bit too loose on one end, I reached for the Shoe Goo.

Yes there is a synthetic product to fix shoes. It was that or either E 6000 which works wonderfully, but takes forever to dry and it stinks. So I spun the goo around the blank in coating it, rotated it in as I inserted it, and did the same with the other end, and it all went together. 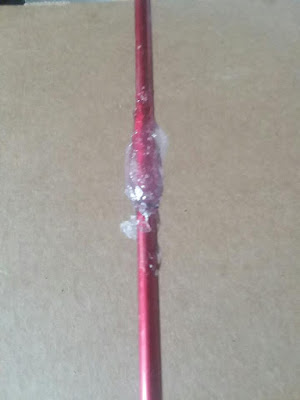 I'm sure the prisses will say, that looks like shit, but shit is what you want, as just like bones that break, you want a larger area on the break to make up for the break, like a pipe fitting.
The plan is with a razor blade to shave off the gobs above, and as I just did this today and it needs time to dry, that will be a bit to cure, and once that is done, I will wrap it with black electrical tape and have a fantastic rejuvenated Berkley Cherrywood Rod for nothing.
I'm not like these gaytube guys who are reeling in fish and bending their little rods in an arc. I may jig with a rod and set the hook, but otherwise I bring it in hand over hand as I find it too time consuming to reel line in and then let it back out.
I think this rod is too long. It is almost a fishing rod, like something a dwarf would fish with, and that is probably why it broke in someone was reel fishing in the ice and hooked up some big fish and snapped the rod, either that or the idiot stepped on it in the garage when drunk from beer fishing.
That is not beyond the possibility as I picked up a second rod for ice fishing with the top eye broke off. No need to be concerned as I used a file and just cut it back to the next eye and I have instant fishing rod............well after I get some kind of attachment that looks better than hose clamps to hold the real on.
Anyway you can fix snapped fishing rods. Maybe they are not trustworthy on 20 pound pike or cats, but for panfish they are the medicine which will suffice when you have non donors and you are always begging for money.
This is another Lame Cherry exclusive in matter anti matter. 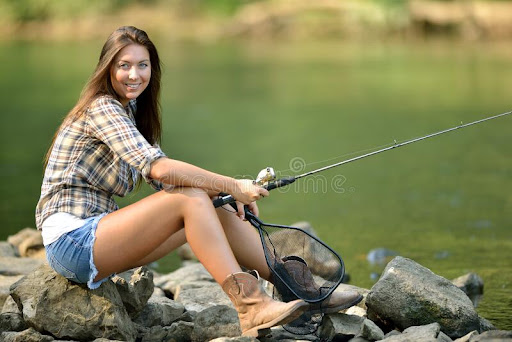