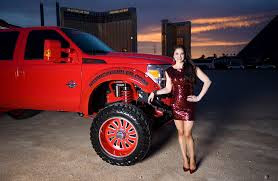 This another Lame Cherry exclusive in matter anti matter teaching lesson when the lights go out and you have to move something out of the way which is heavy.

Once again, the best example is what I go through in dealing with undoing other people's dumb ass shit.

So on the place we want, the wicked one had brilliant idea. They had to be brilliant as he went to college and knew all the agribusiness shit that makes crooked people rich. So Beloved Uncle had a pole barn, and he spent a great deal of time and money fixing it up for working cattle. POOF that was all ripped out and I have no idea where it went, as instead you put shit you stole in the inheritance and other crap no one wanted as that is what the wicked one did.

So in the back, and there were poles in the way holding the shed up. he had steered in a flatbed trailer. I have no idea how long it took him to get that thing parked, but I do know from coon shit and dead horse skulls (Yes where in the frick do you find dead horse skulls and why in the frick do you pick that dieased shit up?) but I got to move them as they were there.

So I had to turn this trailer 90 degees around a post, with tires half flat. Tractors would not start, and now way to get in there anyway, so the solution was again what built the pyramids on a too hot day, battling 7 foot tall weeds exploding pollen all over me.

The key to moving things is the old block and tackle as it divides the weight up by pulleys, making things way less. 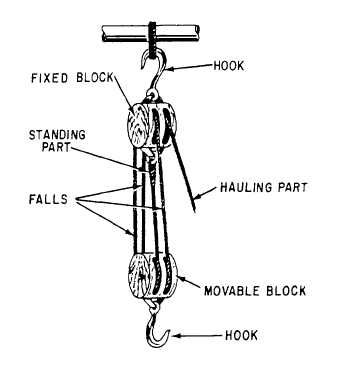 That is the block and tackle. The are not as good as they have ropes on them, and ropes are always old and they always break, hitting you in the eye......yes I know from experience. 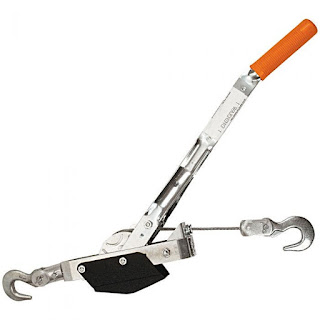 So I prefer a cable in a come along, as that is what they are called. I do not like the come alongs with a pulley on the end as the shit just gets in the way, and the point is, if you have to have load reduction weight on a come along, you probably should not be standing around jacking anything that heavy as it probably will snap and take your head off.

So I use the single cable come along.

You are going to need something to extend from where you are pulling to where you are anchoring to, to pull, and that means log chains. Ropes or pulling bands will work, but nylon stretches and when you are ratcheting things, it gets old losing a foot every time getting things tight, and then trying to hook up again, having to take that spring out of the rope in loosening things up again. 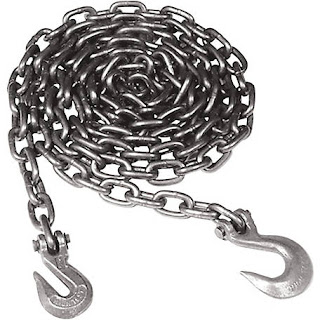 Note on the above log chain you have the hook that hooks into the chain solid and the one where the chain slips through the hook until tight. Slip hooks are great for logs, or for direct hooking to the solid part of objects you are pulling on. They work great for going around posts, but you can make either one work as the chain hook is great for making loops to take up slack in what you are pulling. So in most cases a hook of each type will be more useful.

You will probably need two 16 foot chains, plus you 15 foot of the come along, and then you will find that a short chain to hook around things will save allot of effort too. 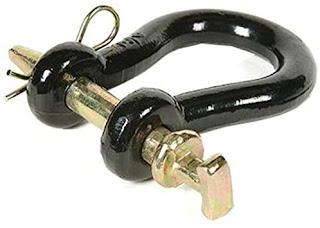 Next, you need a clevis or two. These hook into the chains or hooks you have chained or hooked around. My great problem was all I had was a drawbar hitch on a trailer and an old 3/8th inch trap chain stake. See I do this for a living out of being poor, so I know something about load limits. You should not try this Darwin stuff, nor like using a dog chain to fill in as I needed 6 inches to get this thing moving as I was 6 inches short. Yes this is from someone who has had a rope snap and almost lost an eyes so I'm careful, but Providence fills in when I know what I'm doing. You on the other hand, better go extreme and not cut corners.

They have things called PINS and you will need them too.

You will find that trailers do not make 90 degree turn angles. So I pulled some, then went to the back of the trailer, hooked it up to a post at the right angle back there, and pulled it at 45 degrees to make the turn. Must have been the thing to do as the almost flat tire went really flat, but God put a cat food sack under it, so it was slippery and away it went.
Yeah you never thought of that in putting things under things to make them slip did you. Sometimes you will have to pull things on round tires sideways which things are not supposed to pull.

So I kept changing my angle of pull by the non broken corral posts I could hook to. Or I should say not too broken off. Hook things always low to the ground and maybe it will work as that is all I had. The point in mentioning this is, I could tell you to pound in stakes at triangle angles to hold in clevises, but the will probably come flying out and kill you, and geniuses always think, "Hey I'll just hook up my big ole Chevy truck to that thing", and soon discover the pick up is sliding, making creaking noises or parts pull off. Best things are solid in the ground in trees and something heavy like a tractor. Other than that I doubt you happen to have a boulder handy and you will need another 30 foot of chain to get around it.

Your ideas will be those nifty 2 x 4 rafters and 2 x 5 joists looking inviting and they will break, probably injure you, and then you will have sagging things, and not be happy. The thing you anchor too is as important as what you are pulling with.

So we got the trailer scuffing the door and as wood kind of looks good scuffed, I scuffed away for 12 inches and we glided past it.

Now the trailer with more dirt and dry rot on it than trailer can get washed off, as that is the problem with the trailer is when it rained it got leaked on and the wood was rotting. It would have been better to have had it sitting outside. Can paint the thing or pour old motor oil on it, and the wood keeps.

So that is your lesson.

Would I just love to use a machine. Sure I would, but I was undoing some half assed shit again and that takes some doing, in fact that took us 2 hours to get that thing guided to the outside world where it could be hooked up and get the tires pumped up again.

You will probably have lots of stuff like JYG in furnaces in basements and hoping like hell the kid helping does not slip the clutch and crush you with that big ole furnace on the steps coming back as it is chewing up those steps like a dog with a bone. You at least now understand how the Egyptians did it or the Israelite slaves did it.

Word of warning, if you hear a creak or something that sounds odd, STOP,  and DO NOT LOOK at it, as something might be ready to break, just get back, study it at a non lethal angle and then figure out how to go from there.

If you survive the world, don't be a Darwin auditioning to die in it