The H in H Norman 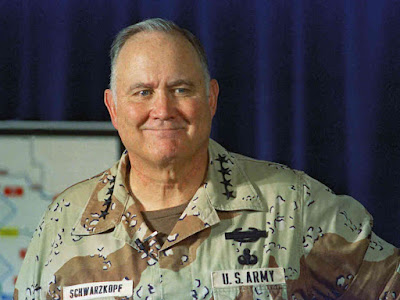 In reading the autobiography of General H. Norman Schwarzkopf, as there was no 'jr' as his father's name was Herbert Norman and H. Norman was just the "H", a great deal of what is wrong with America was typified in this liberal, because H. Norman for his gun ownership and other "conservative" values, was a liberal who voted for that trash.

I picked up H's book for 60 cents and I noticed that the previous owner's bookmark stopped at about 100 pages in. H wrote a 500 plus page memoir and I was quite proud that I read and finished the thing. The first part in his childhood was much more interesting than that 1950's shit, which only the idiots who were there thought they were cool, while the rest of the world moved onto the 60's.

He said he based his book on Grant's Memoir, which is massive too. That I have not had the time to read even though I dearly wanted to. Interestingly, I have read seven times that volume in the works of George and Libby Custer, Stonewall Jackson, William Sherman, Phil Sheridan, James Longstreet, and honestly there was not a bad volume in any of these Americans.
So I can not compare H. Norman to US Grant's work, and can only relate that beyond the whining about Vietnamese, Soldier's Families, there was not a great deal in this book, save for my favorite story.

H's father, was like the military attache to Iran during World War II, and built the Shah's army. H lived there with his father for a year, and it was a great adventure for a German American boy from hunting to treasure store rooms.

That is what was interesting to me as the Shah had a store room filled to the rafters with gold. The Iranians allowed the boy to see the treasure, and one of the guards told H, "You can carry away all the gold you can lift".
The gold bars were loafs and in that I want to share something which in the movies is never shown. Gold, Silver and Lead, if you had the size of a soap bar, most of you would strain. My first time in seeing a piece the size of  romance novel, had me about pulling the joints loose in my shoulders. You simply can not believe that something so small can weigh so much.

H never did get any gold lifted and the guards were delighted in the boy trying. There were also rubies and emeralds the size of fists, pearls galore and special made treasures like a gold and jewel studded globe. The Iranians were very proud of their national wealth and were pleased the treasure made such an impression on a young American boy.

I have always wondered where that fortune disappeared to when the Shah was forced out by that loathsome failure in Jimmy Carter. It just amazes me in what suitcases of gems would be worth and all of these treasures always disappear and reappear in war and revolution.

From a historical perspective, yes I learned things in this memoir, but after his youth and the stories of him being the little shit he was as he had shitty older sisters, for example he had a crush on some Hollywood idol and his sisters told him she was on the phone, and H picked it up, and they asked what she had said, and H replied, 'Your number please". They had dialed the operator and rolled on the floor laughing.
His response was he had been taken to an action movie, and having nothing to do, was bothering his mum, when she told him, "Why don't you go play Indians like in the movie". H was delighted as he grabbed a hammer, ran upstairs and promptly tomahawked all his sister's dolls in the head.
The howl of his sisters brought the defense from H to his mum,' You told me to go play Indians".

After this, the human side left most of this and it was the soldier in experiences of a US military having horrid people in it, and the restructuring of that military after Vietnam, to what became the Gulf War.

That though was the book and all I found beyond the technical material to take away was the few family stories which were amusing, so I suppose as none of you read that book and none of you ever will, including the future readers as this book will pass into oblivion as no one really cares what happened to French losers in Vietnam or British victors in the Falklands as little wars have little one can learn from.

Odd how Muslims always want the 70 virgins and sex, but for me, the appeal would be 70 babes with rubies the size of.......how about breasts as a fist is a breast, when it comes to a pound.