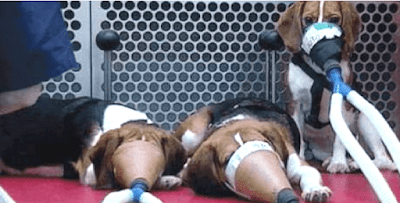 Our 21st century has changed. The 20th century provided a moral line in the sand in the United States of Adolf Hitler's Reich did heinous acts against humans. The Soviet Union and the United States engaged in like atrocities in fire bombing cities and mass murder of Germans after the war in their own concentration camps which have yet to be dealt with, but the social order progressed on what Republican Theodore Roosevelt championed in children would be protected in labor laws, public health would be protected in the FDA and animals would not be mistreated, as all agreed that bunnies, dogs and cats having chemicals injected into their eyes for human cosmetics was inhumane.

But enter the Birther, Barack Hussein Obama and Pedo Joe Biden and a little known ghoul by the name of Anthony Fauci at the National Institute of Health, and that trio put a gash on humanity in True George I and George II Bushisms. Where the Bush family circumvented laws against torturing prisoners by shipping them to Afghanistan, Jordan and other hell holes, Barack Hussein Obama circumvented American laws over biological weapons research in one of the most macabre and crimes against humanity avalanche of policies of anti Americanism ever produced.

Fauci-US Involved With 65 'Projects' At
China's Wuhan Lab After Gain Of Function
Was Banned Here In The US!

Gain of Function is code word for a kill shot virus which is lethal. The evidence is still appearing that what America banned, Barack Hussein Obama, Joe Biden and Anthony Fauci colluded with Justin Trudeau of Canada and Xi of China to not just study, but to CREATE.

that not only was there just one Wuhan lab project, built by a Jewish professor out of Obama's Harvard for the PLA in China, there were 65 projects, some contracted by the Department of Defense.
This is beyond the treason of Bill Clinton and Al Gore taking bribes from Asians for their campaign, sending over satellites with top secret inventions which the PLA stole on the launch pad, and even beyond George Bush and his Spy Plane handed over to China and America forced to pay a bribe, as Obama handed over a Stealth Helicopter to China for the fake bin Laden execution. No what Anthony Fauci engaged in was every vile act which has been rule unlawful in the post Nazi war world.

For example in the above link. Anthony Fauci funded a sadistic study in Africa, outside of US Laws, in which Beagles were sedated, their heads were stuck in to a bug chamber where killer insects ate their ears off. These dogs where then slaughtered, much like the humans which Dr. Fauci has been lining up to be slaughtered with Remdesivir after Fauci knew that Chlorquine was an effective treatment.

In David John Oates reversals on Anthony Fauci, all this sadist talks about is his filthy lucre and that all of this Coronavirus is a con. just  to make Fauci money.

All of this centers around Anthony Fauci. Bill Gates in his equally disturbing programs funded Fauci and Fauci gave Gates regime carte blanche for that wickedness.

The facts are that America outlawed animal research of this kind of torture and under Barack Hussein Obama and Joe Biden, Anthony Fauci took this global. Anthony Fauci is the ringleader of a global torture syndicate of pets.

This is what is confounding to the mind is on one hand liberals and conservatives helped stop the butcher of dogs for food in China. Meanwhile in Asia and Africa, Anthony Fauci behind the Dr. Mengele curtain was breeding plague weapons which two were released, which cost the world piles of bodies and trillions of dollars, along with their freedom an liberty.  Nom de Deuw, Australia has turned itself into a Mengele death camp in refusing to treat unvaxed humans. This is the world that Anthony Fauci created under the offices of Barack Hussein Obama and Joe Biden.

Anthony Bellotti is having an impossible time getting the corrupt US Congress to even look at this. If not for Sky News in Australia, no one would even know of this disgusting series of projects by Anthoy Fauci which are still going on today.

Communist China has sworn to displace the United States and colonize the West. They are preparing for World War IV against America, and into this the creature the Bush family built, appears Dr. Anthony Fauci handing biological weapons of mass destruction over to the PLA to be used against the world.

Seriously for a moment put yourself in Anthony Fauci's place, behind his desk.  A project to be funded to create a biological weapon that the French blew the whistle on in how dangerous it was, would you fund it and develop that virus? Anthony Fauci did, around 65 times.

More information crosses your Fauci desk in you are informed the Chinese are going to be torturing animals to death. Fauci doesn't blink and eye an funds it all. Would you?

Of course you would not because you are from a world of civilization where you believed in your government and leaders, and you did not Northwoods spray innocent people with radioactive weapons to see how they survived or released measles at Disney to create a hysteria to get more funding at NIH and CDC.

This is the crimes against humanity which is taking place, which took place, which made all of our lives hell and killed many of us. Now we find out that we, that is our money is funding the torture of pets, that we all love and cherish.

The evidence is there in the records. This group of human genocidists and pet killers have taken the 21st century back to an age which is beyond human memory. NEVER before have humans in power produced such globalized lethality without anyone standing up and saying THIS IS TOO FAR.

The Soviets had limits, Saddam Hussein had limits. Adolf Hitler had limits, but Barack Obama, Joe Biden and Anthony Fauci have no limits. It is past time that Donald John Trump start earning the trust people placed in him, and begin railing against this and stop sounding like a DIA pied piper leading the American Right over the lemming edge.

As it apparently requires stating, that is evil. It is wrong. It is not human. It requires a legal system to prosecute it and not protect such heinous violations of what is right.

People are saving pets out of Afghanistan. When are Americans going to save pets from Anthony Fauci, Joe Biden and Barack Hussein Obama?