The Return of the Reds 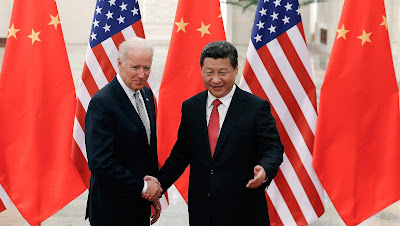 “‘The return of red, the return of heroes, and the return of blood. Therefore, we need to control all cultural chaos and build a lively, healthy, masculine, strong, and people-oriented culture. We need to crack down on the chaos of big capital manipulation, platform monopoly, and bad money driving out good money in the capital market. Guide the flow of funds to entity enterprises, to high-tech enterprises, and to the manufacturing industry.

Americans were lied to in the Cold War. They were told that their industry had to be diversified to foreign nations like the UK, South Korea and Japan, in case a nuclear attack took place, so those industries would not all be destroyed.

The handwriting on the wall is now clear, that this was all part of the London Banking take down of America, by bleeding America in the Cold War in massive weapon spending as Europe, Canada and Australia basked in socialism that Adolf Hitler aspired to.

Once the Frank Roosevelt Lend Lease was reconfiscated to the British Empire, the plug was pulled on the United States. The lynch pin in this was the Bush41 globalist agenda to taking China from a rice paddy communism to a slave labor colony to threaten the world.

China was allowed to steal and was given all the tools to be the threat  to start World War IV.

Fauci-US Involved With 65 'Projects' At
China's Wuhan Lab After Gain Of Function
Was Banned Here In The US!

The link below sources the quotes which started this and follow in the Chinese Communists, or Chicoms have made it party policy to having used capital infusions from the 1% in the West to modernize, that China is returning to the past, the Red Communist Past, in what will dictate the Chinese paper tiger economy from 2021 AD in the year of our Lord onward.

Did China Just Declare War? Interesting
And Concerning - A Warning?

The social media points which dictate in China if one can travel or buy goods, is the old Soviet and Chicom system of absolute control in no one could obtain goods or travel, without the Party's permission. China has been regressing to Maoism with the rise of dictator Xi.

What Peking is gearing up for is a war economy. They are hoarding resources and there is an absolute Nazi Soviet funding system being installed, where the regime takes the money and channels it directly into target industries and systems, leaving all else to degrade.

With stolen technology, Fauci Obama biowarfare weapons and 1% direction of Joe Biden turning Asia over to China in Afghanistan, is producing a streamlined Chinese projection of power as this blog has explained.

China understands first that it must put a leash on it's population to control it. They must propagandize that mass to hate the west and fear it, and then to bring the population to obedience to all Peking mandates.

The world has not changed in necessities of wokeism, nations still need raw materials and oil in order to survive. Germany needed it with Hitler, Japan with Tojo and Peking requires it now.

That means Afghanistan for rare earth materials and the Mideast for oil to fuel the China war economy.

China has a 5 year window to accomplish this before communism causes a massive degradation as Obama Trump Biden has degraded the United States to this Nazi state auditioning for Marxism. Five years is the time frame as China can not survive without capital input and more importantly China has horrid quality control and zero invention. Chinese might will degrade each day from this point on in 2021 AD in the year of our Lord. China will have to move to secure resources, in order to survive, but also to cut off the West and kill it.

There is no longer an economy. There is only looting in debt spending. America will be finished as a debt client in the next years. China can not wait. China must gain control over the west in two resource areas, oil and rare earth elements. That is why China was handed Afghanistan, as a land bridge to Mideast oil.

It will behoove China to annex Alaska with Russian assistance to cut off American and Japanese supply. By doing this Europe will be under blackmail control of Russia and the rest of the world voided of resources as the United States energy supply will not be able to fuel it's own population now overflowing with millions of more Biden Beaners burning gasoline by the cargo tank.

China has already declared war on the United States, decades ago. China has believed the 1% that China will have America and Australia as their colonies. HAARP makes war on American wheat for China and rains to flourish American soybean fields destined for China. China is at this point brainwashing it's populace to war, and after showing it the pretty things in the West, promise their raping hordes that all that White pussy awaits in pretty houses and large lawns if they just join in the extermination of Protestant Christians.

The future of these events is not that far off. This is the prelude as China has already launched biological warfare on the West and is moving to strangle resources and oil to conquer the corpse of nations, instead of having to project mediocre military power to fight that war for the spoil.